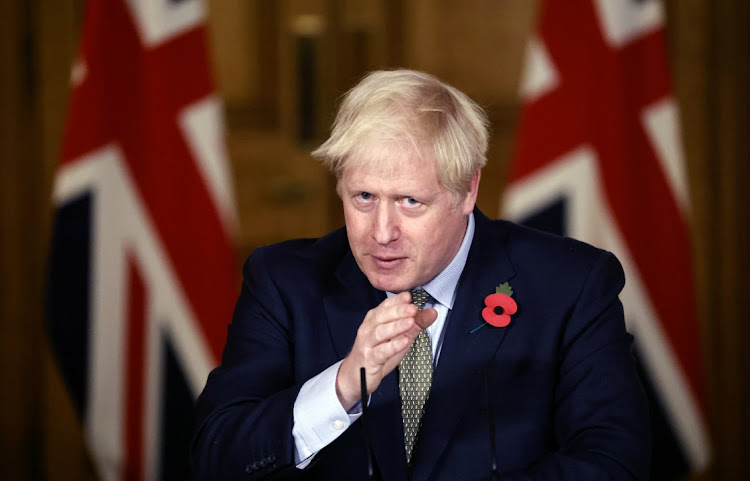 London — Prime Minister Boris Johnson on Monday confirmed England’s national lockdown will end next week, to be replaced by a tougher three-tier system of regional restrictions designed to last until  the end of March in 2021.

Shops, hairdressers and gyms will reopen in all areas and outdoor sporting events will be allowed with as many as 4,000 spectators from December 2, according to the government’s  Covid-19 winter plan document published Monday.

Pubs, bars and restaurants will only be open for takeaway and delivery in those regions placed in tier 3, the highest level of restrictions. Only outlets selling “substantial meals” will be able to serve alcohol in tier 2 — a major blow to many business owners hoping to get back on their feet after lockdown.

In a statement to the House of Commons, Johnson said the government is working with devolved administrations in Wales, Northern Ireland and Scotland for a plan to allow people to see their families at Christmas, with further details expected later this week.

“This will be still a hard winter,” Johnson said. “But we have turned a corner and the escape route is in sight. We must hold out against the virus until testing and vaccines come to our rescue and reduce the need for restrictions.”

The government is expected to announce which regions will be placed into which tiers on Thursday after officials have assessed the latest data on infection levels.

Some MPs from Johnson’s Conservative Party immediately pushed back on the plan, highlighting the damage to people’s health and livelihoods caused by months of restrictions. Johnson is hoping to avoid a sizeable rebellion when MPs vote on the measures early next week.

Graham Brady, chair of the influential 1922 group of rank-and-file Tory MPs, called on the government to publish his assessment of the impact of restrictions “in economic terms and in health terms” — and the “exact criteria” being used for putting regions in different tiers.

Johnson said the previous tier system, before lockdown, did not have a big enough impact on the transmission rate of the disease. “So the scientific advice, I am afraid, is that as we come out is that our tiers need to be made tougher,” he said.

This means that in tier 3, indoor entertainment such as cinemas, ten-pin bowling and bingo will be banned, along with pubs and restaurants. Large events will also be prohibited in tier 3 areas.

Johnson also unveiled plans to ditch the strict 10pm curfew for pubs, saying last orders will now be at that time but people will be allowed until 11pm to finish their drinks.

Pandemic estimated to force the government to borrow about £372bn (R7.6-trillion) for the financial year ending April 2021
Opinion
10 months ago

The UK home secretary Priti Patel has apologised and will keep her position, but an independent adviser has resigned due to Johnson’s stance
World
10 months ago