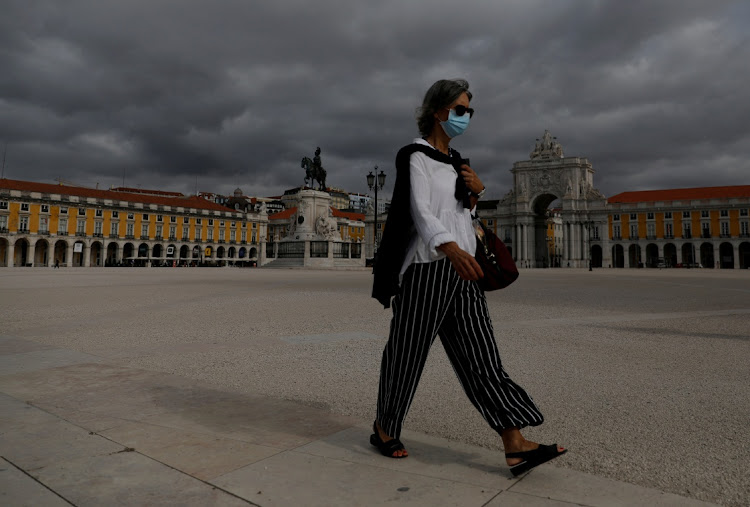 Lisbon  —  Tougher measures will be imposed in Portugal from Thursday to contain record levels of coronavirus cases, including stricter limits on gatherings and heavier penalties for rule-breaking establishments.

Prime Minister Antonio Costa will also submit a proposal to parliament to make face masks compulsory in crowded outdoor spaces, and use of the government's tracing app compulsory for some workforces.

“I know many people are tired of the restrictions,” Costa told a news conference on Wednesday.

“I also know many people, particularly the young, have a false perception that Covid-19's risks are lower for them. But this perception is an illusion. Covid-19 carries a risk for you but it also carries an enormous risk of transmission to others.”

From Thursday, gatherings will be limited to five people. Weddings and baptisms can be attended by a maximum of 50, but university parties will be banned.

Portugal, a nation of just more than 10-million people, initially won praise for its quick response to the pandemic, recording a comparatively low 91,193 confirmed coronavirus cases and 2,117 deaths, but cases have crept back up.

On Wednesday, the country hit 2,072 daily cases, the highest number of infections in a single day since the pandemic started, according to health authority DGS, though testing rates have also increased.

There were nearly 400 localised outbreaks reported across the nation, DGS said, adding most of the coronavirus cases were concentrated in and around the capital Lisbon and in the country's northern region.

Costa said the government was not afraid of imposing further restrictions if the spread of the outbreak did not slow.

During a separate news conference, health minister Marta Temido told those hoping to return to their pre-Covid-19 lives the “disease has not vanished”.

“We will all be put to a very tough test,” she said.

The pandemic is set to leave lasting scars on the Portuguese economy, with the government predicting GDP to contract 8.5% in 2020.

Elsewhere,  Italy  registered 7,332 new coronavirus infections over the past 24 hours, the country's highest-ever daily tally and steeply up from 5,901 on Tuesday. There were also 43 Covid-related deaths on Wednesday against 41 the day before — far fewer than at the height of the pandemic in Italy in March and April when a daily peak of more than 900 deaths was reached.

Prime Minister Giuseppe Conte said on Tuesday he was determined to avoid a new general lockdown, however some of the country's most prominent scientists say closing down the country again may be the only way to stop the spread of infections.

Patrizio Pezzotti, an epidemiologist at Italy's Superior Health Institute, said in an interview with daily La Stampa that he expected 100 Covid-19-related deaths a day within a couple of weeks.

Britain reported 19,724 new cases on Wednesday, a rise of 2,490 from the day before, government data showed, as new local restrictions were due to be brought in for some areas of the country. The figures also showed there were 137 deaths within 28 days of a positive test, down slightly from Tuesday when there 143 were recorded.

In Belgium, officials feared hospitals  could run out of intensive care unit (ICU) beds by the middle of November if the new Covid-19 wave continues at its current rate.

The number of patients in ICUs is doubling every twelve days — to 281 as of Tuesday — and hospitals in Brussels have been ordered to reserve 50% of beds for coronavirus patients.

“This scenario must be absolutely avoided,” he said. "There is no need to panic. We are not in the same situation that we went through in March and April: we know the virus better and we know what needs to be done to control it — but we must do it.”

Covid-19 has claimed 10,244 lives in Belgium, one of the highest per capita fatality rates in the world.

Brussels, which houses EU institutions and the headquarters for Western military alliance Nato, is seeing 20% of tests return positive. The federal government will meet on October 16 to decide on additional restrictive measures.

A 25-year-old man living in Nevada, US became infected with two different genetic variants of the SARS-CoV-2 virus in less than two months
World
11 months ago

The message from the most powerful central banks is increasingly clear: there are limits to what monetary policy can do to help in the short run
World
11 months ago

Most people do not want to return to the office

Only 5% of those surveyed worked from home most of the time before the lockdown, but now 87% want the ability to choose where, how and when they work
World
11 months ago
Next Article