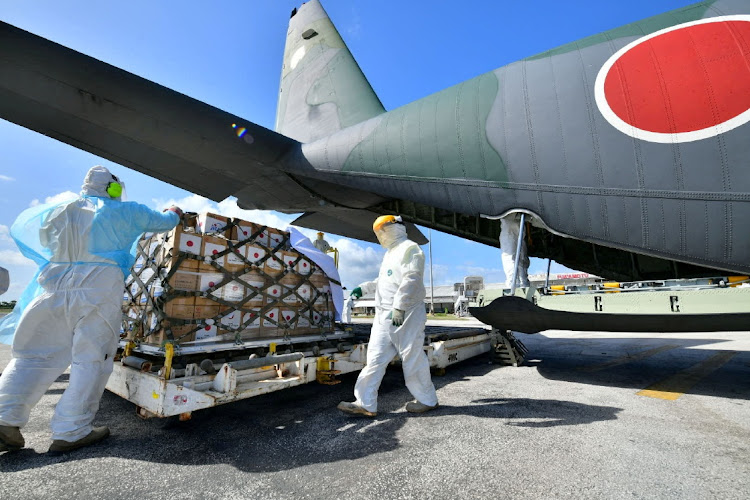 Relief supplies are unloaded from Japan Self-Defense Forces' C-130 Hercules after the airplane arrived at Fua'amotu International Airport on the island of Tongatapu, Tonga on January 22 2022. Picture: JAPAN DEFENSE MINISTRY via REUTERS

Sydney — Pacific island nations that are some of the last places in the world to be hit by the coronavirus pandemic are recording a growing number of Covid-19 cases, prompting a rush to provide vaccines, medical teams and food aid.

Concern about the detection of the coronavirus in tsunami-hit Tonga, where one new case was recorded on Friday, has been heightened by thousands of infections sweeping neighbouring Pacific islands.

In the Solomon Islands, where riots, not connected to the pandemic, saw buildings in the capital, Honiara, burn in November, an outbreak of the Delta strain with 2,357 cases has overwhelmed the health system, aid agencies say.

Australia has sent four defence flights to the Solomon Islands over the past two weeks with a medical team, vaccines, and emergency food for hospital patients and tens of thousands of households.

Katie Greenwood, head of delegation for the International Federation of Red Cross Pacific, said cases had taken off rapidly in the Solomon Islands, where just 11% of the population was fully vaccinated.

“People are scared and its affecting everyone,” she said. “Fragile health systems get overwhelmed very quickly.”

The Solomon Islands government has reported 21 deaths from Covid, and imposed restrictions on movements.

Solomon Islands National University professor Transform Aqorau said Honiara has been shut off, causing a scarcity of fresh food, and he had been eating from one plant in his garden.

“They have blocked Honiara in, vendors from outside can't come in,” he told Reuters by phone.

He credited essential workers for keeping the power and water running, despite increasing numbers of staff testing positive and needing to isolate.

The rush for vaccination had also caused crowding with “a high level of lack of obedience to social distancing”, he said.

Vaccination sites closed from Wednesday to prevent the spread of the virus to health workers and the public, the health ministry said in a statement, adding it would “restrategise” distribution.

An Australian medical team has also been sent to Kiribati, which has 913 cases after allowing a flight with returning nationals to land in January, its first outbreak since lifting border restrictions.

Tonga recorded its first community transition of Covid-19 on Tuesday, after two workers at a cargo wharf were infected. There are now five cases.

An influx of tsunami aid brought by foreign navy ships has been delivered without contact with Tongan people, and pallets are quarantined for 72 hours.

Greenwood said Pacific islands had worked hard for two years to keep Covid out but new strains were more virulent and harder to detect. “There may be a small chink in the armour that allows Covid to get in,” she said.