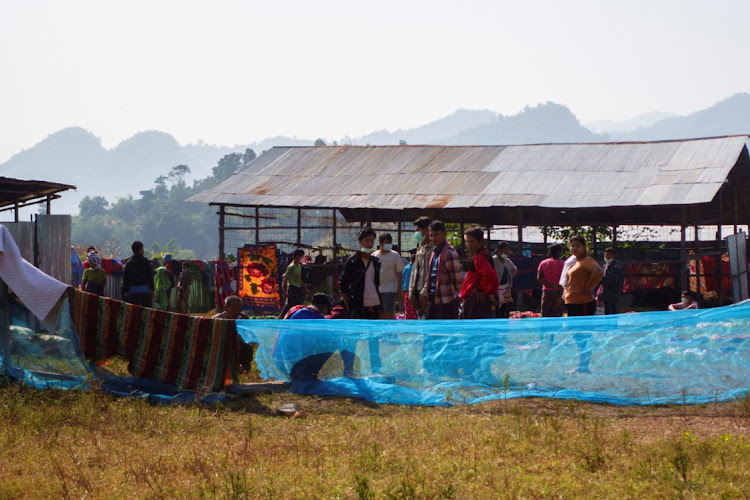 Refugees, who fled a flare-up in fighting between the Myanmar army and ethnic minority rebels, stand at a temporary shelter in Mae Sot district, Tak province, Thailand on December 20. Picture: REUTERS

Myanmar’s oldest rebel force wants international help to establish a no-fly zone near the Thai border, after warning of a danger of clashes with the army and civilians being targeted by air strikes.

There has been an escalation in fighting recently between the army and the Karen National Union (KNU), prompting thousands of people to seek refuge in Thailand.

About 3,400 people have taken shelter in Thailand over recent days, Thai authorities said. Thousands more are stranded on the Myanmar side of the border, waiting to cross.

In a statement released this week, the KNU warned of a “high possibility” of military air strikes on civilians.

A spokesperson for Myanmar's military junta did not answer calls seeking comment.

The KNU urged the international community to identify a no-fly zone by seeking an emergency meeting of the UN Security Council.

Last month, the UN Security Council, in a rare statement agreed on by its 15 members, expressed concern over violence across Myanmar and urged the military to exercise utmost restraint.

International efforts to end the conflict in Myanmar since a February coup have been limited to diplomatic initiatives and attempts to exert economic pressure through Western sanctions.

Since the military overthrew the civilian government led by Aung San Suu Kyi, the Assistance Association for Political Prisoners (AAPP) has said that security forces killed more than 1,300 people.

The military has said the figures from AAPP, a monitoring group cited by the UN, are exaggerated.

The KNU agreed to a ceasefire in 2012, ending an insurgency for self-determination that began soon after Myanmar gained independence in 1948, but its forces have been clashing with the army since the coup and it let opponents of the coup to take shelter in territory it controls.

The latest fighting was triggered by army attempts to arrest people in the Lay Kay Kaw area, said Saw Taw Nee. “They came and checked on the town which we allow. However, they didn’t keep their promise, and arrested people which we totally don’t accept,” he said.

The KNU said three of its fighters and 15 government soldiers were killed in the clashes. Reuters could not independently verify the account.

Myanmar court defers the latest verdicts in the trial of ousted leader Aung San Suu Kyi to December 27, according to a source familiar with the ...
World
5 months ago

Hundreds of people including many children have fled a flare-up in fighting between the Myanmar army and an ethnic minority insurgent group, taking ...
World
5 months ago
Next Article