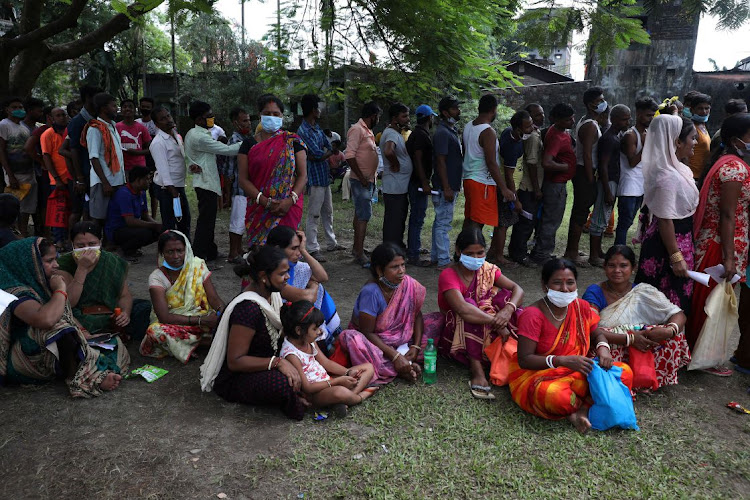 People wait in a queue to receive a dose of COVISHIELD vaccine, manufactured by Serum Institute of India, outside a vaccination centre in Siliguri, in the eastern state of West Bengal, India, October 7 2021. Picture: REUTERS/RUPAK DE CHOWDHURI

India will soon have administered 1-billion Covid-19 vaccine doses, but the milestone masks a yawning gap between the number of people who have been fully inoculated and those that have had just one shot.

While it is likely to hit the billion-doses mark this week, the country has only given two shots to nearly 21% of its population of about 1.4-billion, according Bloomberg’s vaccine tracker. By comparison, 51% have had a single dose, making it one of the highest disparities in the world, the tracker shows.

Neighbouring China, the only nation to dish out more vaccine doses than India, has fully inoculated some 1.05-billion, or 75% of its citizens, up to late September.

Health experts pin the lopsided statistic on a mix of factors. Home to the world’s most devastating Covid-19 outbreak earlier this year, India has seen cases ebb the past few months, dimming the urgency to get vaccinated. The country had administered almost 987-million doses by Tuesday.

In rural areas, government welfare is tied to having just one shot, with some having to travel long distances to return for the second dose. The large number of children yet to be covered by the vaccine programme also contributes, as does the comparatively long three-month gap health authorities advise between two doses of AstraZeneca’s shot, the predominant vaccine deployed in India.

“Adherence was noted to be an issue in all two-dose clinical trials run in India,” said Bhramar Mukherjee, a professor at the University of Michigan’s School of Public Health. “So the widening gap is due to both the spacing between two doses and non-adherence.”

The disparity is of concern because while infections have come off the highs reached in early May, India is still seeing more than 13,000 new cases every day and hundreds of deaths.

“When cases are as low as they are right now, the level of enthusiasm and the level of urgency to be vaccinated may wane,” said Brian Wahl, a New Delhi-based epidemiologist at the Johns Hopkins Bloomberg School of Public Health, which has worked on a campaign to boost vaccine confidence with a medical college in the north Indian city of Chandigarh.

Hesitancy is potentially acute in India’s countryside, where about two-thirds of the population lives with limited access to poorly-funded health facilities. Many state governments have made the first-shot vaccination certificate a de facto requirement for accessing welfare programmes, including a food ration system that many poor and rural-dwelling families depend on. There are no equivalent requirements attached to receiving the second dose.

Government officials have been following up with people about their second shot, but it can be difficult to make them return as well as to convince those who are hesitant, said Wahl. “The further progress you make, the more challenging it is to get higher and higher levels of coverage.”

Nevertheless, Wahl expects the gap to narrow in coming weeks. A slew of Indians are slated to get their second AstraZeneca shot after a long wait to get their first in the summer, when the vaccine’s local manufacturer, the Serum Institute of India, began to gear up its production.

Also skewing the statistics is that India is yet to deploy any vaccines for those under 18, some 40% of India’s population. That may change soon. One locally developed inoculation has been approved for over 12s, but has not started to be administered yet. The country’s drug regulator is also reviewing another shot for those as young as two.

Prime Minister Narendra Modi’s government is aiming to fully vaccinate India’s adult population by year-end. Until then, health authorities hope the vaccines already deployed, as well as natural immunity built up by an estimated two-thirds of the population, will hold the line.

But risks remain. “In pockets where we are not seeing the same high level of immunisation, there’s a threat you could see smaller outbreaks,” Wahl said. “Immunity does wane over time. Continuing to keep up with the immunisation campaign is important.”