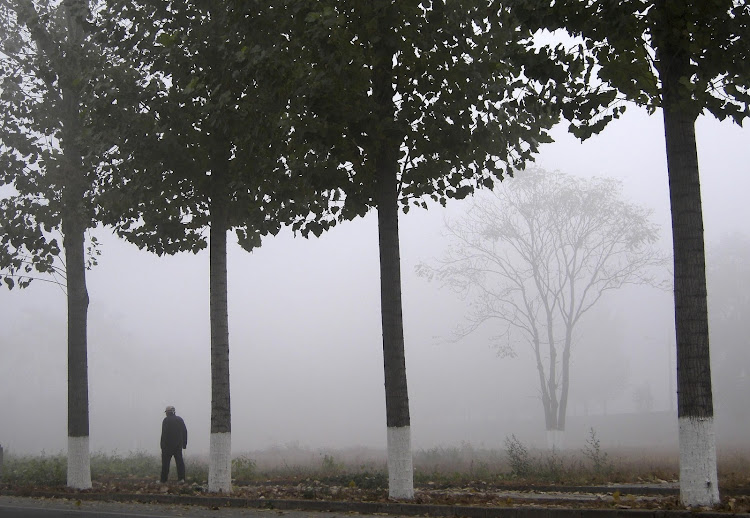 A man walks in the dense smog of Beijing, China, where harsher curbs on new car sales are to be introduced to tackle pollution. Picture: REUTERS

When Beijing hosted the 2008 Summer Olympic Games, China was determined to welcome visitors from around the world with blue skies and fresh air. Authorities shut down or cut production at almost all the factories in and around the capital. The government launched measures to cut traffic congestion by half that are still in place today.

Operation “Olympic Blue” worked. The city notorious for its smog was transformed for an entire month. More than a decade later, China has to pull off the feat again when it hosts the winter games next year. This time might be more challenging.

President Xi Jinping has made cleaning up the environment a priority since he came to power in 2013. That’s included advancing the Blue Sky action plan, which sets air quality targets for each district in Beijing, and implementing measures to cut pollution. By the end of 2020, coal stoves in 25-million households had been replaced with gas or electric. Tens of thousands of factories have been fined for exceeding their emissions limits since a government crackdown starting in 2017. The share of heavily polluted days experienced nationwide in 2020 was half that of 2015, falling in main regions including Beijing.

The Chinese government pledged in March to “basically eliminate” heavy pollution days by 2025, though progress remains patchy. A report this month by the Centre for Research on Energy and Clean Air (CREA) showed that more than 80 cities experienced five or more such days in 2020, in spite of pandemic lockdowns.

Beijing is also behind on its air quality targets. In the first quarter of this year, the average concentration of deadly PM2.5 particles was 21% higher compared with the same period in 2019, according to CREA.

China’s post-pandemic recovery is driving the increase in emissions. Production of steel, cement and thermal power outpaced GDP growth in the first quarter, CREA’s research showed, as the world’s second-biggest economy makes up for lost time. Earlier this year the environment ministry found steel mills near Beijing that had been told to halt activity to lower pollution were operating illegally and had falsified production records.

There are two ways for China to cut pollution during the Olympics, said Lauri Myllyvirta, an analyst at CREA. The government could either continually cut emissions throughout the year, or shut factories and limit traffic during the Olympics like it did before. The latter way might seem easier in the short term, but sustained progress needs “a move away from coal and oil, as well as reduced reliance on the most polluting heavy industries, such as coal-based steelmaking”, he said.

The costs of abruptly shutting down industrial activity in 2008 may be too enormous to repeat. The short notice caused the economy big damage, said Ma Jun, director of the Institute of Public & Environmental Affairs. China “faces a lot of pressure to keep the air good for the whole period of the games”, said Ma. “If gradual measures to reduce emissions and control air pollution fail to be implemented, then China would have to do the same thing it did the last time, which nobody wants to see.”

Hosting the games in the colder months rather than the summer also means contending with more challenging weather conditions and higher emissions from heating homes and offices.

And there’s a new uncertainty: dust storms. Last week Beijing battled its fourth big sandstorm since March as strong winds blew in dust from desert areas to the north. Government officials and meteorologists attributed the events to overgrazing and mining in Mongolia, along with more extreme weather this spring, including less rain and snow, frequently alternating warm and cold spells, and heavy winds.

“If the sandstorms are as bad next year, there’s nothing people can do to improve the situation immediately,” said Ma. “It’s important to protect the environment and fragile ecosystem on the Mongolian plain, but the good effects will take time.”