Views diverge on what to do about military takeover and massacres 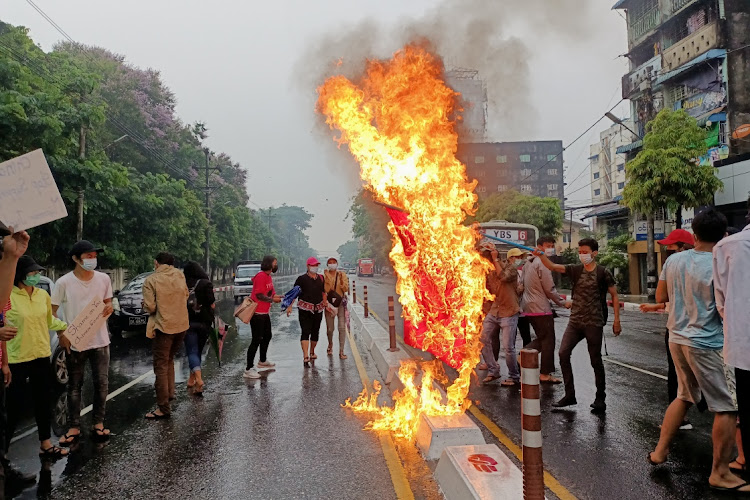 Demonstrators in Myanmar held protests demanding the restoration of Aung San Suu Kyi’s government on Monday and called for more co-ordinated nationwide dissent against the military junta, as regional nations prepared for talks on the crisis.

Six people were killed at the weekend, said activists, as police and soldiers forcefully broke up demonstrations that some protesters are calling a “spring revolution”.

At least 564 people, including 47 children, have been killed by security forces during protests against the February 1 coup, an activist group has said. The movement has included street marches, a civil disobedience campaign of strikes and quirky acts of rebellion organised on social media.

Activists called for a nationwide clap later on Monday in appreciation of those ethnic minority armed groups that are supporting the democratic cause, and young demonstrators who have been at the vanguard of protests, trying to shield or rescue people wounded by security forces.

“Lets clap for five minutes on April 5, 5pm [12.30 SA time] to honour Ethnic Armed Organisations and Gen Z defence youths from Myanmar including Yangon who are fighting in the revolution … on behalf of us,” Ei Thinzar Maung, a protest leader, posted on Facebook.

Besides the brutal crackdown on street protests, the junta has sought to suppress the campaign by shutting down wireless broadband and mobile data services.

Brunei, the chair of the Association of Southeast Asian Nations (Asean) countries, on Monday threw its support behind a regional leaders’ meeting to discuss developments in Myanmar and said it has asked officials to prepare for a meeting of the 10-nation bloc in Jakarta.

After talks between Malaysian Prime Minister Muhyiddin Yassin and Brunei Sultan Hassanal Bolkiah, Brunei said both countries have asked their ministers and senior officials to undertake “necessary preparations for the meeting that will be held at the Asean Secretariat in Jakarta, Indonesia”.

No date was given.

Asean operates by consensus but the divergent views of its members on how to respond to the Myanmar army’s use of lethal force against civilians and the group’s policy of non-interference has limited its ability to act.

Malaysia, Indonesia, the Philippines and Singapore have all expressed alarm over the killings of demonstrators and support an urgent high-level meeting on Myanmar. Besides Brunei, the other members are Myanmar itself, Thailand, Laos, Vietnam and Cambodia.

Earlier on Monday, demonstrators with placards of Suu Kyi and signs asking for international intervention marched through the streets of Myanmar’s second-biggest city, Mandalay, images posted on social media showed.

The junta said comments by UN special envoy Christine Schraner Burgener of an impending “bloodbath” in Myanmar were inaccurate and misleading. “Ms Burgener’s remarks contravene the basic principles of sovereignty, and the fact that the United Nations is meant to work towards peace and stability of the world’s nations,” it said in a notice published in the state-run Global New Light of Myanmar newspaper.

Schraner Burgener told a closed session of the 15-member Security Council on March 31 that the council must consider “potentially significant action” to reverse the course of events as “a bloodbath is imminent”, according to comments published by UN News.

The junta said the remarks were “a far cry from reality and could delay and destabilise the efforts by the State Administration Council to establish a genuine and disciplined multiparty democracy”.

The coup and crackdown on demonstrations have caused an international outcry, prompting Western sanctions on the military and its lucrative businesses.

Fitch Solutions said on Monday that a conservative forecast for Myanmar’s economy would be a 20% contraction in the fiscal year that started in October, instead of the 2% seen before the coup.

External pressure is growing on the military to stop the killings, with some countries calling for it to cede power and free all detainees, and others urging dialogue and new elections soon.

A total of 2,667 people have been detained under the junta, the Association for Political Prisoners (AAPP) activist group said on Monday. The junta at the weekend announced arrest warrants for about 60 celebrities, social media influencers, models and musicians on charges of incitement.

The military, which ruled with an iron first for half a century until 2011, has seen hostilities with armed ethnic minorities reignite on at least two fronts, raising fears of growing conflict and chaos in the country.

The Karen National Union, which signed a ceasefire in 2012, has suffered the first military air strikes on its forces in more than 20 years, resulting in thousands of refugees pouring into Thailand. Fighting has also raged between the army and ethnic Kachin insurgents in the north.