Several buses full of prisoners drove out of Yangon’s Insein jail in the morning, said witnesses 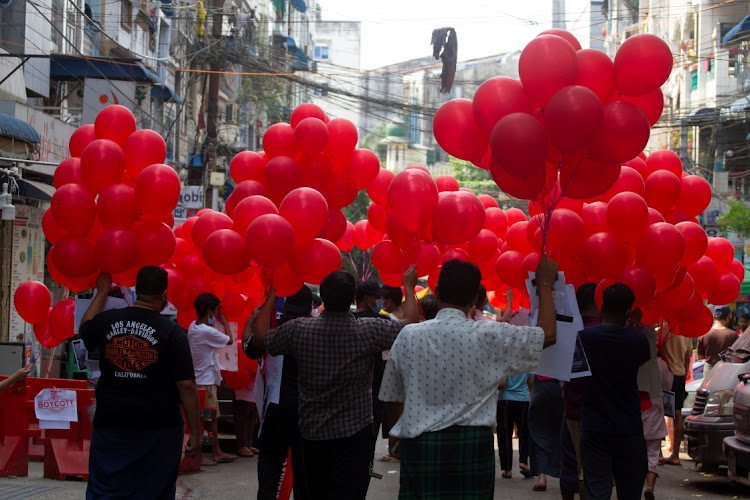 Protesters prepare to release red balloons during a protest against the military coup in Yangon, Myanmar, on March 24 2021. Picture: REUTERS

Myanmar’s junta freed hundreds of demonstrators arrested during its brutal crackdown on protests on Wednesday, while many businesses in Yangon remained shut and streets were deserted after anticoup activists called for a silent strike.

Several buses full of prisoners drove out of Yangon’s Insein jail in the morning, said witnesses, who included lawyers for some inmates.

There was no immediate word from authorities on how many prisoners were freed. A spokesperson for the military did not answer calls.

“All the released are the ones arrested due to the protests, as well as night arrests or those who were out to buy something,” said a member of a legal advisory group who said he saw about 15 buses leaving.

The Assistance Association for Political Prisoners (AAPP) activist group says at least 2,000 people have been arrested in the military crackdown on the protests against the February 1 coup.

Many businesses were closed in Yangon, and few vehicles were seen on the road in the country’s biggest city, witnesses said, after a call by pro-democracy activists for a silent strike.

“No going out, no shops, no working. All shut down. Just for one day,” Nobel Aung, an illustrator and activist, said.

“The usual meat and vegetables vendors on the street didn’t show up,” said a resident of the city’s Mayangone district. “No car noises, only birds.”

A teacher in the Kyauktada district said the roads were deserted. “There aren’t many people in the streets, only water delivery men,” the resident said.

The strike comes a day after staff at a funeral service in Mandalay said that a seven-year-old girl had died of bullet wounds in the city — the youngest of about 275 people killed in the bloody crackdown, according to the AAPP.

Soldiers shot at her father but hit the girl who was sitting on his lap inside their home, her sister told the Myanmar Now media outlet. Two men were also killed in the district, it said.

The military had no immediate comment on the incident.

The junta has faced international condemnation for staging the coup that halted Myanmar’s slow transition to democracy and for its lethal suppression of the protests that followed.

It has tried to justify the takeover by saying a November 8 election won by Aung San Suu Kyi’s National League for Democracy (NLD) was fraudulent — an accusation the electoral commission has rejected. Military leaders have promised a new election but have not set a date and have declared a state of emergency.

Junta spokesperson Zaw Min Tun said on Tuesday 164 protesters had been killed and expressed sadness at the deaths, a day after the EU and the US imposed more sanctions on groups or individuals linked to the coup.

He blamed the bloodshed on the protesters and said nine members of the security forces had been also killed.

He said strikes and hospitals not fully operating had caused deaths, including from Covid-19, calling them “undutiful and unethical”.

Opponents of military rule have regularly called for strikes and also a civil disobedience campaign, including among civil servants, that has paralysed parts of the economy.

The junta spokesperson also accused media of “fake news” and fanning unrest and said reporters could be prosecuted if they were in contact with the Committee Representing the Pyidaungsu Hluttaw (CRPH), as the remnants of Suu Kyi’s government is known. The military has declared the CRPH an illegal organisation and said membership is punishable by death.

Suu Kyi, who won the Nobel Peace Prize in 1991 for her campaign to bring democratic civilian rule to Myanmar, has been in detention since the coup and faces charges that her lawyer says have been cooked up to discredit her.

The ousted leader is due to appear for another court hearing via video conferencing on Wednesday after a previous hearing had to be adjourned due to internet problems.

Scores of politicians, officials and activists are taking part in the struggle for control of the country
World
1 month ago