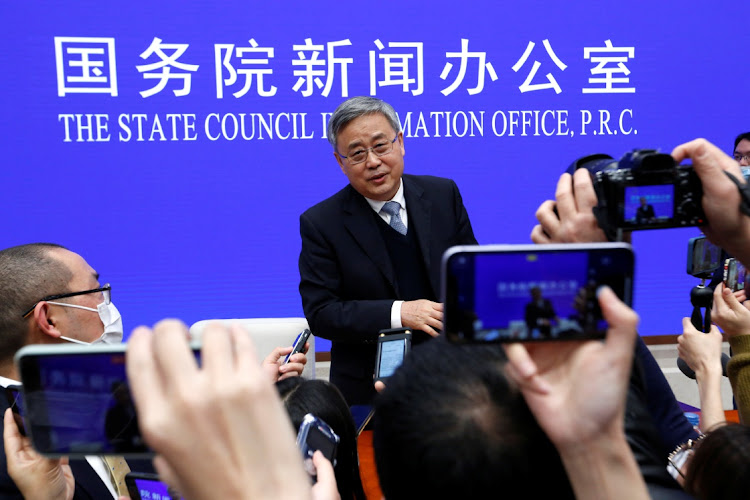 For investors fretting about an end to the era of cheap and plentiful debt, China just provided another reason to worry.

The nation’s top banking regulator jolted markets on Tuesday with a warning about the need to reduce leverage amid the rising risk of bubbles globally and in the local property sector. The impact on Chinese stocks was swift: the CSI 300 Index fell as much as 2.1% to lead declines in Asia, while Kweichow Moutai, the biggest contributor to gains during 2020’s stimulus cycle, tumbled almost 5%. China’s largest stock has lost more than $100bn in nine days.

Guo Shuqing, chair of the China Banking and Insurance Regulatory Commission and Communist Party secretary of the central bank, didn’t mince his words. “From a banking and insurance industry’s perspective, the first step is to reduce the high leverage within the financial system,” Guo said at a briefing in Beijing. Speculation in the property market is “very dangerous” and bubbles in US and European financial markets may soon burst, he said.

Central banks around the world are facing the challenge of when and how to pare back stimulus as economies recover from the pandemic. Global bond markets plunged last week as traders pulled forward bets on interest rate increases, with the 10-year Treasury yield reaching the highest in a year.

Deleveraging has particular resonance in China, where it is a key priority of President Xi Jinping due to the size of the nation’s debt mountain. A crackdown on leverage in 2017 sent corporate and government bond yields to multiyear highs before officials halted the drive a year later amid the worsening trade war with the US.

A stronger economy and signs of excess have provoked stronger rhetoric from Beijing in recent weeks. The People’s Bank of China said in its latest monetary policy report it will balance the need to support growth and prevent risk. A front-page report in state media last week argued the economy is strong enough to withstand policy normalisation. In January, the central bank engineered the biggest cash squeeze since 2015, after an adviser suggested a shift away from stimulus.

Debt was about 280% of China’s GDP in November, the highest ratio since Bloomberg started compiling the data in 2014.

Beijing is set to unveil its major economic goals on March 5, when the National People’s Congress, China’s rubber-stamp parliament, convenes for its yearly meeting. While officials have stressed that changes in policy would be gradual, China’s monetary policy conditions “will visibly tighten this year”, Li-Gang Liu, MD and chief China economist at Citigroup wrote in a report this week.

The prospect that China will tighten funding conditions is derailing gains in the country’s most popular stocks. Liquor makers such as Moutai are hardest hit because they are widely owned and command some of the highest valuations. The CSI 300 Index — which in February briefly topped its record close from 2007 — has lost 7.9% since mainland markets reopened for the new Lunar Year.

Authorities are juggling curbing leverage while maintaining economic growth before the Communist Party’s 100-year anniversary in 2021. The central bank has successfully calmed interbank funding markets since January, when short-term rates spiked to the highest since 2015.

“Deleveraging and financial risk mitigation will both stay in policy focus in 2021,” said Tianhe Ji, a strategist at BNP Paribas SA in Beijing.

The president celebrated 10-million people now out of poverty, largely in a bid to cement his popularity before staying on for a third term
World
7 months ago

THE JAPAN TIMES: China seeks co-operation on its own terms

THE JAPAN TIMES: China seeks co-operation on its own terms