Tornadoes rip through six US states on Friday night, leaving a trail of death and destruction 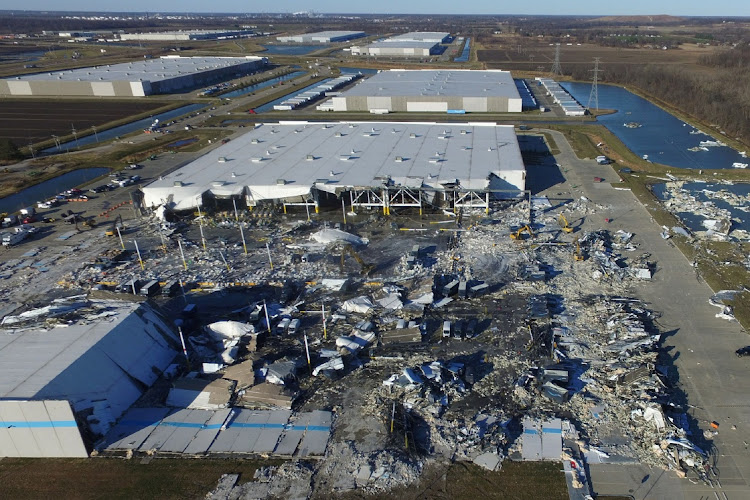 The site of a roof collapse at an Amazon.com distribution centre a day after a series of tornadoes dealt a blow to several US states, in Edwardsville, Illinois, the US, December 11 2021. Picture: DRONE BASE/REUTERS

Six Amazon.com workers were confirmed dead on Saturday after tornadoes roared through a warehouse near St Louis, ripping off its roof and causing 11-inch thick concrete walls longer than football fields to collapse.

At least 45 Amazon employees made it out safely from the rubble of the big facility in Edwardsville, Illinois, said facility, fire chief James Whiteford. Authorities had given up hope of finding more survivors as they shifted from rescue to recovery efforts that were expected to last days.

Tornadoes ripped through six US states on Friday night, leaving a trail of death and destruction at homes and businesses stretching more than 300km. Reports said up to 100 people could have been killed.

The Amazon facility was hit at about 8.38pm central time, Whiteford said. The force of the winds was so severe the roof was ripped off and the building collapsed.

Witnesses said workers were caught by surprise and forced to take shelter anywhere they could find it.

“I had a co-worker who was sending me pictures when they were taking shelter in the bathroom, basically anywhere they could hide,” said Alexander Bird, who works at a warehouse across the street.

“People had to think on their feet quick.”

Amazon said all employees were normally notified and directed to move to a designated, marked shelter-in-place location when a site was made aware of a tornado warning in the area.

Emergency response training is provided to new employees and reinforced throughout the year, the company said.

It was not clear how many workers were still missing, as Amazon did not have an exact count of people working in the sorting and delivery centre at the time the tornadoes hit, Whiteford said.

Colleagues and family members desperate for news about loved ones gathered outside the mess of concrete and steel.

Amazon truck driver Emily Epperson, 23, said she was anxiously waiting for information on the whereabouts of her workmate Austin McEwan late on Saturday afternoon to relay to his girlfriend and parents.

“We’re so worried because we believe that, you know, he would have been found by now,” she told Reuters.

One mother told a St Louis news station that her son Clayton Cope, a 29-year-old maintenance worker, was dead. Police were yet to officially release the names of the dead.

“Everyone assumes they will be safe at work,” said Illinois Governor JB Pritzker. “We don't think that they will never come home.”

Pritzker said he had been in contact with Amazon executives, who pledged financial support for the community.

Earlier Amazon CEO Andy Jassy posted on Twitter that the company was “heartbroken over the loss” of its staff members and would continue to work closely with local authorities on the rescue efforts.

Amazon founder Jeff Bezos echoed Jassy in a statement shared on Twitter later on Saturday, in which he pledged the company’s support to the community.

“All of Edwardsville should know that the Amazon team is committed to supporting them and will be by their side through this crisis,” Bezos wrote.

The billionaire had been in Texas earlier in the day to greet astronauts, including the daughter of pioneering astronaut Alan Shepard and former NFL star Michael Strahan, as they returned from a space trip aboard his Blue Origin rocket.

“It gives me shivers,” said Kathie Burnett, 67, who worked as an Amazon delivery driver until two weeks ago, when she quit because of health reasons.

“I would have been standing right in the middle of that track,” she said, pointing to what remained of the facility. “There would have been 100 trucks in there last night and you didn’t see one this morning, did you?”

Alphabet, Meta and Amazon account for more than half of all advertising spending outside China, says ad agency GroupM
Companies
6 months ago

Employers might want to act more like UPS when it comes to their workforce, particularly to the extent they believe the days of loose labour markets ...
Opinion
7 months ago

The available information ‘is screaming for an investigation’, Eric Frumin, the Strategic Organizing Center’s health director, says
News
7 months ago
Next Article