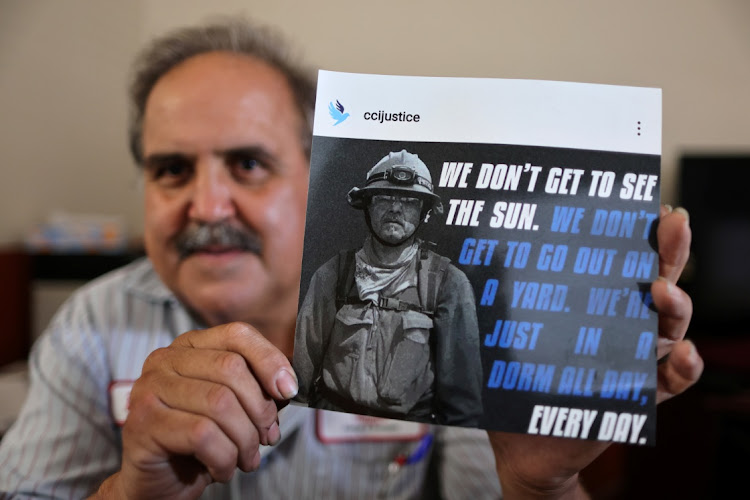 Santa Ana — Leonel Sanchez thought he was about to go home to his family after serving three-and-a-half years for assault and other crimes in California, saying he felt redeemed after he started reading the Bible, attending Alcoholics Anonymous and fighting wildfires as a prisoner.

Instead of walking free, he became one of the 1,500 foreign-born California prisoners who earn their release each year, only to be transferred to federal detention and told they may be kicked out of the country. He is in US immigration and customs enforcement custody, likely to be deported to Mexico, a country he left at age 10 and where he has no friends or known relatives.

In an atmosphere still charged by Trump-era rhetoric linking immigration and violent crime, some Californians may have little sympathy for the foreign-born who can be deported because of felony convictions. But advocates for people such as Sanchez question whether it serves justice to punish them a second time or send them away regardless of their individual circumstances, the rehabilitation they sought on the inside, or the conditions in their homelands.

A proposal to bar California prison authorities from handing people over to immigration and customs enforcement is making its way to the governor's desk. The so-called Vision Act, which has been criticised by law enforcement groups, would even ban identifying those eligible for deportation.

Sanchez, 51, had his state sentence reduced because of good behaviour that also led to a prized assignment for incarcerated people — fighting wildfires.

About a month before his December 2019 release date, Sanchez learnt he would not soon see his grandchildren and restart his old job as a mechanic.

“I thought I was going to walk away a free man because of what I was doing. I was contributing to the communities, you know, helping. Fighting fires, saving property and animals, people’s homes and stuff,” Sanchez said by telephone from detention in the Yuba county jail.

California state assembly member Wendy Carrillo, a Democrat from Los Angeles, introduced the Vision Act to close loopholes in the state’s 2017 “sanctuary law”, which seeks to stop state and local police from aiding federal immigration enforcement. Carrillo said transferring people who serve their time to immigration and customs enforcement “has created a two-tiered system in which Californians are treated differently based on where they were born”.

Oregon, Illinois and Washington, DC, have passed similar laws, arguing in part that immigration enforcement is a federal, not a state, responsibility.

The California state sheriffs’ Association, outlining its opposition in a letter to Carrillo, said the bill would “impede law enforcement co-ordination”. The California Police Chiefs Association said opposing the bill last week that 60% of released felons will be arrested again.

California state assembly member Steven Choi, a Republican whose district borders Santa Ana, the city where Sanchez grew up, said: “The state of California should not get in the way of our federal immigration authorities from deporting violent, dangerous felons.”

Immigration and customs enforcement acting press secretary Paige Hughes declined to comment on pending legislation, but said her agency remained “committed to our public safety mission and will continue to seek out dangerous criminals”.

‘He made a mistake’

The Vision Act passed the assembly in June and is expected to pass the state Senate soon, probably reaching Democratic governor Gavin Newsom before the September 14 recall election he faces. Newsom would not have to sign it until after the election.

A spokesperson for Newsom declined to say whether the governor planned to sign the bill.

Sanchez’s lawyers want federal judges ruling on his immigration status to consider that he has the support of his family and his coworkers at Danny’s Auto Service in Santa Ana. Danny de la Torre, owner of the shop where Sanchez worked for 20 years, would welcome him back.

“He made a mistake,” De la Torre said. “We’re all entitled to a second chance. The problem is his background, his homies, from back in the day.”

Sanchez grew up in rough neighbourhoods of Santa Ana, surrounded by gang violence, and had run-ins with the law, including misdemeanour battery for a domestic dispute, gun possession, shooting at a car and driving under the influence of alcohol. He said he regrets the day in 2016 he pulled a machete and then a gun on people he believed to be gang members who had attacked him two months before. No-one was hurt. He was sentenced to six years.

Upon joining the inmate firefighter corps, he fought fires in Yosemite National Park and the Donnell, Ferguson, and Bear Creek fires for $24 a day for active fires, or $1.65 a day when there was no fire. The work, for which prisoners volunteer, offered relative freedom and good food.

“Nice ribs. Burgers and stuff. It was like a privilege,” Sanchez said.

Odds are likely he will be deported. About 81% of the average of 1,576 foreign-born inmates in California turned over to immigration and customs enforcement each of the past three years have been deported or are pending deportation, according to a California senate appropriations committee staff report. Many are legal permanent residents, or green-card holders. Sanchez’s temporary green card had expired, presenting him even more challenges.

“I haven’t heard of the Internal Revenue Service being allowed into the state prison to audit someone or take custody of them when they’re going to be released,” Chan said. “California can say no. Courts have held that California has no obligation to assist immigration and customs enforcement with these transfers.”