Civilians on task-forces and some elected officials are pushing for changes in police conduct, because it’s clear the police won’t do it 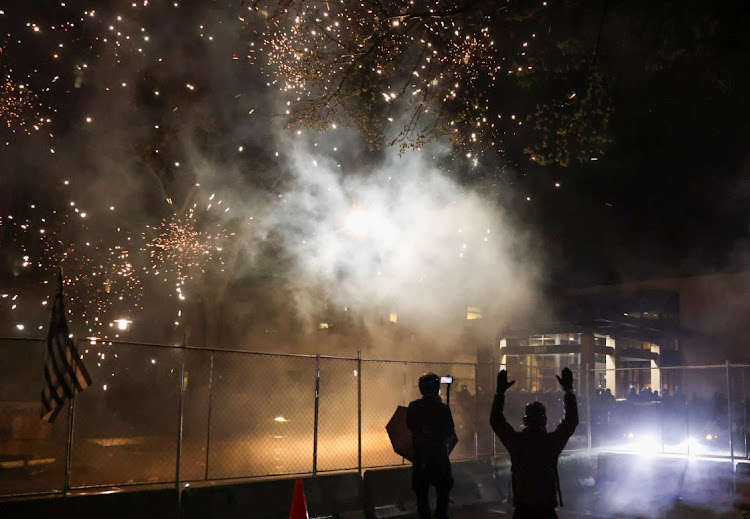 Protesters outside Brooklyn Center police department a day after Daunte Wright was shot and killed by a police officer, in Brooklyn Center, Minnesota, US, April 12 2021. Picture: REUTERSLEAH MILLIS

Lubbock — Last summer, millions of Americans took to the streets to protest racism, police violence and the killing of George Floyd.

In the year since, many transformed their energy and anger to action. Across the country, civilians on task-forces and elected officials in state legislatures are pushing for changes that experts say address the root causes of police misconduct targeting minority communities. Reforms at state and local levels in the past year include the creation of oversight boards that are not beholden to police departments or unions.

“You cannot just ask the police to do their reforms themselves — it won’t get done,” said Robert Davis, a pastor who co-ordinates a civilian-led task force in Denver that is preparing a report on proposed changes for police. “We have to empower the community to be responsible for public safety.”

Community efforts have existed for generations, and modernising the roughly 18,000 individual police departments in the US is a messy, fragmented and difficult task. But policing experts say that efforts now go beyond addressing tactics — such as banning choke holds.

“There is a deeper questioning around not just resources and tactics but in asking ‘What are we trying to accomplish?’” said Tracie Keesee, who spent 25 years as a police officer in Denver before co-founding the Center for Policing Equity. “People are genuinely trying to do something new.”

Keesee sees civilians making progress in places such as Ithaca, New York, where she worked with the mayor’s office that recommended the replacement of the police department with a “community solutions” public safety agency — an idea rejected by the local police union. She also cited a move in Austin, Texas, to cut the police budget by a third and use some of that money to address social issues such as homelessness.

Austin is a left-leaning island in a conservative state where the Republican governor Greg Abbott is pushing legislation that would withhold some state tax revenue for cities that cut police budgets. That points to hurdles ahead for reformers.

Jeffrey Fagan, a Columbia University criminal justice scholar, said the federal government has an important role in policing reform. But he is increasingly convinced that state-level efforts hold more promise at getting at the roots of police misconduct.

“That is the future of police reform,” he said. He called reforms, including a police oversight committee that were pushed through the Massachusetts state legislature and signed into law by another Republican governor, Charlie Baker, in December, “remarkable”.

That they came from elected state officials “has a very powerful legitimising effect”, Fagan said.

Jonathan Blanks, a visiting fellow at the Foundation for Research on Equal Opportunity, who focuses on policing, said people often look to Washington for help with big, systemic problems. But officials in DC do not have much authority over local police departments, he said.

Days before former Minneapolis police officer Derek Chauvin went on trial in March for murder in Floyd’s death, the George Floyd Justice in Policing Act was passed with little Republican support in the Democrat-controlled US House of Representatives.

Among its provisions, the bill proposes restricting certain funds to local governments that let law enforcement officers use choke holds, requiring law enforcement agencies to provide data on the use of deadly force, and changing “qualified immunity” to further open the door for lawsuits against police over the use of excessive force.

The bill’s prospects were uncertain in the Senate, where the Democrats’ majority is slim and some moderate Democrats have joined Republicans in expressing concern that the proposal would divert funds that police need and make communities less safe.

Murphy Robinson, the director of public safety in Denver, linked the desire of communities to take part in rethinking policing to last summer’s protests. He said he welcomed civilian input, but cautioned that task-forces, such as the one in his own city, which was set up by faith leaders and community organisers, need to be fully representative and have more involvement from law enforcement.

Earlier this year, Robinson halted the public safety department’s participation in Denver’s task-force because he said his team’s role is limited to answering questions, which the task-force co-ordinator Davis denied.

“If you don’t have the people that do this work everyday at the table, we’re going to miss an opportunity to actually work together to get real change, real criminal justice transformation,” Robinson said.

Xochitl Gaytan, a community activist and member of the Denver task-force, said it is underrepresented communities that are disproportionately on the receiving end of police abuses who need to be heard.

She said Floyd’s death and the disproportionate impact the pandemic has had on minority communities has helped inspire Americans from many communities to confront what she said is systemic racism and classism in police and other institutions.

The police reforms that may eventually be adopted, she added, “may not be as grand as one would hope, but it’s going to open the opportunity for us to continue challenging the system”.

Experts who track police prosecutions say it is highly unusual for a city’s senior police official to testify that one of his former subordinates ...
World
1 year ago