Powell says Fed will be ‘patient’ in withdrawing support 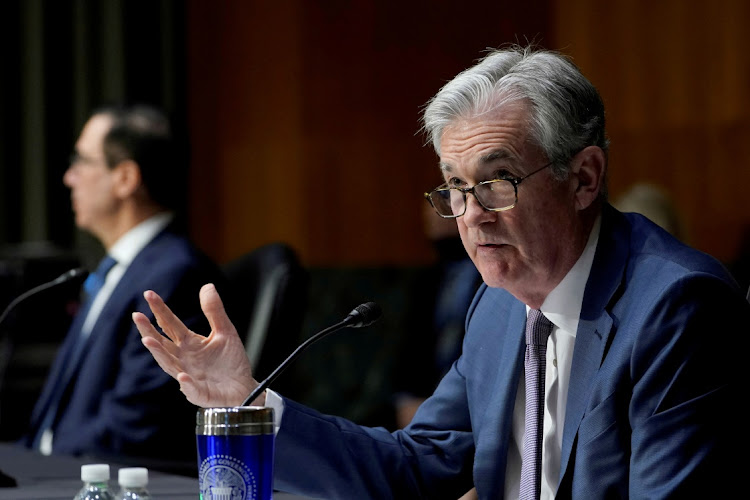 Washington  —  US Federal Reserve chair Jerome Powell on Thursday repeated his pledge to keep credit loose and flowing until Americans are back to work and that some inflationary pressures are likely in the coming months.

Powell said he expected some inflationary pressures ahead but that it probably would not be enough to spur the central bank to hike interest rates.

“We expect that as the economy reopens and hopefully picks up, we will see inflation move up through base effects,” Powell said during a Wall Street Journal conference. “That could create some upward pressure on prices.”

US markets fell after his comments, with stocks sliding and Treasury yields jumping.

With vaccines rolling out and the government fiscal taps open "there is good reason to think we will make more progress soon" towards the Fed's goals of maximum employment and 2% sustained inflation, Powell said.

But "even if that happens it will take substantial time. We want labour markets consistent with our assessment of maximum employment. That means all of the things," Powell said in reference to hopes for not only a low unemployment rate but also wage and job gains that flow to minorities and others often left out of the first stages of an economic rebound.

"I want to be clear about this," Powell said. Even when conditions do improve, "I expect that we will be patient".

His comments, which are likely to be the last before a press conference on March 17 following the Fed's next policy meeting, set aside concern that a recent move up in US Treasury yields might spell trouble for the Fed as investors push up borrowing costs the central bank wants to keep low.

While Powell said the increase was "notable and caught my attention", he did not consider it a "disorderly" move, or one that pushed long-term rates so high the Fed might have to intervene in markets more forcefully to bring them down, such as by increasing its $120bn in monthly bond purchases.

Some version of this message has been made by half a dozen Fed policymakers recently in the face of a surge in government bond yields that has seen the 10-year US Treasury note yield climb by more than half a percentage point since the start of the year. It now stands at roughly 1.5%, triple what it was last August and roughly where it was before the coronavirus pandemic struck.

The Fed chorus is all in an effort to explain away that move as showing confidence in the country's economic recovery, not evidence of damaging expectations about inflation to come or a full-on bet that the Fed would try to raise rates on its own to keep the economy from overheating.

Instead, policymakers have pledged to keep their short-term policy interest rate near zero for perhaps years to come. They've also promised to hold down long-term borrowing costs, key to consumer and business decisions to buy cars and homes or invest in new buildings, through the central bank's bond purchases.

Some analysts thought Powell might in his remarks on Thursday nod to the Fed's ability to more aggressively intervene and increase its bond buying if long-term yields keep rising.

That he didn't might disappoint some, but served as a reminder that the Fed will stick to a new framework that puts a premium on job creation.

It is a potential moment of inflection for the US economy. Fifty-million people have been at least partially vaccinated against the coronavirus, the rollout is accelerating, and economic growth is expected to follow. Families are sitting on about $1.5-trillion in extra savings they may be eager to spend once it is safe.

Add to that a $1.9-trillion federal spending bill nearing approval in Congress, and economic forecasters expect potentially record-setting US growth in 2021.

Gold loses ground amid pressure from US yields

Microsoft, Apple and Amazon drop, weighing more than any other stocks on the S&P 500
Markets
1 month ago

Legislation that provides $1,400 direct payments to taxpayers, among other Covid support, narrowly passes in House and heads to the Senate
World
1 month ago
Next Article