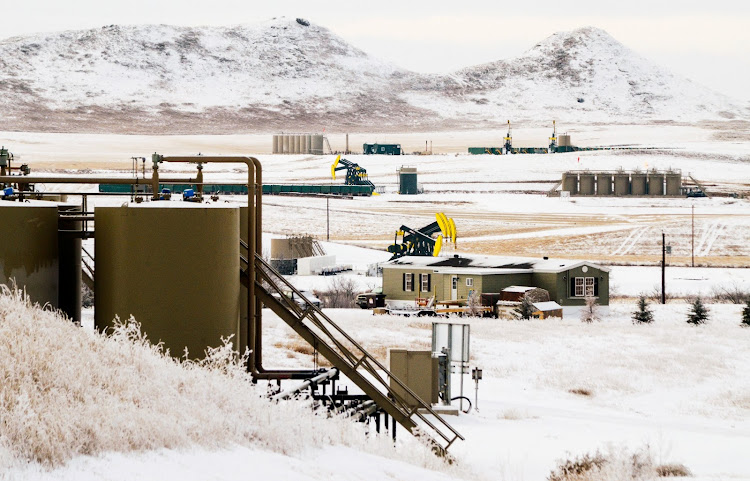 Pumpjacks and other infrastructure for producing oil dot fields outside of Watford City, North Dakota in the US. Picture: REUTERS/ANDREW CULLEN

That is the bold assessment from the International Energy Agency (IEA), the organisation that has spent four decades working to secure oil supplies for industrialised nations. In its new road map for achieving net-zero global carbon emissions by 2050, the IEA laid out in stark terms what the planet must do to avoid harmful climate change — and just how far that is from our current reality.

Annual gains in energy efficiency must be three times faster over the next decade. Installations of photovoltaic panels would have to rival the size of the world’s biggest solar park — every single day until 2030. Within three decades, the role of fossil fuels should reverse entirely — from 80% of global energy needs today to barely a fifth by mid-century.

“Our road map shows the priority actions that are needed today to ensure the opportunity of net-zero emissions by 2050 — narrow but still achievable — is not lost,” IEA executive director Fatih Birol said on Tuesday. It is “perhaps the greatest challenge humankind has faced.”

To achieve this objective, spending on new oil and gas projects needs to end immediately, though investment in existing reservoirs could continue, the IEA said in the report, which was prepared for the COP26 climate talks scheduled for November. No new coal-fired power stations should be built unless they include technology to capture their emissions, it said.

Sales of new cars with internal combustion engines would have to end by 2035, with the role of electric vehicles expanding from 5% of the global fleet today to 60% by 2030, the IEA said. Oil demand should plunge to 24-million barrels a day in 2050 and never again exceed the level of almost 100-million barrels seen two years ago.

Reducing emissions to net zero — the point at which greenhouse gases are removed from the atmosphere as quickly as they are added — is considered vital to limit the increase in average global temperatures to no more than 1.5ºC. That is seen as the critical threshold if the world is to avoid disastrous climate change.

But it is a path that few are following. Government pledges to cut carbon emissions are insufficient to hit “net zero” in the next three decades and would result in an increase of 2.1ºC by the end of the century, the IEA said.

“This gap between rhetoric and action needs to close if we are to have a fighting chance of reaching net zero by 2050,” the agency said. Only an “unprecedented transformation” of the world’s energy system can achieve the 1.5ºC target.

The IEA’s road map appears to be at odds with climate plans laid out by Europe’s top three oil companies — BP, Royal Dutch Shell and Total. They all have targets for net-zero emissions by 2050, but intend to keep on seeking out and developing new oil and gas fields for many years to come.

“No new oil and natural gas fields are needed in our pathway,” the IEA said. If the world were to follow that trajectory, oil prices would dwindle to just $25 a barrel by mid-century, from almost $70 now.

Oil and natural gas output would become concentrated in a small number of low-cost producers, largely in the Opec and the politically volatile Middle East, the IEA said. Yet falling prices would mean the fiscal budgets of these producer nations would still come under additional strain and consumers would remain exposed to risks of supply disruption despite the transition away from fossil fuels, the agency said.

Initiatives that will aid the company in reducing its carbon emissions don’t go far enough, critics say
Companies
4 months ago

The reduction in carbon emissions in the US are due to the displacement of coal; even removing coal entirely will not see it reach net-zero by 2050
Opinion
5 months ago
Next Article