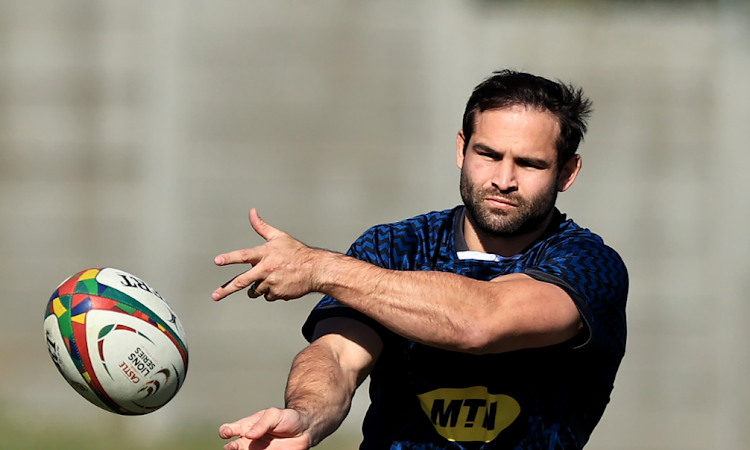 The British & Irish Lions might decide to up the tempo and throw the ball around in Saturday’s deciding Test, new Springbok scrumhalf Cobus Reinach predicted.

Franco Mostert moves from lock to the side of the scrum to replace Du Toit, and Lood de Jager takes over from Mostert in the second row.

Reinach, who has not featured in the series yet, replaces De Klerk, who has been ruled out with a leg muscle strain. Herschel Jantjies remains on the bench despite coming on for De Klerk in the first two games.

SA have deviated from their preferred 6-2 split on the bench between forwards and backs, and this time will have three backline players among the replacements, including flyhalf Morné Steyn, who kicked the Boks to victory in the 2009 series against the Lions.

“We are ready for anything; this Lions team can go through you and over you,” Reinach said. “They have a team that can do anything, so we have to be able to adapt.

“I think the Lions will want to start with a little more pace and throw the ball around. It is up to us to put our game on them and take their game away from them.”

Nienaber said consistency has been applied in naming the Bok team. “This is a huge Test for us with the series on the line, so it was important for us to maintain consistency in selection following last week’s performance,” he said.

“Cobus is an experienced player with a calm head who can handle pressure and we believe he will be able to dictate play well alongside Handré Pollard.

“I am delighted for Morné, who is a world-class player. His work ethic and positive attitude, on and off the field since joining the team at a training camp in Bloemfontein, has been impressive.

“He can also perform under extreme pressure, as he has shown for the Springboks and the Bulls, and that skill will be invaluable in such a vital Test.

“We are preparing for a physical encounter and we know that every small battle will count if we want to win the series.

“This match is as important to us as it is for the Lions, so we know it is going to be tight, and we will have to capitalise on every opportunity we have to score points, and be effective in every area of our game.”

In the backs, Josh Adams, Bundee Aki and Liam Williams come in while Ali Price is restored at scrumhalf, replacing Conor Murray, for the third encounter.

“The match-day 23 have an incredibly special opportunity in front of them — to seal a Lions Series victory in SA,” he said. “It doesn’t get much bigger than this and we’re excited by the challenge that faces us on Saturday.”