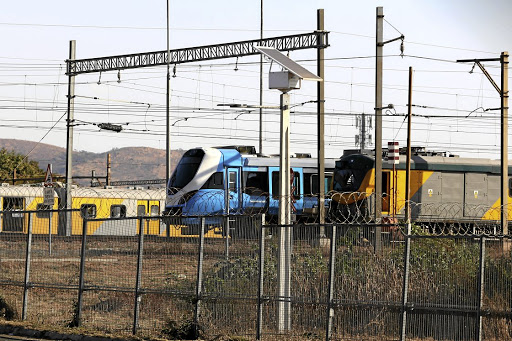 Metrorail said it was the victim of “economic sabotage” on Tuesday after fibreoptic communications lines in Cape Town were cut overnight.

Most of Metrorail’s commuter trains were suspended on Tuesday morning as the cut in communications rendered them too dangerous to operate. Fibreoptic cables are worthless as scrap and Metrorail spokesperson Nana Zenani said it appeared someone had cut the cables to see if they contained copper. No cable was stolen.

Zenani said the fibreoptic lines are run along the overhead electrical wires.

“We normally run more than one line with multiple rings above ground and underground to divert telecoms in the event that one is damaged. In this case, all of those lines have been cut,” she said.

Metrorail has had major security shortcomings along its railway corridors across the country. 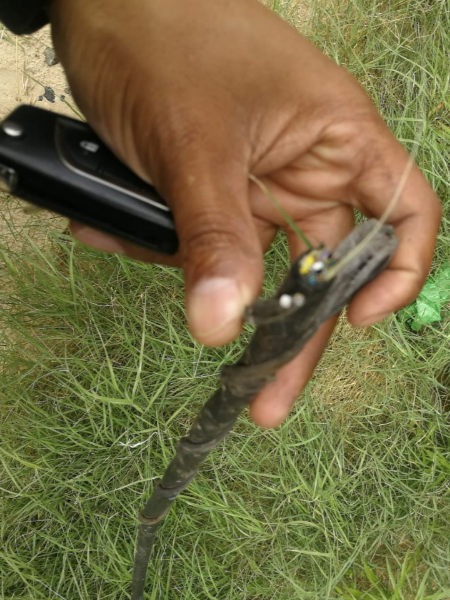 One of the fibreoptic communication cables that was cut, halting train services in Cape Town on November 30. Picture: PRASA.

Cape Town's central line, which passes through densely populated townships where a large proportion of the city’s workers live, has been completely stripped of overhead electric cables.

Thieves have also targeted the steel pylon support structures along which the cables used to run, and steel infrastructure including tracks.

Tuesday's discovery of the body of an unidentified person who was electrocuted while allegedly trying to steal live 11,000-volt cables on Tuesday underlined Metrorail’s security problem.

The body was found on the railway line between Athlone and Crawford stations.

“It takes 80 milliamperes to stop a human heart. In this case, the deceased was hit with 1,500 milliamperes,” said Zenani.

Metrorail cancelled services in the same area on November 22 due to cable theft, and said the person who died was trying to steal the new cables, which had been fixed and switched on in anticipation of the resumption of services.

After a spate of arson that decimated Metrorail’s train stock between 2016 and 2019 and several attacks on train drivers and commuters, the organisation’s management said a security wall would be built along the central line, which runs through Philippi, Mitchells Plain and Khayelitsha.

However, work on the wall is yet to start, and after train services ceased on the line in 2019, land invaders built informal settlements over the tracks.

Prasa spokesperson Andiswa Makanda said design planning for the “very hi-tech wall” has been concluded and the structure is scheduled to be built in the 2022/2023 financial year.

In the meantime, said Makanda, “there is a security plan that includes the increased deployment of security guards to man the railway lines”.

Zenani said the cutting of the fibreoptic lines meant trains were unable to communicate with one another and the control room. The disruptions and constant theft and vandalism on the Metrorail lines come as the organisation is starting to roll out its new trains.

“The vandalism seems deliberate and aimed at disrupting the already limited train services.”

“This, unfortunately, has not deterred prospective criminals from targeting not only our infrastructure but other entities such as Transnet and City of Cape Town property.”

Offenders are normally apprehended red-handed, en route to or at scrap metal dealers.

The city established its own law-enforcement units to help the national government cope with security shortcomings on trains and along the railway line.

The city’s metal theft unit assistant chief, Marilyn Holding, said there had been a “severe increase in infrastructure-related thefts” in Cape Town.

Holding said the theft of Prasa and Transnet infrastructure was “not purely opportunistic” and though some thieves were stealing to subsist, “greed” was also a factor.

She said a drastic increase in the international market price for metals fuelled the attacks.

“It is seldom that identifiable items are recovered at scrap metal dealers, as the original appearance of items is often altered to hide its identity. The value of certain metals also increases in value.”

For example, Holding said, copper cable in its original form and still covered in plastic has a scrap purchase price of about R30/kg, while “shiny copper” with no covering fetches R120. Burnt or mixed copper sells for R100.

She said the vastness of the terrain made it difficult to police the railway lines but she accused Prasa and Transnet of not doing enough.

“Entities need to work on effective branding of their assets. They need to create uniquely manufactured items. The law puts the burden of proof of ownership on the entity and not on the person in whose possession the items are found,” she said.

She pointed out that the Second Hand Goods Act had no penalty clause for possession of suspected stolen copper cables.

“Policies should be drafted to regulate the manner in which legally scrapped metals are disposed of after they have been sold off to registered scrap dealers. Sometimes dealers show documentation from years ago to prove ownership of metals found on their property.”

She said specially trained investigators, prosecutors and magistrates should deal with infrastructure-related cases, and the staff members of the entities who are going to be providing the specialist statements and testify in court need to undergo stringent workshops to ensure successful convictions.

LETTER: Sabotage and beyond

LETTER: Sabotage and beyond