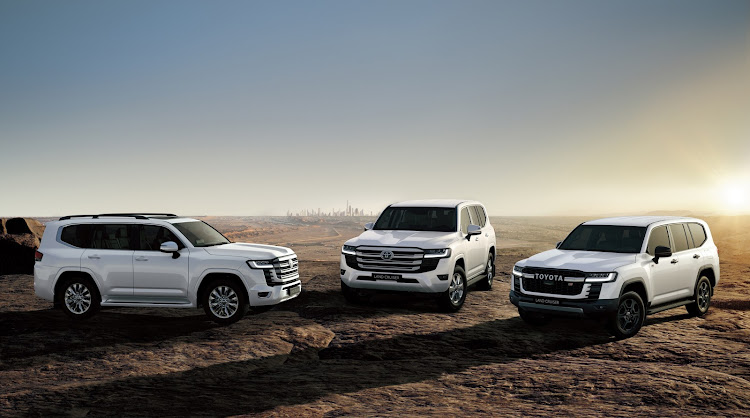 Toyota has revealed the first official pictures and details of its much-anticipated Land Cruiser 300. Succeeding the 200 series, the new flagship SUV adopts a bolder design and more powerful new petrol and diesel engines.

The big Toyota makes a strong visual impact with a prominent new front facade with a rectangular theme and stylised light guides, alongside large horizontal slats with either black or chrome accents depending on model. U-shaped front radiator openings create a muscular, solid appearance that enhances what Toyota calls the Land Cruiser’s “Master of Africa” status.

The iconic off-roader is moved along by two all-new V6 engine options, a petrol and a diesel. The smooth and powerful 3.5l twin-turbo petrol is inherited from the Lexus LS 500 and sends 305kW and 650Nm to the Land Cruiser’s all-wheel drive system.

Both versions are paired with a 10-speed automatic transmission that includes a low-range transfer case, and Toyota says that improved refinement goes hand in hand with the SUV’s added performance.

As before, the Land Cruiser employs a rugged body-on-frame design to maximise its off-road ability, but adopts a Toyota New Global Architecture (TNGA) platform. Being substantially lighter and more torsionally rigid than its predecessor, and also having a lower centre of gravity, the TNGA chassis improves off-road capability, on-road performance and driving comfort. 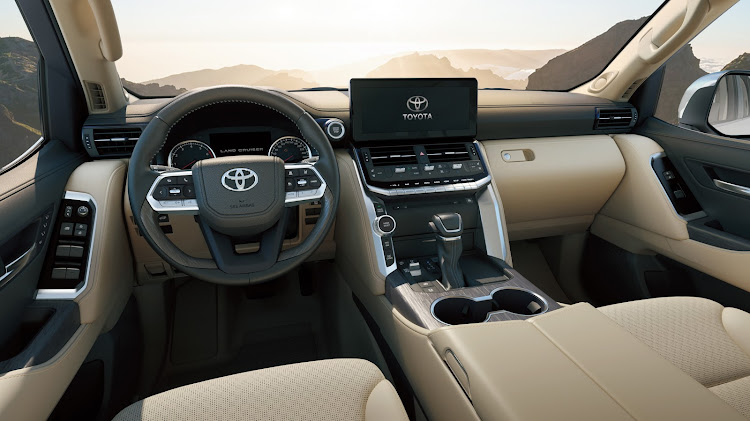 The new Land Cruiser is more luxurious and high tech, but still retains many physical buttons instead of going fully digital. Picture: SUPPLIED

Inside, the big SUV has become more luxurious and lays on the latest amenities and infotainment, but it hasn’t gone full digital as per the modern trend, and still features many physical buttons. As before it’s a seven-seater with three rows of seats.

The vehicle is unchanged in size and also retains its predecessor’s generous departure and approach angles for off-road work. The new Land Cruiser 300 is the first Toyota to adopt a Multi-Terrain Monitor, which gives the driver a real-time view of the road surface beneath and immediately surrounding the vehicle and the position of the wheels. A Multi-Terrain Select system automatically judges the driving surface and adopts an appropriate driving mode.

Safety upgrades include the ability of the Pre-Collision System to detect pedestrians and cyclists in the vehicle’s path.

Three specification grades will be offered when the new Land Cruiser goes on sale in SA around August: the utility-focused GX-R, the urban-based ZX (replacing the VX-R) and the off-road-biased GR Sport. Full details of specification and pricing will be announced at the time.

With more power and updated tech, the seven-seater SUV is a top choice for family expeditions
Life
6 months ago