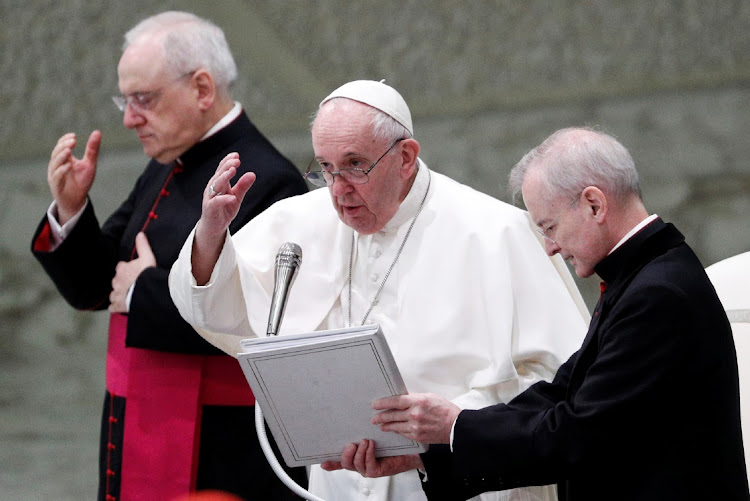 Rome  — Pope Francis called for civil unions for gay couples, in what would be a significant shift from the Catholic Church’s long-held opposition to same-sex marriages.

“They’re children of God and have a right to a family. Nobody should be thrown out, or be made miserable because of it,” Francis says in a new documentary. “What we have to create is a civil union law. That way they are legally covered. I stood up for that.”

This is a departure from the position of his predecessors and the comments will revive the debate within the church on sexual morals, and draw criticism from conservatives who say the pope has drifted too far from traditional values.

The pontiff appeared to have discussed same-sex civil unions during an interview with filmmaker Evgeny Afineevsky for his documentary, Francesco, that premiered in Rome on October 21. He speaks Spanish, and there are English subtitles.

The orthodox sector of the Catholic Church has resisted the idea that same-sex couples should have legal protection. That was the case in Italy where civil unions are described as something different from marriage, which remains the prerogative of a male-female relationship.

However, Catholic reformers will welcome his comments.

Francis has made inclusiveness the linchpin of his papacy, as he battles declining numbers of Catholics and pressure to have the church attune to modern society while not losing its moral compass.

He has demonstrated a willingness to discuss topics such as communion for divorced people, absolution for women who have had abortions, and the ordination of women and married priests. In doing so, he’s amplified a growing schism within the church.

The latest endorsement does come as a surprise and the manner in which it was communicated was unusual.

Such a change in policy would come in the form of a papal document known as an encyclical. The Vatican has yet to comment. The documentary chronicles Pope Francis’s approach to pressing social issues.

Until now, the pontiff has defended traditional marriage as a union which allows a couple to procreate. So if confirmed, it’s a major change with a series of knock-on effects.

“This is the first time that this pope or his predecessors have called for civil legal rights for same-sex couples,” said Austen Ivereigh, papal biographer.

“Previous popes very much left this issue to national bishops conferences to decide,” he added, “so the Church can now be clear on where the Pope stands on an issue that has been discussed by many bishops in many countries for many years.”

The Vatican, though an independent state, is surrounded by Rome and has cast a long shadow on Italy’s politics and of those countries with large Catholic populations.

Italy lags behind most other European countries on homosexual and gender rights, and only legalised same-sex unions in 2016. While same-sex couples have access to most legal rights enjoyed by married couples, there’s no legal protection for children born to same-sex couples.

Former interior minister Matteo Salvini, leader of rightist League party, has been a vocal opponent of homosexual rights, denying the children of same-sex unions to have the name of both parents on national identity cards.

The pope's predecessor, Benedict XVI, was firmly against plans by then-premier Romano Prodi to recognise civil unions, including those of same-sex couples, in 2007.

Vatican says it may have been swindled in its investments

THE GUARDIAN: Defeating the politics of hate