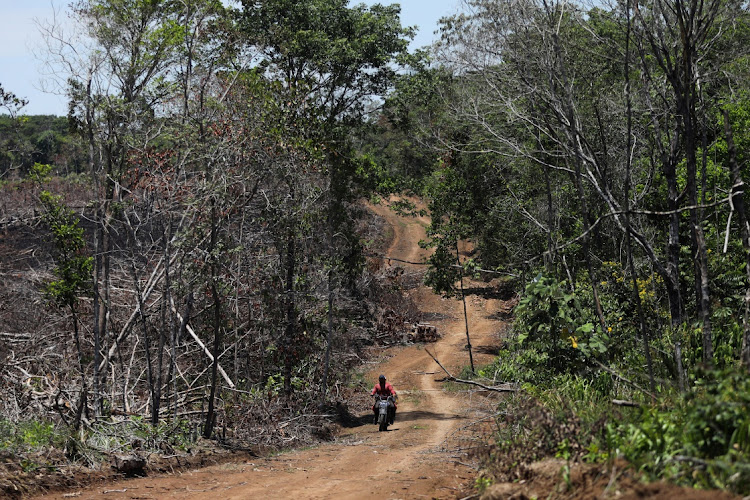 A man rides a motorcycle on an illegal road made during the deforestation of the Yari plains, in Caqueta, Colombia, on March 2 2021. Picture: REUTERS/LUISA GONZALEZ

San Vicente Del Caguan — The dirt tracks winding through southern Colombia's tangled jungle often mark the beginning of the end for besieged patches of rainforest in this part of the Amazon.

Across San Vicente del Caguan, one of the country's most deforested regions, illegal and informal roads fan out in an ever-expanding network, bringing visitors, commercial interests and farmers and ranchers who clear and burn the land.

The result is the steady decay of Colombia’s Amazon. The destruction, which is striking on the ground, is significant enough to be visible from the sky.

Patches of deforestation appear at the furthest extent of the roads, according to the map, which underlines the effect of unplanned roadbuilding by combining satellite imagery and local cartography.

The lines even cut into protected national parks such as Sierra de La Macarena, home to tourist attraction Caño Cristales, which is known as the river of the gods, or the river of seven colours.

“Almost all of the roads in the Amazon region were informally opened by the communities, farm owners, actors at the edge of the law ... without going through an agency planning process,” said Adriana Rojas at Foundation Gaia Amazonas, a Colombian environmental group.

Each year up to 830km of unplanned roadway penetrate Colombia’s Amazon, according to the Foundation for Conservation and Sustainable Development (FCDS), which has been tracking road development in these areas since 2017.

In 2019, more than half of all forest clearings analysed by the foundation were within 1km of a road.

The unplanned thoroughfares start as narrow dirt tracks, local official Hector Molina explained during a drive through the region in March.

Near a rolling pasture, Molina parked his vehicle in the shade of trees left standing and stepped out onto the dirt road. “This one they made three months ago,” Molina said, referring to local inhabitants.

Eventually, trees are removed to widen them enough for larger vehicles to navigate. And the expansion has shown no sign of slowing, further threatening a rainforest that absorbs vast amounts of carbon dioxide and is considered vital to curbing climate change.

“Once they're on motorbikes, the deforestation has already started,” Molina said.

Deforestation spiked in Colombia after the government signed a peace deal to end hostilities with the Revolutionary Armed Forces of Colombia (Farc) guerrilla group in 2016. Where the Farc once prohibited deforestation, the pact opened access to swathes of the country.

Roads built by the Farc are now being used by local communities, as well as other armed groups trafficking drugs or planting coca, the chief ingredient in cocaine.

According to the Foundation for Conservation and Sustainable Development, more than 280km of unplanned roads were opened in key areas during the first 100 days of 2020. It expects more roads were built in 2020 than in any other year, driven by rising land speculation.

“Road construction shot up enormously” in 2020, said foundation director-general Rodrigo Botero. “It's likely that, during the first quarter of 2021, we'll see growth in deforestation due to the expansion of roads.”

Even illegal roads increase land value. Some farmers in Caqueta told Reuters a hectare of pasture with road access can go for about 2.5-million pesos ($695), compared with 1.5-million pesos without.

One farmer, aware of the damage caused by his roadbuilding and ranching in the Amazon, said he had no choice.

“If we cut down trees, we are able to farm our livestock,” he said, declining to give his name for fear of repercussions. “It makes me sad, but I have no choice.”

Colombia is not the only Amazon country struggling with the encroachment of roads.

In Brazil, where deforestation of the Amazon hit a 12-year high in 2020, there are an estimated 3km of illegal byways for every 1km of legal road, according to a November assessment on progress made towards the nonbinding New York Declaration on Forests, which calls for halting all deforestation by 2030.

The planned construction or upgrade of about 12,000km of legal Amazon roads over the next five years across Bolivia, Brazil, Colombia, Peru and Ecuador could lead to the loss of about 2.4-million more hectares of rainforest in the following two decades, as legal road development encourages more informal roads, the report said.

Colombia's environment ministry said it is working with other government departments and using satellite images to find and disable illegal roads.

“We're reaching those roads to disable them, of course, and obstruct illegality concerning tertiary roads,” Environment Minister Carlos Eduardo Correa told Reuters, although he did not give details of how those roads would be closed.

But at least 1,302 of the country's species are considered endangered, or about 2% of the country's registered 58,312 plants and animals, according to the Biodiversity Information System of Colombia (SiB).

Though primary forest loss in Colombia has decreased from earlier levels, it rose 45% in 2020, according to the World Resources Institute.

“Forest loss was relatively low in 2019, so we thought Colombia might have been turning a corner,” Mikaela Weisse, project manager for WRI’s Global Forest Watch platform, told Reuters in an e-mail.

The government did not comment on the forest or tree cover loss reported by WRI, and did not respond to Reuters’ questions regarding Weisse’s remarks.

Towers of billowing smoke mar the bright blue skies above the Yari plains, where Molina negotiates his old red four-by-four over a bumpy dirt road past patches of charred earth and stretches of pasture, broken by isolated stands of forest.

The plains, which straddle areas including San Vicente, mark the convergence of savannah and rainforest. As Molina advances further into the forest, the older road narrows and gradually gives way to a fresher throughway still lined by trees.

Anyone building a new public road must first get an environmental licence but is free to do what they like on their own property, the National Roads Institute said.

Those distinctions can be murky, however, as many people claim more lands in areas with little to no state presence. The country's National Land Agency declined to respond to questions about the legal rights of farmers who took land for themselves.

In recent years the regional environment authority Corpoamazonia says it has tried to dismantle some of these roads. And some locals are helping by denouncing deforestation, the authority's Caqueta director, Mario Baron, told Reuters.

“These same communities ... are denouncing those who are meddling with the forest and building these roads,” Baron said, without giving further details.

Meanwhile, Molina has his own land that he wants to turn into an eco-tourism destination. Authorities have designated the land as a reserve, but he has yet to persuade his neighbours to stop expanding their pastures into the forest.

For him, the expanding roads mean just one thing.

“The forest marches towards its grave,” he said, “and the road follows it to the end.”

Norway has paid $1.2bn into the Amazon Fund so far, but under President Jair Bolsonaro, rainforest destruction has surged
World
3 weeks ago