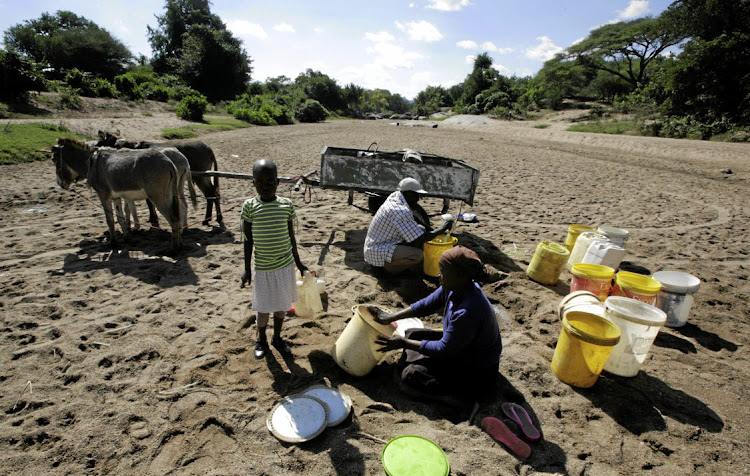 Villagers dig for water in a river bed near Masvingo in southeastern Zimbabwe. Picture: REUTERS

Bulawayo — While most teenagers spend their time studying and planning for life after high school, activist Nkosilathi Nyathi is busy pushing Zimbabwe’s leaders to come up with new ways to tackle his country’s contribution to climate change.

The 17-year-old, who was appointed a youth climate advocate by the UN Children’s Fund (Unicef) in November, believes a climate-smart Zimbabwe means including young people in decisions on conserving natural resources and cutting emissions.

“I live this — my family lives it too. There are people who rely on the environment daily, therefore they need to be informed and supported,” Nyathi said.

His local area has experienced heatwaves and floods, while some farmers have been forced to shift to growing small grains because rainfall has become too erratic to cultivate maize. More intense rains, meanwhile, have carved out deep gullies in the soil, he added.

More than 7.7-million Zimbabweans, half the population, face food shortages after a drought and cyclone in 2019, then patchy rains in 2020, in a crisis linked to climate change and worsened by rampant inflation and a foreign exchange shortage.

Climate experts say deforestation and the use of firewood for fuel are major contributors to Zimbabwe’s planet-heating emissions, which remain low compared to developed nations.

Forestry commission figures show the country loses about 330,000ha of forests annually, and forest and woodland now cover 45% of its land area, down from 53% in 2014.

Zimbabwe has pledged to cut its energy-related emissions by 33% per capita from projected business-as-usual levels by 2030.

Meanwhile, it is experiencing worsening droughts and floods, as well as unusual storms.

For Nyathi, the most urgent task is reaching out to other young Zimbabweans to show them that even small steps to curb climate heating and its impacts can make a difference.

“Young people are the agents of change,” he said. “Some of us will be leaders of tomorrow, so it is a must that we are informed about what is happening around us so that we can plan better, sustainable solutions for the future.”

Nyathi’s path into activism started when he was 10 and learning about the environment in school. He started making videos, documenting soil erosion around his neighbourhood due to flooding, and interviewing the head of a nearby power station about the pollution it was causing.

In 2016, Nyathi won a $1,000 grant from Unicef and the G20-backed Global Infrastructure Hub to build a biogas digester at his primary school. The device — the first of its kind in Victoria Falls, where Nyathi lives — works through anaerobic digestion, a process in which food leftovers and cow dung are digested by micro-organisms.

This produces biogas for the school’s cooking equipment in its kitchens, replacing firewood, Nyathi said. “Students can learn about something they see on the premises. Biogas ... does not pollute the air around us and should be made accessible to everyone because it is safe and decreases the chances of cutting down firewood.”

Between co-heading his school’s green club and giving virtual talks to youth groups around the world, Nyathi is now helping set up a solar-powered water pump at his high school, which already uses solar power to light and heat its dining hall.

“The communities themselves can see [these projects] in action and will be confident that we can use more clean energy.”

In 2019, Nyathi took his message to the UN climate summit in Madrid and in 2020 spoke at a session of the UN Africa regional forum on sustainable development in Victoria Falls.

As Zimbabwe grapples with an economy in crisis after years of hyperinflation, power outages and now the financial hit of the coronavirus pandemic, Nyathi told leaders at the forum that climate change still needs their attention.

“I noticed something that affected the poverty of my community, of my family and friends, just as much as all the economic and social problems and political issues we face in my country — it was the environment,” he said in his speech.

By holding the government accountable, the young activist has made clear that the climate emergency is also a crisis of children’s rights — yet young people should not be seen as passive victims, said Unicef spokesman James Maiden.

“Their concerns and ideas need to be heard, political space for them created and economic opportunities linked to environmental sustainability made the new normal,” he said.

Washington Zhakata, director of climate change management at Zimbabwe’s environment ministry, said the authorities have recognised the importance of boosting awareness about climate change among young people and teachers. This year, Zimbabwe launched a national learning strategy to bring climate into the school curriculum.

Rosewita Katsande, MD of the non-profit Youth Empowerment and Transformation Trust, said Nyathi’s work helped shine a light on other youth activists. “There’s a need to mobilise and tell their story,” she said.

With that goal in mind, Nyathi has teamed up with another young environmentalist, Collette Levy-Brown, to build Zimbabwe’s chapter of the global Fridays For Future youth climate movement. Said Nyathi, “We are making this a tool to bring one voice to our leaders on environmental issues.”

Wet weather and coronavirus restrictions left farmers with surplus stock, but drying their mangoes has opened up a whole new market
World
7 months ago

With the right policies, Zimbabwe could coin it with clean-energy supply chains