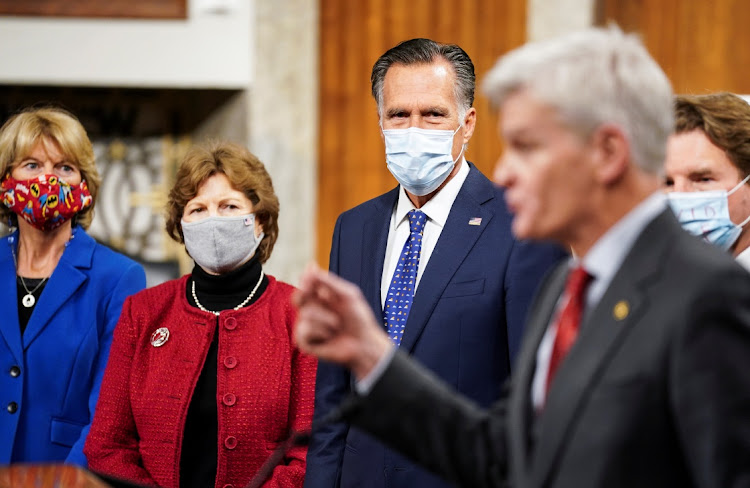 Senators' Lisa Murkowski, Jeane Shaheen and Mitt Romney listen as Bill Cassidy speaks during a news conference of bipartisan members of the Senate and House to announce a Covid-19 relief proposal in Washington, the US, December 1 2020. Picture: REUTERS/KEVIN LAMARQUE

Washington — A bipartisan group of legislators in the House and Senate unveiled a $908bn stimulus proposal on Tuesday in an effort to break a months-long impasse that is now threatening to tip the economy back into contraction.

Neither Republican nor Democratic leaders have signed on to the plan so far, however, leaving it facing the same long odds as a bipartisan House proposal that failed before election day. President-elect Joe Biden has so far backed House speaker Nancy Pelosi, who has pushed a $2.4-trillion bill.

Pelosi and treasury secretary Steven Mnuchin, who have been the two main negotiators on a stimulus package, were  scheduled to talk by telephone on Tuesday.

Mnuchin said he and Pelosi would mainly discuss work on the spending bill needed to keep the government running after December 11, and they may talk “a little bit” about a new stimulus. He said he had not had a chance to review the proposal from the legislators but that he appreciated “that there is some bipartisan support” for a plan.

Republican senator Mitt Romney of Utah, one of the plan’s backers, said only $348bn of the package would come from new spending. The rest would use funds left over in the Paycheck Protection Program (PPP) and Federal Reserve facilities that were part of the $2.2-trillion stimulus plan passed in March.

Under the proposed compromise, small businesses would get a roughly $300bn infusion for a version of the PPP of forgivable loans and other aid, and state and local governments would get about $240bn, including money for schools, according to three people familiar with the proposal.

An additional $180bn would go to an extension of pandemic unemployment benefits, providing an added $300-a-week for four months.

The proposal doesn’t include direct payments to individuals.

Transportation, including airlines, airports, transit and Amtrak, would get $45bn in funding. Vaccines, testing and tracing would get $16bn and health-care providers $35bn.

About $25bn would go to rental assistance, $26bn for nutrition and agriculture, $10bn for the US Postal Service, $10bn for child care, $10bn for broadband and $5bn for opioid treatment.

The package would include a short-term moratorium on liability lawsuits related to Covid-19 — a more sweeping version of which has been pressed by Senate Majority Leader Mitch McConnell and opposed by Democratic leaders — to give states time to enact their own laws if they choose.

The bipartisan proposal was reported earlier by the Washington Post.

Democratic senator Joe Manchin of West Virginia said the group had not received any assurances from Senate leaders that the plan would get a vote. Democratic representative Josh Gottheimer said he planned to brief his leadership in the House and push for a vote.

Speaking on the Senate floor on Tuesday morning, McConnell made no mention of the new bipartisan push for relief, continuing to blame Democrats for seeking a package that is unrealistic and too costly.

South Dakota senator John Thune, a member of McConnell’s leadership team, indicated he was encouraged by the effort at a compromise but said it ultimately would depend on what’s included in any legislation. He said additional aid for state and local governments remains “a big non-starter” for most Republicans.

He suggested some pandemic relief could be included in a bill to keep the government funded that needs to be passed by December 11.

While US stocks have shrugged off risks of a year-end fiscal cliff, with investors encouraged by progress on coronavirus vaccines, economists have increasingly warned that the economy is in danger of a renewed contraction in the first quarter of 2021.

Pandemic-related unemployment benefits are set to expire at year-end, while many businesses are getting squeezed by lockdowns as Covid-19 cases surge. Retail sales gains have weakened, and jobless claims remain stubbornly higher than the peak hit during the 2007-2009 recession.

Federal Reserve chair Jerome Powell, testifying before the Senate banking committee on Tuesday, said that the fiscal stimulus passed previously by Congress “deserves the lion’s share of the credit” in the helping the economy. “It may be that we need more on that front.”

At the same hearing, Mnuchin said that an additional fiscal response was needed. “I think what’s more important is what we can pass on a bipartisan basis,” he said.

In Yellen, Biden will have a battle-tested policymaker who can draw on her nearly two decades at the Fed to help rebuild the economy
World
8 months ago

In a separate report, the commerce department says GDP grew at a 33.1% annualised rate in  third-quarter
World
8 months ago
Next Article