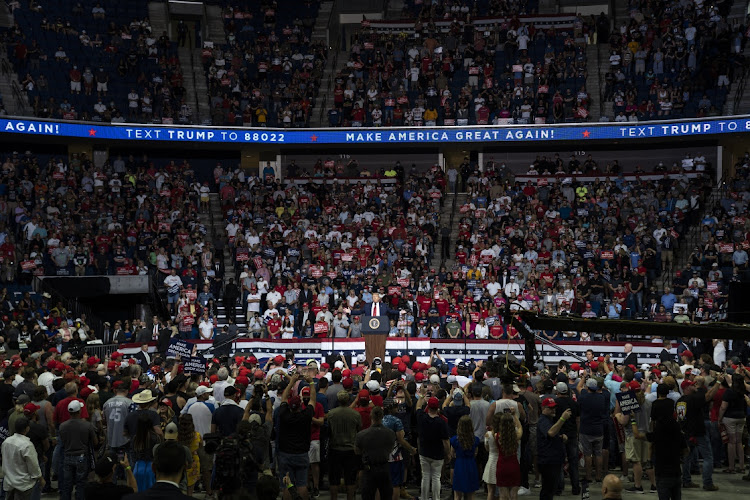 US President Donald Trump speaks during a rally in Tulsa, Oklahoma, the US, June 20 2020. Picture: GO NAKAMURA/BLOOMBERG

Tulsa — US President Donald Trump’s first campaign rally at the weekend since coronavirus will be remembered more for what the president would rather forget, as his attempt to reset his re-election bid drew a disappointing crowd in a solidly Republican state.

The event in Tulsa, Oklahoma, on Saturday attracted far fewer supporters than Trump and his advisers had promised. And it was overshadowed by continuing criticism of his response to the pandemic and to nationwide protests against police brutality.

The firing of the top federal prosecutor in New York emerged as a fresh controversy just hours before the president touched down in the city.

Trump and his campaign manager, Brad Parscale, had boasted that a million people requested tickets online for the Tulsa rally, and Trump flatly promised there would not be an empty seat. He had planned to speak to crowds both outdoors and inside, but scrapped the outdoor remarks after a scant showing. Inside Tulsa’s BOK Center, some upper-level seating was empty.

The crowd inside the BOK Center Saturday night was just under 6,200 people, a spokesperson for the city’s fire department said, or about a third of capacity. Tim Murtaugh, the Trump campaign’s director of communications, said on Twitter that “12,000 people made it past protesters” and through metal detectors into the arena. At least one attendee reported that perimeter gates at the stadium were closed some time before Trump was scheduled to speak.

The campaign blamed protesters, claiming they had blocked Trump supporters from passing through security checkpoints. That could not be verified, and the Tulsa police department said in a tweet that protesters had been “overwhelmingly” peaceful. The poor showing added to indications that Trump’s re-election is far from certain and that his campaign risks derailment.

He has fallen behind his Democratic opponent, former vice-president Joe Biden, in national polls and surveys of key battleground states. In May, Biden’s campaign outraised Trump’s for the first time, while Trump’s campaign spent twice as much money.

Trump declared on Saturday that he would win re-election, despite recent polls, and alluded to nationwide protests against police violence against people of colour.

“I stand before you today to declare that the silent majority is stronger than ever before,” Trump said. “We are the party of Abraham Lincoln, and we are the party of law and order.” On Saturday, the president said nothing about the size of the crowd.

He painted Biden as a befuddled puppet of the Democratic Party’s far left flank.

“Does anybody honestly think he controls these radical maniacs?” Trump said, at one point asking the crowd: “Do you know what he says to his wife, when he’s not confusing her with his sister?”

In the hours before his arrival, Trump courted new controversy as Geoffrey Berman, the chief federal prosecutor in New York, resigned following a remarkable stand-off with attorney-general William Barr, who said the president had fired him. But Trump told reporters as he departed the White House for Tulsa that Barr was responsible for Berman’s removal, saying “I’m not involved.”

The president has struggled to maintain enthusiasm for his campaign as coronavirus ravaged the country and cities nationwide were convulsed by protests following the death of George Floyd last month at the hands of Minneapolis police. Over the course of a week, a damaging new book by Trump’s former national security adviser, John Bolton, and the ousting of Berman on Saturday added to the president’s travails.

Trump’s large, raucous rallies were the lifeblood of his 2016 campaign, and he had begun to increase their frequency late in 2019 as he prepared for re-election. But the coronavirus outbreak ruined his best argument for another term — the strength of the US economy, now in recession — and sidetracked his campaign’s favourite tactic, making rallies impossible since March.

Saturday’s rally marked a return to script for a president who has thrived on the crowds and sharp partisanship of the events. It was also meant to be a declaration of victory over the virus —  the administration has touted Oklahoma as a reopening success story, though cases of the disease spiked in the state ahead of the rally.

When you do testing to that extent you’re going to find more people. So I said to my people, slow the testing down

Local health officials had recommended delaying the event, but the campaign pressed ahead. Some campaign advance staff in Oklahoma tested positive for the virus, news that emerged shortly before Trump departed from the White House.

Masks were distributed to attendees as they entered the arena, but few people actually were seen wearing them.

Trump dedicated portions of his speech to the virus, at one point calling it the “Kung flu”, one of a handful of racially insensitive comments. He warned that conceding to demands by police brutality protesters to abolish law enforcement would leave the wife of a travelling salesman vulnerable to “a very tough hombre”. And he said that a Democratic congresswoman who is a Somali refugee, Ilhan Omar of Minnesota, sought to “make the government of our country just like the country from where she came”.

He also sought to play down the risks of the pandemic. “Testing is a double-edged sword,” he said. “When you do testing to that extent you’re going to find more people. So I said to my people, slow the testing down.”

A White House official, who asked not to be identified, later said the president was joking when he spoke about slowing down testing.

Peter Navarro, the White House trade adviser, said Sunday on CNN that the president was being “tongue in cheek” in the comment about testing, describing it as “a lighthearted moment,” while acting homeland security secretary Chad Wolf said the comment reflected “frustration” about how administration efforts are being portrayed.

“We’ve tested over 25-million Americans. We’ve tested more than any other country in this world. Instead, the press and others, all they want to focus on is an increasing case count. And we know that that’s going to occur when you test individuals more and more and more,” Wolf said on CBS.

His speech, which ran for one hour and 44 minutes, saw him touch on recent controversies, including speculation about his health after his unsteady walk down a ramp at West Point’s commencement ceremony last weekend, and online jokes about why he has appeared to struggle to drink glasses of water without using both hands.

On Saturday, after he was brought a glass of water at the rally lectern, Trump flamboyantly drank it with one hand and then flung it aside. The crowd cheered.

Outside the arena, tensions escalated between protesters and Trump supporters ahead of the rally. Protesters clustered near the entrance to the event, where Oklahoma National Guard troops stood in a line.

Some of the demonstrators chanted “hands up don’t shoot”, a phrase common at nationwide protests against police brutality over the past month. Trump supporters entering the rally chanted “go Trump”.

Trump’s campaign boasted after the rally that despite the poor in-person attendance, more than 4-million people had watched the event online. “These numbers represent unmatched enthusiasm behind the President’s re-election and a huge audience that Joe Biden can only dream of,” campaign communications director Tim Murtaugh said.

But some Biden campaign officials gloated over the scene in the arena. “The ol’ Trump 5D chess at work,” digital director Rob Flaherty tweeted in response to a picture of empty seats above the stage as vice-president Mike Pence spoke.

On his way from the arena back to Air Force One — the aeroplane’s successor factored into the speech, as Trump recalled haggling with an unnamed Boeing executive he called a “dumb son of a bitch” — Trump issued another defiant tweet.

“THE SILENT MAJORITY IS STRONGER THAN EVER BEFORE!” he wrote.

The civil uprising over racism and inequality in the US needs to continue, as Tulsa commemorates the 1921 massacre of black Americans
Opinion
10 months ago

The court ended his bid to rescind the the Deferred Action for Childhood Arrivals, with thousands of immigrants now protected from deportation
World
10 months ago