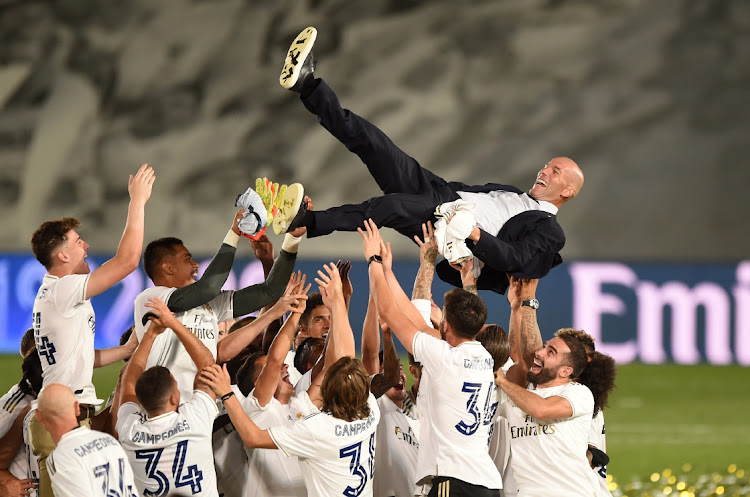 Real Madrid head coach Zinedine Zidane is thrown up in the air by his players after Madrid secure the La Liga title in Madrid, Spain, in July 2020. Picture: DENIS DOYLE/GETTY IMAGES

Madrid — Real Madrid coach Zinedine Zidane says his team used the criticism thrown at them in recent weeks to their advantage in an emphatic 2-0 La Liga win over city rivals Atletico Madrid on Saturday.

Less than two weeks ago, Real had been smarting from shock defeats by Alaves and Shakhtar Donetsk and faced a triple whammy of tough fixtures against Sevilla, Borussia Moenchengladbach and Atletico, with Zidane’s future on the line.

But they won all three matches, returning to the form they showed in the latter stage of last season when they stormed to the title. They are now in third place, three points behind league-leaders Atletico, albeit having played a game more.

“We have been hurt by some of the things that have been said but they have made us stronger,” Zidane said after his side beat their neighbours with a Casemiro header and an own goal from Jan Oblak.

“Criticism is part of football and you have to learn how to cope with it. But the most important thing is that we believe in what we are doing. And today we proved that Real Madrid know how to play.”

The Frenchman was in euphoric mood and praised his players, with a special mention of midfield duo Toni Kroos and Luka Modric who he said were in the same form as when they led Madrid to three consecutive Champions League titles. But he emphasised that Real still had a lot of work to do to maintain consistency.

“I’m happy with everything we did in the game. We pressed them all over the pitch and didn’t let Atletico into the game. It’s been a great week, I’m so glad for the players because they believe in themselves,” he said.

“We built on what we had done in the last two games and competed very well for the majority of the game. But there’s nothing to celebrate because we haven’t won anything yet.”

Nine points ahead of Real, they are taking on a new look as an attacking side
Sport
4 months ago

Bucs captain would not mind lifting the MTN8 trophy together with his predecessor, but they must first beat Celtic to do that
Sport
4 months ago
Next Article