Left-arm spinner picks up five wickets in West Indies’ second innings, but it was his hat-trick that will live long in memory 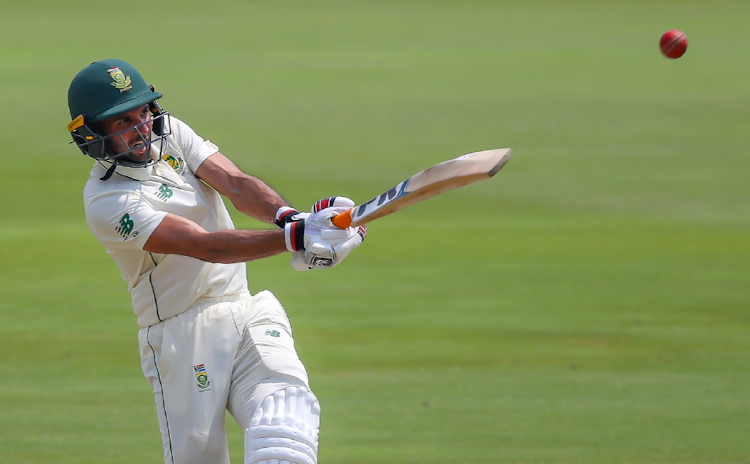 Keshav Maharaj was too excited to come up with a celebration after becoming the first South African to claim a Test hat-trick in 61 years as his side completed a 2-0 series sweep against West Indies with a 158-run victory in St Lucia on Monday.

The left-arm spinner picked up five wickets in West Indies’ second innings, but it was his hat-trick that will live long in the memory, especially as it came when the hosts were beginning to believe they could reach their 324-run victory target.

They had recovered to 107/3 after a poor start when Maharaj (5/36) claimed the scalp of the dangerous Kieran Powell (51), who tried to launch him to the midwicket boundary but picked out lone fielder Anrich Nortjé.

All-rounder Jason Holder was caught by short-leg Keegan Petersen first ball, and Wiaan Mulder took an excellent diving catch low to his right at leg-slip off Joshua Da Silva to complete the hat-trick.

“Powell was looking to come at me and I just thought about putting the ball in the right area and it found Anrich on the boundary,” Maharaj told reporters. “The second one to Jason, I was trying to bowl a straight delivery and luckily it got an inside edge.

“The hat-trick ball I had so many things going through my head as to where to put the ball. In the end I just bowled it normally and Joshua followed it down leg and full credit to Wiaan for a great catch.

“I didn’t know what to do [to celebrate], I thought about doing a slide but ended up stopping dead in my tracks. There was too much excitement and adrenalin in me.”

It was only the second Test hat-trick for SA after seamer Geoff Griffin managed the feat against England at Lord’s in 1960.

The Proteas completed a first away Test series win in four years, which comes as they start a new era under recently appointed captain Dean Elgar.

“There are a lot of positives to take out of the match, but there are also obviously a lot of things we need to work on because there is always room for improvement,” added Maharaj. “But there is a good buzz in the change room and a sense of pride.”

At the same time, West Indies captain Kraigg Brathwaite on Tuesday called on himself and his fellow batsmen to show more fight in their next Test series.

West Indies failed to score more than 165 runs in any of their four innings across two Tests.

“Our plan was to bat better and build partnerships, have consistent partnerships in between, but we didn’t have any. We didn’t do our job as batsmen and we let the team down,” Brathwaite said.

“You cannot win them all but you still want to show fight and determination as batters, which we didn’t.”

Roston Chase with 62 in the first Test and Kieran Powell with 51 in the second were the only Windies players to score half centuries.

West Indies host Pakistan in two Tests in Jamaica in August. In between, they have limited-overs series against SA and Australia.

“We’ve got to come back [against Pakistan], although it will be a tough one,” Brathwaite told a news conference. “ ... It is still a learning process with a lot of young guys in the team. The main thing is batting. We were magnificent in the field, in taking catches and our bowling unit.

“We’ve got time now to buckle down and work on being more consistent.”