The alt-right is prolific on the darker platforms of social media. It’s at a remove from the mainstream, but the hate it spews can translate into real-world violence. And someone is making money off it 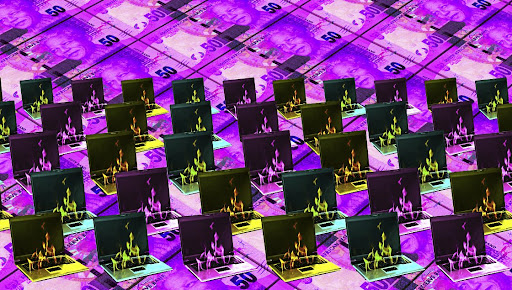 You’ll have been inundated with all the hot takes and think pieces about the Taliban’s overnight takeover of Afghanistan’s capital Kabul, and all the trite comparisons with Saigon, ends of empire and so on. But you might not have picked up that our trusty grifters over on the alt-white end of the spectrum have started to identify approvingly with the Taliban.

In a way, this is perversely enlightened of them, as Christian purity and Islamophobia are a big part of their brand. But in another, more real way, it’s a warning sign that extremists are ultimately in it for the money, and will cleave to anything that advances that quest.

While you’ll find plenty of outrageous stuff on the more mainstream social media platforms, it’s really on the fringe ones where your common-or-garden bigot flowers. And those who try to follow the xenophobia, misogyny, hate speech and racism they spout — either to serve as an early warning system or to gather evidence — find it difficult to penetrate these dark platforms.

I gave up monitoring most of SA’s ersatz alt-rightists a while ago, as they left Twitter and scuttled off to the darker corners of the web, where they didn’t have to hide their hatred. I guess it makes more financial sense to build a niche of crazies — you don’t have to pretend to a rationality you don’t possess to avoid being deplatformed. In some cases, I’ve outsourced the monitoring to other people.

There’s a person who has made it their mission to monitor the Telegram channel of one of our faux-Fox loudmouths. Their Twitter account, called Worm Jawfare, recently exposed these priceless posts for our edification.

There was also one from someone eschewing the "subtlety" of pointed comparisons, who came straight out with: "Yeah I’d take the Taliban over Jews any day of the week."

You’ll notice the usual troping of the white fantastic. Anti-immigration, discomfort with women as autonomous beings, betrayal by government, and homophobia.

"No Taliban ever ran all the banks", I’m assuming, is intended to be read as anti-Semitic, rather than a somewhat more rational dislike of monopolies.

The Worm Jawfare account also surfaced an even more ludicrous example of conspiracy paranoia. As you can imagine (I’m doing you the courtesy of assuming you don’t hang around in these cesspits yourself), a lot of the grifter discourse revolves around anti-vaccine misinformation.

Extremists are ultimately in it for the money, and will cleave to anything that advances that

There was an outcry when Game stores decided to host "vax appreciation Wednesdays", where those who can prove they’ve been vaccinated can claim a 10% discount. (Each discount has a ceiling of R10,000, which is starting to make Wimpy’s free coffee look a little cheap, to be honest. Mind you, I’m not sure what you’d be spending R10,000 on at Game.)

The offer cued the usual calls to cancel Game, with the alt-woke grifters proudly — perhaps I mean "deludedly" — calling for a boycott to shut it down. Presumably the same boycott that has brought Wimpy, DStv, Spur and other once-mighty businesses to their knees.

The CIC of the channel in question (that’s "clown-in-chief", before you accuse me of an EFF-type allocation of military titles on a whim) posted: "Ordinary people have the power. Boycott. Go elsewhere. Vote with your money. If businesses want to ‘force’ vaccines onto their staff, then cripple those businesses. Let them collapse. They are not your allies. Take a stand."

It’s all about freedom of idiocy, which is apparently one of the rights that’s enshrined in constitutions.

One Justine K revealed that "Game … are owned by the Walton Family (Walmart) in USA. They are one of 13 bloodline families. Walmart USA has vaccinations in store and are already implementing coif [sic] passports at all their stores. We need to boycott them … also child trafficking … you should see what I uncovered in Fourways between Game Leroy Merlin (inside the Monsanto building) Builders Warehouse express all within 4km of each other with a HUGE underground tunnel and DUMB facility."

Reader, you will be disappointed to learn that a DUMB facility is not the control centre where they monitor idiots like Justine K. Supposedly, and quite without irony, it stands for "deep underground military base".

Yes, you heard it here second. Game in Fourways has a secret underground military base, which is why the company is offering discounts to get people to vaccinate. Also, "child trafficking" (apparently something you just say when you’re an alt-right idiot) — because everyone knows it’s true.

As entertaining as it is to poke fun at the conspiracy theorists, and the remora grifters that feed off their stupidity, we have to remind ourselves where it can lead us, why they do it, and how they flourish.

One of the social media platforms I monitor is called Gab. On the recent occasion of its fifth birthday, its CEO sent an e-mail to its followers in which he describes Gab as "a bootstrapped start-up funded by its users and ran [sic] by a God-fearing stay-at-home Christian dad from his rural homestead". It is, he says, fighting against "the unlimited resources, influence, and political power of the American Oligarch Regime. A truly David versus Goliath story where once again God demonstrates His merciful Grace and magnificent power."

A more accurate description, courtesy of Wikipedia, might be that Gab is "a haven for extremists including neo-Nazis, white supremacists, white nationalists, the alt-right, and QAnon conspiracy theorists, [and] it has attracted users and groups who have been banned from other social media and users seeking alternatives to mainstream social media platforms".

According to Gab, the platform has more than 15-million monthly users.

As laughable as they are, the absurd, crazy opinions of the alt-right are also dangerous

The Gab business plan is precisely what our local mini-grifters are trying to implement as they spread hate speech and anti-vaccination messages. Gab’s CEO tells us defiantly that he "will not sit by idly and watch as Christians are persecuted for their faith".

"I will not shut up and watch as an entire race of people is demonised, attacked, and dehumanised. [Spoiler: he means the white race.] I will not accept rigged elections, medical tyranny, and financial blacklisting as the ‘new normal’."

And then, of course, there’s the co-opting of Gab’s financial followers into the battle. "Thank you from the bottom of my heart to … our customers, donors, and shareholders for making Gab possible. You all inspire, motivate, and encourage me to press forward in defence of free speech for all mankind and for the glory of Jesus Christ my King. May God bless you and God bless Gab. Jesus is King. Please consider upgrading to GabPRO for just $15 a month or making a one-time purchase/donation from our shop."

As with the local examples unearthed by Worm Jawfare, we might be tempted to make fun of such a blatant example of people turning division, bigotry and hatred into a money-making enterprise. But it’s worth noting that Gab was one of the platforms used to co-ordinate the storming of the US Capitol in January.

Just as we must shudder at the thought of our alt-right minority identifying with the Taliban, we should also be aware that the undercurrents of racism, hatred and xenophobia that are freely at play on the darker platforms have the potential to translate into real-world violence. And the people who are profiting from this are just going to see that as a business opportunity.

We need to stop thinking of antivaxxers as outright stupid, and instead try to find ways to convince them to ditch their dangerous beliefs
Features
10 months ago

Much of the breathless reporting of UCT lecturer Lwazi Lushaba’s now-infamous political science lecture is based on 12 seconds of a 55-minute video. ...
Features
1 year ago

Dudu Zuma-Sambudla is Jacob Zuma’s very own Twitter hagiographer. All who join the former president for tea at Nkandla are similarly cast as heroes ...
Features
1 year ago
Next Article