Kenny Kunene has two wrists, so he needs two watches. By similar logic, Ramaphosa wants us to feel sorry for MPs with two homes who have to spend twice as much as ordinary mortals 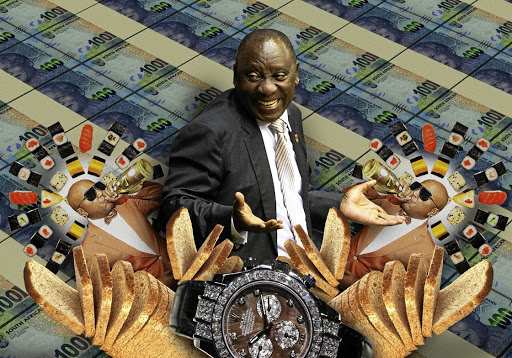 One of the essays in Bongani Madondo’s excellent collection, Sigh, the Beloved Country, is titled "Midnight Pasha! Kenny Kunene’s Vile Bodies". In it, Madondo recounts his visit to the "closing soirée" of ZAR in Sandton, Kunene’s "Zuma-age nightclub of choice for the young, the intemperate, and the outlandishly rich … where the new money Afristocracy and its attendant hangers-on can play wildest fantasies unmolested".

You may remember Kunene as "Mr Sushi", famous for holding parties at which guests ate sushi off the bodies of semi-naked women.

He stopped doing that in 2011 when the ANC complained. Kunene presciently said, as IOL tells us, that "it was never his intention to associate the eating of sushi off women’s half-naked bodies with the ANC".

Well, that sushi boat has sailed, given the way we think about corruption in the ANC right now.

Reading the responses to President Cyril Ramaphosa’s crass, out-of-touch comment about "struggling MPs" last week, I was irresistibly reminded of Madondo’s description of Kunene’s bling on the night in question.

"From the DJ booth, his pal, famed music producer Oskido, announces: ‘Hail Kenny Kunene! Kenny Kunene is a rock star.’ Before the doof doof fades out and ‘rock star’ Kunene himself takes over the turntables to display his long-held childhood aspiration to be a deejay, I notice he wears two watches.

"‘One is a Rolex Oyster with diamonds inside and this on the left is an IMC [sic],’ he tells me, dashing to the stage."

It’s the same sad and pointless flaunting of wealth that so many of the corrupt ANC dominoes now falling have embraced, where just two luxury cars aren’t enough, you need an entire fleet, and where it’s only worth ordering a round of drinks if it costs at least 10 times the annual salary of ordinary South Africans.

It’s almost as if we’ve become inured to these excesses.

And yet, Ramaphosa struck a chord when he told us, as News24 reports, that MPs have been "cut to the bone because they have had no meaningful increase for quite a while".

He told us not to trust our eyes. "I have seen members of parliament, who publicly seem to be living it up, but they are not. The work we take on or impose on them as MPs is quite costly; many of them don’t end up making ends meet."

As if this wasn’t bad enough, he doubled down, and ascribed this penury to MPs usually having two houses — "one in parliament and one where they come from".

"It may seem to many people that they are living it up and they have a very good life — believe you me, it is not," Ramaphosa is quoted as saying. "You buy one loaf of bread at home, you have to buy one here. You buy two loaves, two TVs, two of nearly everything."

Yes. He is telling the people to whom our government allocated R350 a month of financial relief — who can’t afford one loaf of bread — that we need to feel sorry for those who have to buy two loaves, two TVs, and two of everything.

That’s really asking for the level of empathy of a saint.

As one Twitter user put it: "Thoughts and prayers to the MPs with their two houses, private medical aid and other benefits from the public purse during this difficult time."

As another, more famous Twitter user, recently ex-MP Phumzile van Damme put it: "If you live beyond your means you’ll struggle. R50K p/m cannot afford LV, Gucci etc but people want to stunt. I understand some have big families, many in SA do & have to make do. Budget, save, live the life you can afford. Simple."

Amusingly, it appears that DA MPs are being paid below the market rate. According to The Citizen’s Rorisang Kgosana (described as a "premium journalist" — what the hell is that?), "while the average SA salary is just above R10,000 per month and the minimum wage hovers around R3,500, the country’s MPs are apparently struggling to make ends meet with their average monthly salary of R95,000".

That’s a lot more than Van Damme seems to think they get paid, but that’s a conundrum for another day.

Replying to Van Damme, Michael Khaya Ngubeni probably summed it up best: "Am not surprised at all by this comment from Ramaphosa, after all he’s a billionaire."

I don’t actually have any startling insights to share about this topic. It is as blatantly, tragically obvious as this: our government has lost touch with its voters.

In another of his fabulous essays, "Herman Mashaba: Capitalist Negro", Madondo writes about meeting the then soon-to-be Joburg mayor to work out what motivates him.

Mashaba is angry about the lack of economic opportunities in SA, and Madondo uses this quote as the epigraph to his piece. "When I had to give up my university studies 35 years ago I was so angry that I wanted to leave SA, get military training and an AK-47 and come back to kill evil white people … I’m just as angry now as I feel my economic freedom is under threat."

It’s not too fanciful to imagine that people are starting to feel an analogous anger towards the SA government, though that’s a premise that it would take someone actually experiencing it to advance authentically.

In Madondo’s piece, he quotes Mashaba on what motivates him. "This country sits at close to 40% unemployment rate, the majority of those being the youth. The black youth, specifically. How sustainable is that?"

That book came out in 2015. Currently, according to the FM, "on the narrow definition of unemployment, 32.6% are without work — which is the highest since Stats SA began producing its ‘Quarterly Labour Force Survey’ in 2008. But if you look at the expanded definition, which includes those who’ve given up looking, this unemployment number balloons to 43.2%. Dig deeper, and you’ll see that, horrifically, 74% of the youth have no job and, at this rate, scant hope of ever being employed."

I don’t know about needing them, but we’ve sure got them. The straw men, the hollow men, who pretend to care for the people, but actually don’t seem to know who the people are.

And somehow, it feels more shocking that we have a president who could think it wise to defend increases for MPs who earn R95,000 a month on average, than it is to see two expensive watches being worn at the same time.

The fact is, MPs’ salaries are many multiples of the average salary in SA
Opinion
11 months ago
Next Article