In SA’s Olympic outfits, local designers have claimed, reclaimed, mashed up and mangled the symbols of our past. That’s a good thing 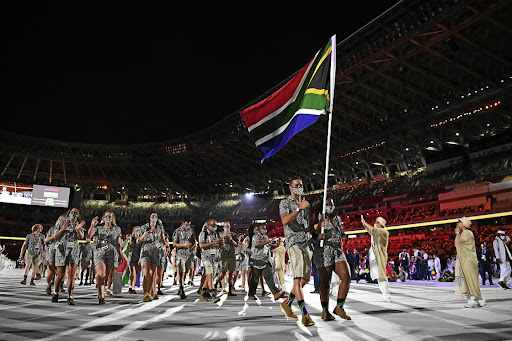 Firing up Twitter this past weekend, I was amused to see what some of the denizens of social media had decided was the most pressing issue of the day. Not the continuing taxi violence in the Western Cape that, according to the Mail & Guardian, has since the start of the year been responsible for 83 murders and 56 attempted murders; in July alone, more than 20 people have been gunned down. And not the 20 people killed in Phoenix, KwaZulu-Natal, in murders associated with the unrest in the country.

No, what really bothered them was that a bunch of SA athletes were wearing veldskoens and crappy Mr Price zebra-print outfits at the opening of the 2020 Tokyo Olympics.

Let me hasten to point out that I’m not criticising people on social media for what they choose to rail against. I’m sure they’re capable of being upset at more than one thing at a time. Hell, I know they are, I’ve watched them angrily shaking their fists indiscriminately at every Twitter word cloud that wafts past. And I’m going to succumb to the same temptation, ostensibly ignore the hard news, and devote a column to the subject of our Olympic outfits.

Why, you ask. Because everything is connected, that’s why. What our athletes wear at the Games affects things like how we think about Jacob Zuma going to jail, or President Cyril Ramaphosa’s weird predilection for announcing big lockdown changes late on a Sunday night so that businesses don’t have time to get ready for Monday.

I think it’s called the butterfly effect in chaos theory, "the sensitive dependence on initial conditions in which a small change in one state of a deterministic nonlinear system can result in large differences in a later state".

So if a butterfly wears a Gavin Rajah gown in Sandton, a fashionista dies in Paris. That’s science. I didn’t invent it.

A big part of the criticism of SA’s outfits at the Olympic opening ceremony seems to revolve around the veldskoen shoes designed, made and sponsored by Veldskoen Shoes, a company out of Durban.

Some of the more charitable gibes were things like "Boetie goes to the Olympics" and "It looks like a bunch of confused farmers in vellies and khaki".

On the (white) face of it, this does seem to be a homage to farmers, but in SA nothing is ever simple. Many people, including Veldskoen Shoes itself, pointed out that the shoes "were first documented by the first settlers in Africa over 400 years ago. And according to Khoisan tribal folklore, they were made and worn by the tribe as far back as a thousand years before that."

As an antidote to that marketing speak and dodgy ethnography, journalist Lester Kiewit put it more succinctly. "Wait till the black people in Clanwilliam hear when you say their ancestors’ then-rudimentary footwear (appropriated of course) isn’t African and shouldn’t be part of an Olympic uniform," he tweeted.

The clothing designs were by Mbali Zulu, Nompumelelo Mjadu, Sandile Sikhakhane and Sipho Lushaba — four young artists commissioned by the Durban Fashion Fair — and this is apparently the first time that our entire team kit has been created and produced locally.

As Forbes magazine put it: "It may not be memorable as a fashion statement, but it is a commendable experiment in divesting from corporations to the people. Given recent unrest in the country, this may provide a rare instance of unity."

Making our own
fashion mistakes at
the Olympics, rather
than outsourcing
them to other
countries, is very
encouraging

We might have forgotten the kit at the 2016 Rio Olympics, which was so bad it prompted questions in parliament. It was made, and sponsored, by a Chinese company called 361°, and besides being inordinately ugly (lime-ish green with a wash of yellow vomit down the front), which you kind of expect, it also didn’t fit. Some of the athletes had to fork out their own money to pay tailors to fix the size disasters.

In the days when news sites used to run April Fool’s stories, before most of them realised that they were just training up their readers to fall for fake news stories at the drop of a dunce’s cap, I wrote one that affected the design and production for SA’s Olympic kit.

The story was about how the government was calling for new design submissions for the SA flag. The 1994 design, the story claimed, had only been intended as a temporary, five-year stopgap.

What made the story plausible was that the SA flag, designed by Frederick Brownell in 1993/1994, was, in fact, initially intended as an interim flag. (A perhaps interesting bit of trivia, and since we’re talking medals this month, is that Brownell, the designer of both the SA and Namibian flags, is the only person to have won the Vexillon Award for excellence in the promotion of vexillology twice — in 1995 and 2015.)

And what made the April Fool’s joke even more believable was that, even back then, most people were willing to believe that the government had forgotten to finish the job.

Flash forward a few weeks, and I get a call from someone at the company that’s working on the logo designs for the SA Olympic team. The woman is apologetic, but she wants to know if, by any chance, I remember a story about the flag changing. On her recommendation, they’ve been holding off on finishing their designs, but now time is getting tight.

Yes, I tell her, I actually remember the exact date of the story. April 1. After a moment, the light dawns, and she sheepishly mutters a curse under her breath.

I tell the story not to make plain the gullibility of people — the ivermectin idiots have pretty much cornered that market — but to highlight how uncertain a thing a national symbol is for South Africans. I can only imagine that the four young designers who gave us the veldskoens, khaki and zebra print have a vastly different relationship to history and style than the people who saw those elements as objectionable. Where someone else sees the comfortably clad foot of oppression, they see a witty stylistic intervention.

Where a survivor of the awful fake animal print disasters of the 1980s experiences a flashback to the fashion desert that was a certain part of SA, they see a … actually, I’m not sure what they see there. I doubt they’re referencing that quotation by Pik Botha, the last apartheid foreign minister, who once said, if memory serves me, that SA was like a zebra. "You can’t shoot the zebra in the white stripe without also killing the black stripe."

I’m still not really sure what he was on about. But what I am sure about is that I find the fact that we’re now making our own fashion mistakes at the Olympics, rather than outsourcing them to other countries, very encouraging. It’s a positive thing that the symbols of our past, even though what they symbolise hasn’t yet been properly addressed, are being claimed, reclaimed, mangled and mashed up by young designers creating a world of their choosing.

Sure, it’s a year later than planned and sans spectators, but it’s a delicious distraction from the real world
Opinion
5 months ago

Training in Spain for the Tokyo Games has imbued SA’s road riders with a quiet confidence, and a battle plan
Opinion
6 months ago

Since its inception in 1896 the modern Games has been through the best and worst of times, and it always comes through
Life
6 months ago
Next Article