You may not agree with her, but Helen Zille’s new book is incisive and aptly articulates SA’s profound despair. But she goes wrong when she goes to war against the mythical enemy of ’wokeness’ 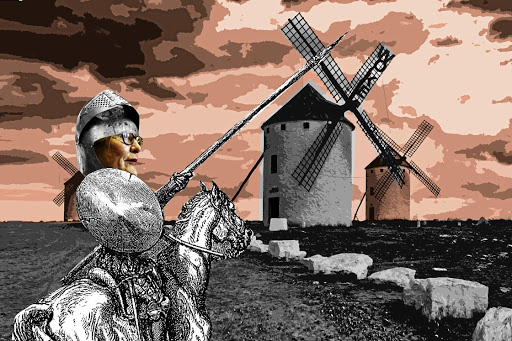 One of the footsimpletons in Helen Zille’s new alt-Woke brigade felt the need to praise her by comparing her new book, #StayWoke: Go Broke, with those of noted Canadian self-help philosopher Jordan Peterson.

It’s the sort of misplaced cheerleading, based on a tribal identity, that reveals the paucity of her current fan base and their intellectual constraints.

Her writing is much, much better than Peterson’s. In this book, it’s clear, incisive, and perfectly pitched for any reader looking for someone to articulate the profound despair our country finds itself in, and to chart a comprehensible, bite-sized way out of the mess.

Many won’t agree with what she says, but for many others, this is an excellent self-help book.

I’m averse to spoonfeeding readers, so I conveyed my sentiments using a mix of ironic juxtaposition and hyperbole. I knew that readers who pay attention would understand that I was indicating how important it is for SA to have a strong opposition party.

Losing the DA as the chief opposition would be disastrous because it would, in one version of the timeline (and I accept that there could be other versions), be paralleled by the growth of populist parties, or by an untrammelled ANC with even fewer safeguards against its rampant corruption.

Populist parties can only really do significant damage if voters are driven to the extremes. So it’s bad for our democracy that the DA is losing ground, which is happening partly because of the ammunition its social media blunders give its enemies.

Of course, there are many readers who do not pay attention but seize on one component of an argument and rip it out of context. Chief among these are the alt-Woke — those fans of Zille who demand that life be without nuance, a simple battleground between us and them.

Zille’s book is written for them. It constructs an imaginary enemy, "the Woke", a catch-all term that allows the simmering racists, frustrated misogynists and baffled bigots a handy and safe outlet for their rage.

Here, "woke" replaces all the other traditional insults they aren’t allowed to use anymore, because the poor dears don’t have a safe space to just be themselves online.

"The politics of personal destruction," Zille writes, "always involves high drama, which is an excellent distraction from the real issues a society should be facing up to. That is why this method is so popular among those who preside over failing states or institutions. The best counter-strategy is diversion."

She apparently sees no irony in this statement, and in making the central narrative in her book her own personal experience at the hands of those who insisted on taking her statements (such as on the benefits of colonialism) out of context and using them to bludgeon her on social media.

And she absolutely doesn’t seem to see the irony of her #StayAntiWoke or Go Broke strategy, which to those who haven’t drunk the blue Flavour Aid (Zille described DA-supporting South Africans, whatever their race, as blue people exemplifying "blue values") looks like a diversion from the failure of the DA to retain its voter base.

But if you’re a politician looking for a cause to rally people around, you need a catchphrase, rather than a characterisation

But let’s cherrypick from Zille’s book. Before we do so, though, let’s remember why she says she wrote it.

One reason, she told an interviewer, was that young DA leaders get a reading list when they join the programme, which Zille gets to approve, and there was nothing on it worth reading "for young people having to face the realities of wokeness".

When no-one could find such a book, she says: "I thought, ‘Well, look, if there isn’t such a book, I’m jolly well going to write one.’"

Zille, who like all great politicians isn’t short on ego, also tells us: "This world is difficult for ordinary mortals to fathom. I have spent a great deal of time reading about it in an attempt to understand it. I think I have grasped the basics and will try to explain them as simply as I can."

Here are some of the bits of Zille’s book which exemplify why we need a credible, broad-based opposition as a corrective to the ever-unfolding disaster that is the current governing party.

"The ruling ANC has become an interlocking network of competing criminal syndicates, seeking to control the myriad ‘cash dispensers’ that the state offers, rather than governing the country," she writes.

Zille adds that "the ANC … has legalised corruption, created channels for looting, resulted in the collapse of state-owned enterprises, government departments and municipalities, and brought misery to millions".

Very few undecided voters would argue with this characterisation, and you’d think this would be part of the message that gets them to vote DA.

To the DA’s credit — and leaving aside whether you agree with it or not — the party hasn’t chosen the easy route of only taking advantage of the colossal failures of the ANC to run a campaign which is just about voting against the ANC.

Instead, they’ve unveiled a strategy that also talks about the positive things the DA stands for, that looks to a different future, rather than a simple annulling of the present.

This column doesn’t have the space to look at the way they’re getting that messaging wrong, but you can see a similar paradigm playing out in #Stay Woke: Go Broke.

Zille identifies all types of nasty, self-serving people who take advantage of the uneasy terrain South Africans are tiptoeing across in our efforts to build an inclusive democracy. But rather than see them as individuals making choices, she sees them as part of a global movement designed to … actually, I couldn’t quite make out what Zille thinks "wokeness" is designed to do.

Maybe it’s something about oppressing the Marlboro Man or, possibly, white men in general. Or as she plaintively writes: "Eviscerating the moderate, liberal middle class (which is my personal comfort zone)."

The most troubling thing is Zille’s insistence on judging aspects of the present against the lodestone of apartheid or the spectre of Zimbabwe.

"So it was with the National Party," she writes. "Apartheid was premised precisely on the ‘woke’ idea that a person should be judged by the colour of their skin, not the content of their character. The Woke generation, who never lived through apartheid’s racial engineering, would probably be highly offended to learn that they have embraced the policies of race classification and racial preferencing that lay at the heart of the system they claim to despise."

And, talking about whether life is getting better for most black South Africans, Zille tells us that "the ANC would perhaps rank even worse than the apartheid government (not even I would dare to tweet this, but it is actually true)".

As with every other curmudgeon with a cause huddled around their single-bar gas heater when Eskom turns the lights off, Zille sees Zimbabwe as the great warning for what happens when you don’t embrace the positive aspects of colonialism. "Perhaps we prefer wandering blindfolded down Zimbabwe’s dead-end of decolonising everything, including our currency," she writes.

I haven’t even touched on how dramatically Zille chooses to misunderstand what she terms "wokeness", because that’s almost besides the point. Most of the egregious examples of "wokeness" that she describes are really just people being jerks.

But if you’re a politician looking for a cause to rally people around, you need a catchphrase, rather than a characterisation.

Near the end of her book, she tells us: "It takes enormous courage and principled determination to stand up against the encroachment of the ‘fear society’. Having lived through the apartheid era, as an outspoken critic, I find it harder to question the tenets of Wokeness today than it was to speak out against racist policies and prejudices 40 years ago."

This could very well be true. The evil of apartheid was stark, and it was real, whereas "wokeness" (and I insist on the inverted commas) doesn’t actually exist in the way Zille wants us to believe. Which, obviously, makes it much harder to fight.

Whether you’re for or against Zille and her #GoAntiWoke crusade, you should read this book.

As she says: "Although there is much less room for optimism today than there was at the dawn of our democracy, we cannot give up on the quest for a nonracial democracy, governed by the rule of just law, without a fight."

The people who are going to take up the cudgels against what they term "wokeness" are part of this fight, for better and/or worse. And this book will help you understand them.

For a party that has embraced nonracialism, the DA is now flirting with the trope of the white farmer as a particular type of victim of violence in SA
Features
10 months ago

Herman Mashaba’s casual disregard for the facts about migrants in SA is a dangerous appeal to populism, and carries the seeds of violence
Features
10 months ago
Next Article