We need to stop thinking of antivaxxers as outright stupid, and instead try to find ways to convince them to ditch their dangerous beliefs 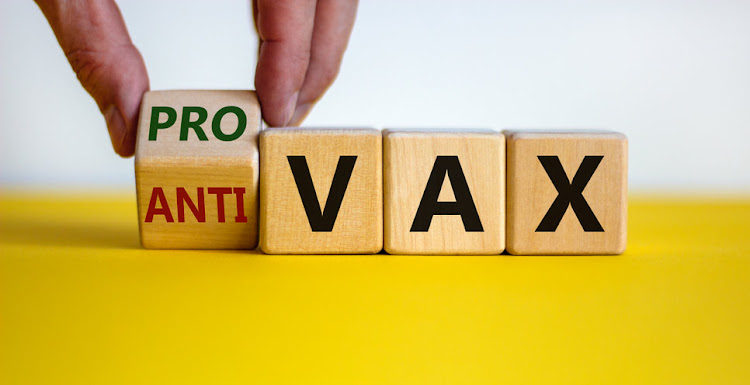 You may find this difficult to believe, given my manly, rugged demeanour — which I’m sure you can intuitively picture, by reading my hard-hitting columns — but I suffer from trypanophobia. Yes, that’s right. A fear of needles.

Until today, despite having found myself gradually regaining befuddled consciousness in a doctor’s room at least once every few years, I didn’t know it had an official name. Which is silly of me, when we live in a world where even fear of peanut butter (arachibutyrophobia) and fear of long words (hippopotomonstrosesquippedaliophobia) have official names.

Apparently, trypanophobia was officially recognised in the 1994 edition of the scarily named Diagnostic and Statistical Manual of Mental Disorders as "a specific phobia of blood-injection-injury type phobia".

According to my 30-second "research" (yes, the same high level of research as antivaxxers), people who have this phobia tend to avoid inoculations and blood tests and, in really severe cases, any medical care at all.

As you can imagine, having a fear of needles in the world we live in, where one of the main topics of conversation is whether or not to have a needle stuck in your arm (or how liberating it was when you did, or how much you hate the government for trying to force you to do so), is trying at best.

The reminders are constant and everywhere. For example, this tweet by Wimpy SA popped into my feed recently. "Let’s just be lekker, man, and say: ‘YAAAS’ to the future! Enjoy a FREE regular Filter Coffee when you get your jab. #CupsForVacs. Just present your vaccination card at any Wimpy to qualify."

I was going to draw a parallel here between my childhood incentives to be brave when injections were in the offing and Wimpy’s offer of a Wimpy coffee. Unfortunately, given pecuniary circumstances, my childhood incentives were less around sweets and more around a promise to try to catch me before I hit the floor. But I do like the idea that corporates are doing their bit to push vaccinations.

One of the first responses to Wimpy’s offer was the predictable lament about being oppressed, coming from the usual types who think the word oppression means "mildly inconvenienced".

One Patrick Swanepoel wrote on Twitter: "So u discriminating against the unvaccinated? You will not see me or my family in any of your stores again."

Well, Patrick, that’s the best outcome possible for Wimpy. Does the company really want you in its stores, killing its customers? I think not.

We need to be relentless, within the parameters of the law, in our fight against antivaxxers. They’re just not cute any more

Someone who might or might not be called Gitte Theron (hey, it’s social media) wrote: "So you’ve joined the list of private companies who discriminate against people who exercise their right of freedom. Ultimately everything is about money. So how much are you paid for this campaign?"

I’m going to go out on a limb here, and suggest that Gitte’s grasp of the economics of marketing is probably as good as his/her (see social media note above) knowledge of epidemiology.

The tweet was accompanied by an actual picture of a yellow cloth Star of David, the device the Nazis used to identify Jews in Nazi-occupied Europe, with a badly photoshopped "Corona App" emblazoned on it.

So I guess we can add lack of historical knowledge and blinding stupidity to Gitte’s list of accomplishments.

And then, of course, there was David Pretorius: "You will NEVER see another cent from me or my family! You are breaking the law by giving incentives to people for taking up medical procedures! You are an embarrassment!! People will boycott you! Ask Spur what happens. GEMORS!!"

What did happen to Spur? Not much. We know that the Davids of this world, because their lazy thinking is mirrored by their lazy activism, never actually boycott anything unless it’s something they don’t use anyway.

I don’t think we saw DStv crumble when people like Steve Hofmeyr started their boycott. But this is going to become more of an issue as companies start putting their staff vaccination strategies into play.

On News24, there’s an in-depth analysis of compulsory workplace vaccination, and what author André Vlok describes as the "spectrum of economic arguments, balancing of interests, legal and constitutional considerations and emotions".

The article has 18 question marks in it (I counted), so as you can imagine, this is a very contentious issue.

We could spend significant time debating the multitude of legal questions around compulsory vaccinations, and perhaps slightly less time discussing the ethical considerations. As this is a column, though, I’m going to go for the personal take, which is that we must be relentless, within the parameters of the law, in our fight against antivaxxers. They’re just not cute any more.

There are many people pointing out the absurdities of the antivaxxer viewpoint and making fun of them, but we need to redouble our efforts. And perhaps just pointing out their craziness isn’t enough.

In the US, where antivaxxers number in their millions, they’ve become, in the words of Vanity Fair, "so stridently batshit in their views that the people in their lives who’ve decided to listen to science have resorted to getting vaccinated in secret for fear of provoking their wrath".

That’s madness, though in a society where abortion clinics are bombed, it’s possibly not that surprising.

The one solution, of course, is to try to understand the antivaxxers’ point of view — not to empathise, but to be able to come up with the right tools to change their minds.

Though we idly refer to arachibutyrophobia as a fear of peanut butter, it isn’t really. It’s specifically a fear of peanut butter sticking to the roof of your mouth. It’s theorised that the cause of this fear could be because of a personal bad experience, because you watched someone choke on a peanut butter sandwich, or because (and this one makes logical sense) you actually have a peanut allergy. As mental health platform United We Care puts it: "A traumatic incident with peanut butter in the past can snowball into [an] extreme form of anxiety in the future."

One solution is to try to understand antivaxxers, to be able to come up with the tools to change their minds

While I would love to accept that antivaxxers are just stupid, we need to work out where their standpoint comes from, and try to correct it.

The last time I went for an injection (besides my vaccination, which you’ll be happy to know I received without actually passing out), I warned the nursing sister administering it about my phobia.

She told me that she’d had a Springbok flyhalf in for a blood test a while back and he’d fainted. It’s a warrior’s impulse, she said. When warriors got injured and fainted, they’d look dead and be left alone. And the blood pressure drop stopped them from bleeding to death. The survivors passed on this fainting gene.

It was a sweet lie, and it got me through that particular injection with good humour. Our task now is to create the stories that will make antivaxxers ditch their absurd and dangerous beliefs.

Wimpy’s campaign, which so elegantly combines the familiar homeliness of Wimpy coffee with a reward system for doing good, is one way this can work. I hope there are many more in the offing from corporates.

Nids-Cram data reveals that those who are hesitant about vaccination aren’t particularly religious, but that they are often younger and tend to ...
Features
1 year ago

1.
The cost of being middle class
Features / Cover Story
2.
Could new abortion rules in the US affect the ...
Features
3.
ANALYSIS: Low-hanging fruit no-one can reach
Features
4.
How government betrayed SA’s construction firms
Features
5.
How Malema handed power to the DA
Features

You may refuse to be vaccinated, but mind the consequences

You may refuse to be vaccinated, but mind the consequences

1.
The cost of being middle class
Features / Cover Story
2.
Could new abortion rules in the US affect the ...
Features
3.
ANALYSIS: Low-hanging fruit no-one can reach
Features
4.
How government betrayed SA’s construction firms
Features
5.
How Malema handed power to the DA
Features