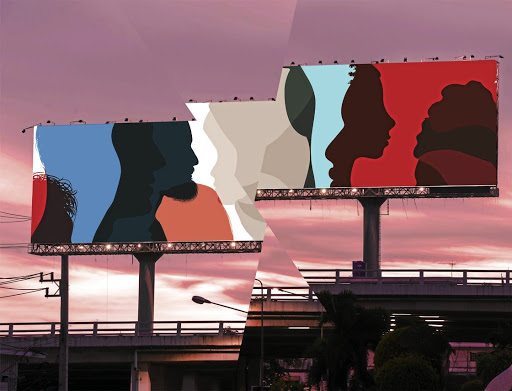 Sadly, the billboard for the Institute of Race Relations (IRR) on the M1 in Joburg, which proudly proclaims that "Racism is NOT the problem", is only the second-most stupid billboard of the month. Top honour goes to the one put up illegally in Cape Town by a company called San-i-Tize, a name that already gives away a predilection for recycling US conspiracy tropes by its use of a Z in sanitise.

The billboard, in all its galumphing glory, states: "In Gates YOU trust?! In God WE trust. No ‘vaccine’ for us."

Leaving aside the blinding stupidity of the sentiment, which seems to imply not just a common or garden belief in an imaginary deity but also a belief in an imaginary Gates who is personally responsible for creating vaccines, the truly stupid thing lies in what this company does. It "specialises in the direct importation and distribution of medical and emergency supplies to state and private hospitals, governments and the private sector".

A company that makes its money from selling personal protective equipment and sanitiser is anti-science.

The billboard, of course, doesn’t just contravene the dictates of common sense; it also contravenes the disaster risk management regulation that prohibits the spreading of Covid misinformation. And, according to news site IOL, "the City of Cape Town said the signboard is illegal as the owner has not applied for authorisation in terms of the city’s outdoor advertising and signage by-law".

Reactions to the furore about the anti-science billboard include the entirely predictable misunderstanding of what freedom of speech actually entails. A representative example is this one, quoted in the Cape Times. "Debbie Els, from the Stop Farm Murders Movement and an anti-Covid vaccine campaigner, accused the government of ‘censoring’ people from the truth yesterday. ‘They have a right to put a billboard up, it’s the true freedom of speech and choice. Government wants to censor the truth from people. The DA is pushing this New World Order agenda as well,’ Els said."

Oh Debbie. It’s one thing to not believe in science, but you have to believe in municipal by-laws. The New World Order — and many of you won’t know this because of stuff mainstream media won’t tell us et cetera — is a powerful and highly secretive elite, though not powerful and secretive enough to evade the eagle eye of The Debbie.

This elite is conspiring to eventually rule the world by replacing nation states with an authoritarian one-world government.

One feels that co-opting the DA’s creaky communications team into this is an uncharacteristic misstep by the Illuminati, but fine.

Some might argue that the IRR’s billboard actually trumps this one, because it’s the allegedly considered opinion of a whole funded organisation, not just a couple of crazies in a small company that sells rubber gloves.

What is it with billboards? In a world where you can reach millions of people on social media, why would you go to the bother of erecting a physical sign? Perhaps the clue is in the word "erect".

The image on the front page of the "Racism is NOT the Problem" website to which the billboard directs you is Passive Resistance, a 1994 localised version of an 1830 painting, Liberty Leading the People, by French artist Eugène Delacroix. The artist, Reshada Crouse, tells us she "intended this painting to be in appearance reminiscent of a giant billboard".

Using examples of self- interested claims of racism as a reason to belittle the entire problem is at best intellectually dishonest, and at worst severely damaging

Where the Delacroix original has Liberty at its centre, bare-breasted and barefooted, standing on a mound of corpses and wreckage, Crouse’s version has her on the right, behind three men, one wearing gym gloves and clutching a machete, another in a corset and long white evening gloves caressing an AK-47, and one who is sort of staring dolefully at the viewer. In the left foreground, there’s a woman kneeling over what appears to be an ailing body. For some reason, these figures have all been cropped out of the version used on the website.

The people in the painting are apparently modelled on prominent members of the SA theatre world at the time.

Quite what the IRR intends this symbolism to convey is unclear. That the revolution will not only be televised, but a work of fiction? Perhaps.

If the IRR billboard had said "Racism is not THE problem", with its implication that it’s one of many problems, we might react differently. But saying "Racism is NOT the problem" implies, of course, that it’s not a problem at all. That’s the dominant message in both the billboard and the movement’s rallying cry.

This is not precisely what the IRR says on its site. It writes: "Is racism a problem? Yes. Racism against ‘Asian’ people and ‘white’ people is increasing, which is disturbing."

Who knew? Racism is a white person’s problem, but not in the way you might think.

The IRR does add that it’s also disturbing that "some ‘black’ people and ‘coloured’ people suffer from racism, albeit at decreasing rates". So that’s OK.

Or how about this gem: "The supermajority of South Africans already know that skin never equals sin, that racism is not everywhere, and that merit beats quotas. We have the data to prove it. If you don’t believe it, ask a few thousand strangers, like we did."

What is a supermajority? Is that like a majority, but they wear their underwear on the outside of their pants?

There’s the eternally plaintive appeal against affirmative action, naturally. And it’s also kind of funny that the organisation insists it didn’t just ask its buddies, but found some actual strangers to bother.

I do like how it sneaks in the biblical allusion to sin, and the language of the "Racism is NOT the problem" movement does read a bit like a mash-up of biblical barnstorming, QAnon fancifulness and adolescent fantasy novels.

"Come back to The Journey every week as we descend into winter and learn the world of hardship and possibility," we are told. "Our greatest threat is the inculcation of a new racial ideology through the machinations of multimillionaire and billionaire race-baiters and politicians wedded to blood and soil dogmas."

The IRR’s language, and opinion, are both wrong in its billboard about racism

The truly startling revelation of the IRR’s survey, though, is not that — yay! — racism isn’t a problem any more. No, it’s the fact that it does exist, but poor defenceless white people are the target.

Assessing responses to the question, "Have you personally experienced any form of racism over the past five years?", it turns out the most oppressed demographic is … yes, whites, at 28.4%. Reverse racism, bru!

If this isn’t an indication of the sort of distorted audience the IRR is reaching out to, then I don’t know what is.

And now we wait for the IRR’s impassioned right of reply in next week’s FM, when it points out that I’ve misrepresented the organisation, and that the real point of the movement is to highlight the following part of its survey. Asked if "politicians are talking about racism and colonialism to excuse their own failures", those in agreement by race were: black, 52%; coloured, 58.7%; Asian, 65.1%; and white, 63.2%.

Yes, indeed, that is one of the positions that any right-thinking person would hold, that corrupt politicians and businesspeople do, sometimes, attempt to deflect their own culpability by attempting to co-opt the ongoing battle against racism. Just recently, for example, we had the mayor of Joburg telling us that complaining about the fact that his city is falling apart is based on racist assumptions.

But using examples of self-interested claims of racism as a reason to belittle the entire problem is at best intellectually dishonest, and at worst severely damaging.

Why does the IRR feel compelled to downplay the reality of racism in SA? "Only that way can we get real about our problems, which means taking the practical steps to solving them," the organisation tells us.

Really? We can’t fight racism at the same time as battling our government’s singular ineptness at dealing with unemployment, crime and the many other problems facing SA? Do you really think that claiming that racism is not a problem will stop those who are operating in bad faith from using it as a mechanism to shift attention? Or, and I fear this is closer to the truth, have you now just set back the process of dealing with racism in SA, and thereby further enabled those bad actors you decry?

You may not agree with her, but Helen Zille’s new book is incisive and aptly articulates SA’s profound despair. But she goes wrong when she goes to ...
Features
1 year ago

Dudu Zuma-Sambudla is Jacob Zuma’s very own Twitter hagiographer. All who join the former president for tea at Nkandla are similarly cast as heroes ...
Features
1 year ago

For a party that has embraced nonracialism, the DA is now flirting with the trope of the white farmer as a particular type of victim of violence in SA
Features
1 year ago
Next Article