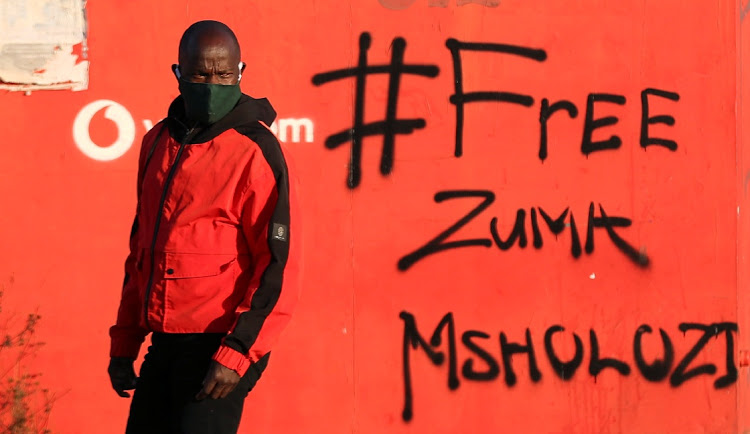 A man walks past a graffiti with the words #FreeZuma in Vosloorus,Gauteng. Picture: REUTERS/Siphiwe Sibeko

In the eponymous play, Juliet rhetorically asks Romeo, "What’s in a name? That which we call a rose / By any other name would smell as sweet." One of the implications being, what you call something doesn’t change that thing’s innate attributes.

You’d assume that a similar logic, if logic is the word, would apply to the recent looting and violence, and how it is being defined and categorised in the media. What’s in a name? That which we call an unrest, by any other name would smell as rotten. Or would it?

Keen students of the news will remember that some news houses were portraying it as Zuma unrest, others were terming it a shutdown of SA, and some were using the curt, single term "unrest". For President Cyril Ramaphosa, the unrest has become a failed attempted insurrection. For his minister of defence, Nosiviwe Mapisa-Nqakula, it’s "a counterrevolution creeping in the form of criminality and thuggery".

These definitions become elliptical enough in headlines, but even more so in the inevitable hashtags, where getting people to agree on how they signpost stories is vitally important to generating views and amplification, and hashtags function as cashtags.

For some news houses, coverage started with #ZumaUnrest. As it became obvious that this was about much more than putting Jacob Zuma, the shattered Humpty Dumpty of state capture, back up on the wall, it morphed into #UnrestSA.

Humpty Dumpty is a fitting figurehead for the Twitter-egg avatars of radical egg transformation, as they fight to evade responsibility for corruption. In their world, words exist to be misused, and one of their central weapons is blatantly denying meaning.

The way the story is framed has consequences beyond just the way it ends up being told. Zuma’s attorney, for example, is arguing that the prosecution’s claims that the unrest began as protests against Zuma’s imprisonment have not been tested by any evidence. One hopes that digital forensics experts are tracing the inflammatory use of social media and building a case to prove that Zuma acolytes are, indeed, prime movers.

The current classic example of making words mean whatever you want them to is provided by Zuma’s lawyers arguing that a "virtual sitting is impermissible by law because it would amount to a trial in his absence".

This ploy has worked, at least initially, and Zuma has won yet another delay. His team must now explain why being live on video is not the same as being present at your trial. As a legal argument, it’s going to be tedious, but as a philosophical question it’s fascinating.

If you’re looking for a simplified blueprint of how this sort of strategy works, you could do worse than Through the Looking Glass, the sequel to Alice in Wonderland.

At one point, Alice and Humpty Dumpty discuss meaning:

Humpty Dumpty smiled contemptuously. "Of course you don’t — till I tell you. I meant ‘there’s a nice knock-down argument for you!’"

"When I use a word," Humpty Dumpty said, in rather a scornful tone, "it means just what I choose it to mean — neither more nor less."

"The question is," said Alice, "whether you can make words mean so many different things."

"The question is," said Humpty Dumpty, "which is to be master — that’s all."

A similar battle is being waged with hashtags, and what they’re being made to mean.

The hashtag, invented by Chris Messina on August 23 2007, was intended to make it easy for people to find relevant content, when they didn’t know how to specifically search for it. As such, it’s become a way to determine what content people find.

But it does more than that. It also becomes a way to make people think about something in a certain way, and to mobilise around that meaning.

Examples of this would be #BlackLivesMatter, or #MeToo. Further back, we had #ArabSpring, which spread awareness of anti-government protests in North Africa and the Middle East in 2011, or 2014’s #BringBackOurGirls, which raised awareness around the Boko Haram kidnapping of more than 200 schoolgirls in Chibok, Nigeria.

In effect, hashtags can become a weapon in what The Guardian columnist Nesrine Malik describes as culture wars — "aggressive political [action] with the purpose of creating new dividing lines and therefore new and bigger electoral majorities. It aims to create its own truth … through what Nietzsche called a ‘mobile army of metaphors’."

It’s not too fanciful to see the hashtags associated with the recent unrest/insurrection/thuggery/free Jacob Zuma events in SA as part of our ongoing disinformation wars, and via them we can trace the attacks and engagements of those wars.

Claiming that social media isn’t the real world is no longer a tenable position to hold. It’s a major part of what creates the real world.

Looting and lawlessness in SA have brought the political propagandists, populists and opportunists out into the open. We should publicly decry them, ...
Features
1 year ago

WILLIAM GUMEDE: After this crisis, SA needs something new

Last week’s mayhem was a violent end to the monopoly that the ANC has held over SA’s politics. It’s time for something new
Features
1 year ago

Investec CEO Fani Titi says many in the ANC still see business as the enemy. This hostility has to stop, since it is local investors that will have ...
Opinion
1 year ago

With such clowns at the helm, a foreign power wanting to disrupt the SA state could do so without blinking
Opinion
1 year ago

The psychological damage is deep: our entrepreneurs will invest cautiously, with fear and trepidation in their hearts
Opinion
1 year ago

Having played his trump card and lost, the former president is a spent force — and he’s still in jail
Opinion
1 year ago
Next Article