When Julius Malema took the oath as a parliamentarian, he swore to uphold SA’s laws. As Clicks burns, does he remember this? 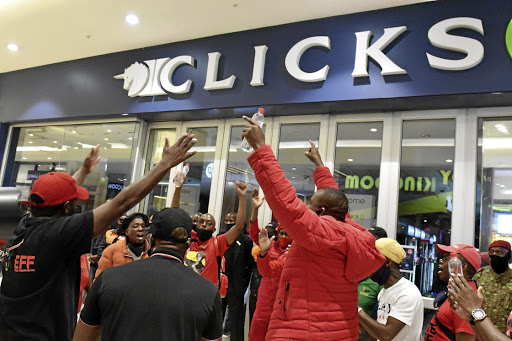 We must ask: is our constitutional democracy working? How is it that members of parliament, such as EFF leader Julius Malema, openly trash the constitution and trample on human rights, even though they swore to uphold the constitution?

The EFF was responding to a racist advert on Clicks’s website, which offended many black people and social justice advocates.

But the main stigmatised group in the advert are black women — and amid the noise, we haven’t heard much from them or from the pioneers of natural black hair products.

One exception is a video in which a few young black women, including my colleague Diane Gahiza, take a stand on the advert’s intersectional racism and gender bias.

We all have a responsibility and opportunity to consign to the dustbin of history the stigmatisation of blackness and exaltation of whiteness, which was a legalised injustice under colonialism and apartheid.

Clearly, the attitudes and habits of those policies remain with us — this can be invisible only to those who refuse to see it. As the saying goes, there are none is so blind as those who will not see.

How these continuities express themselves varies.

Rarely today do you get the openly racist statements you got from Eugene Terre’Blanche, or Chief Justice Frans Rumpff’s comment in 1980 that "coloureds and black men stab people … without any reason, except for an apparent lust of stabbing".

Nor do we get statements about black women such as when another court, in a rape case, said: "One cannot apply the same standard to Bantu women that one would ordinarily apply [to] a European woman."

Many understand bigotry differently. I understand it to range from unconscious bias to intentional racism.

Unconscious bias — whether it takes the form of racism, sexism, heterosexualism, xenophobia or ageism — isn’t motivated by a conscious intention to harm, demean or dehumanise. Still, while it may not plan to discriminate or harm, its actions may have this effect.

By not examining their unarticulated premises and the impact of their actions, even a well-intentioned person who acts on harmful stereotypes can foster the stigmatisation and exclusion of oppressed groups.

This is what, I believe, happened in the approval of the Clicks advert.

This incident isn’t simply a case of black hair — it’s an issue of equality as a foundation for social cohesion.

The constitution links social justice with democratic values and fundamental human rights as a way to heal divisions of the past.

Peace and equality are inseparable — as the architects of the Freedom Charter were clear about when they wrote: "Peace and friendship amongst all our people shall be secured by upholding the equal rights, opportunities and status of all."

So how do we make progress with regard to racism? I fundamentally differ with those who called for the action that led to the burning and closing of Clicks stores.

The EFF’s tactics are not only at odds with the constitutional responsibility of a party in parliament, they also demonstrate the party’s own paucity of business literacy. It is using a sledgehammer to swat a fly, without care for Clicks staff.

All our responses to racism and other social ills should be anchored in the constitution’s call to establish a society based on democratic values, social justice and fundamental human rights. For a parliamentarian, there shouldn’t be any other option.

When he took the parliamentary oath of office, Malema would have said that he swears to "be faithful to the Republic of SA and obey, respect and uphold the constitution and all other law of the republic".

So, is the EFF unheard and disempowered, for it to want to betray the constitution and the people by choosing a tactic that hurts the poor most? Doesn’t this suggest we need to reimagine our democracy?

While most of its peers have taken capital offshore, Clicks has quietly built its health and beauty business domestically, creating jobs and paying ...
Opinion
1 year ago

Fraser failed to properly file a bid to testify, says ...

Mbeki calls for more co-operation between state and ...