While most of its peers have taken capital offshore, Clicks has quietly built its health and beauty business domestically, creating jobs and paying its taxes 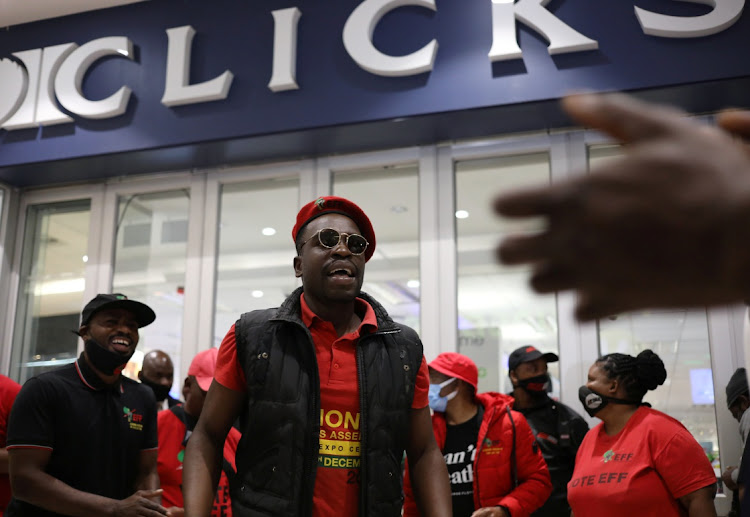 Members of the EFF protest outside a Clicks branch in Johannesburg. Picture: REUTERS/Siphiwe Sibeko

The irony of the EFF’s blockade of and arson attacks on Clicks stores over racism allegations is that the group is the only major JSE-listed retailer to not have divested from SA in recent years.

Instead of packing for Perth, Pennsylvania or Plymouth like most of its peer group, Clicks has focused all its growth efforts on the domestic environment. While most of its peers have taken capital offshore in the name of diversification from SA’s political and social risk, Clicks has quietly built its health and beauty business domestically, creating jobs and paying its taxes.

The firm has come under fire over an advert for hair products carried on its website which denigrated the hair of black people.

Clicks apologised, saying: “We have removed the images which go against everything we believe in. We do not condone racism and we are strong advocates of natural hair. We are deeply sorry and will put in place stricter measures on our website.”

Still, the EFF was having nothing of it. It prevented staff at several stores from getting to work and disrupted other commercial activities with a series of orchestrated mall invasions after an instruction from leader Julius Malema on social media: “Clicks, see you tomorrow. Fellow fighters and ground forces; ATTACK.”

The party used its social media accounts to promote its blockade, and showed Malema chaining the doors of a Polokwane store shut. The sporadic incidents of vandalism and arson were predictable. At the time of writing, there were reports of an EFF presence at nearly 40 of the group’s more than 800 stores countrywide.

Clicks stands out among its peers for several reasons. At the 2019 Sunday Times Top 100 Companies Awards last November, the three top-performing companies in terms of share price performance over five years were all firms with an exclusive focus on SA: Capitec, Clicks and Transaction Capital.

In sharp contrast to other retail groups which, under pressure from shareholders and boards, splurged billions on international ventures ostensibly to derisk their returns, Clicks stayed focused on serving the local market.

The fact is, few SA companies outside of the resources stocks have flourished internationally.

Naspers, SABMiller and Bidcorp are notable exceptions, but many others ventured into new environments at considerable cost of shareholders, only to return home (like Old Mutual and Standard Bank) to focus more on their core domestic competence.

In a recent research note, Anchor Capital estimated that SA companies’ failed foreign forays have destroyed more than R300bn over the past decade alone. The list is long, including Woolworths with its ill-fated R21bn purchase of David Jones in Australia, Brait with New Look in the UK, and Steinhoff with an impressive array of retailers from Britain to Eastern Europe.

Anchor Capital found several similarities when it came to these foreign investments. These included a propensity to overpay in markets where their domestic success has given them an inflated sense of their ability to turn around moribund businesses, and a false sense of security provided by the lower cost of capital in many markets.

There is no large, respected organisation that can deal out not only justice but also sense and enlightenment
Opinion
1 year ago