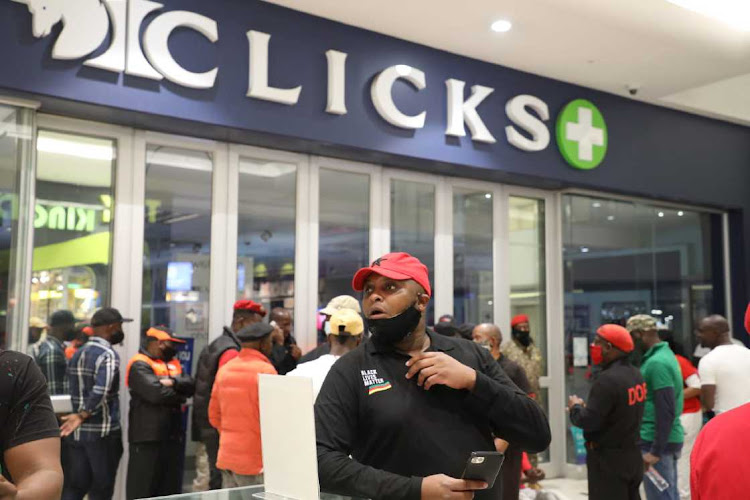 Clicks CEO Vikesh Ramsunder first saw the advertisement that caused all the trouble last Friday, as it began to attract heat on social media.

The contrasting images, created by Unilever’s Tresemmé brand and posted on the Clicks website, was of a white woman’s head with the description “normal hair” next to a black woman’s head, with “frizzy and dull hair”.

“Immediately, I saw it as racist,” Ramsunder tells the FM. “I told them: ‘There’s no way you can defend this — we’ve got it horribly wrong.’ It was really disappointing — I just couldn’t believe it had come from our organisation,” he tells the FM.

What mystified him, he says, is that the digital marketing team — two white people, two black people and a coloured manager — didn’t see the problem.

“I couldn’t believe they’d signed it off. I mean, we’re not an untransformed organisation, yet somehow we missed this as a team. I called a special board meeting for Sunday, and spent the weekend thinking what went wrong,” he says.

It’s what everyone has been asking. You’d think retailers would have learnt from the roasting H&M got in 2018, when it advertised a hooded jacket modelled by a black child bearing the phrase “Coolest monkey in the jungle”.

Thuli Madonsela, for one, calls it a “textbook case of unconscious bias”. Others were less generous.

Ramsunder has thought about this a lot. One answer is that Tresemmé has been sending marketing material to Clicks for years, so “maybe complacency crept in — the stuff gets routinely uploaded, and maybe we stopped asking questions. The oversight was obviously not strong enough.”

Tshegofatso Phetlhe, art director at M&C Saatchi Abel, says when she first saw the Clicks advert, “it just exhausted me”.

“It’s not even a case of the fact that they didn’t learn any lessons from the H&M issue, it’s that they clearly thought that diversity was just a trend that would disappear, not an ongoing conversation,” she tells the FM.

She says it should have been obvious to anyone that there was something wrong with the advert — the fact that it wasn’t, illustrates that the wrong people were in the room.

Most likely, she says, someone looked at the advert without thinking, and felt “this looks diverse”.

“At face value, it might have ticked the ‘diversity box’, but nobody really sat down and thought: ‘Is this substantively right ?’” she says.

Phetlhe is sceptical of Clicks’s promise of reform. “Unfortunately, I’ve seen it before: they’ll hire a diversity committee and pat themselves on the back, and then it’ll gradually disappear and we’ll end up back here in a few months.”

Ramsunder says this won’t happen: “We already do inclusivity training, but we have to do far more, continuously. And we have to rethink how we do this, so that people don’t feel racially isolated working here.”

Sarika Modi, who runs marketing agency Triple Eight, says her team — made up entirely of women — were particularly upset.

“Any person of colour would have immediately stopped and said: ‘This is not right.’ It has struck a chord now, because it was just one too many of the microaggressions that people of colour have to face,” she says.

Modi says it reveals the faultlines in advertising agencies too. “The bottom line is, Clicks didn’t review this properly. But marketing agencies also need to have more diversity in their leadership. It’s about maturity and sensitivity too — I don’t see how anyone attuned to the history of our country, and its racial sensitivities, would have done this.”

But then Julius Malema’s EFF seized upon the issue — and it all got so much worse. Malema and Mbuyiseni Ndlozi, both MPs, even called for an “attack” on Clicks.

Cue zero surprise when 15 stores were damaged, and the eMalahleni store was petrol-bombed. Ndlozi, illustrating a concomitant lack of ethical culpability, responded: “Perhaps Clicks petrol bombed itself in an attempt to influence the court ahead of its urgent application.”

Sure — or maybe Pravin Gordhan or Johann Rupert did it. This is the party of conspiracists which, while paying lip service to peaceful protest and human rights, chases away reporters it doesn’t like (from eNCA) and, when Madonsela argued that “anarchy and violence undermine the cause”, launched a series of brutal attacks on her personally.

As the DA’s Phumzile van Damme put it, according to the EFF’s thinking, “all Clicks workers must lose their jobs because of a stupid advert [they had] nothing to do with”.

As much as Phetlhe believes Clicks must be held accountable, she says the EFF hijacked the issue for its own political ends.

“Its message may be right, its militancy is wrong. Yes, there must be consequences, but the level of violence helps nobody. How does it help to go to a branch and abuse someone who probably earns R4,000 a month? You feel there’s another agenda at play,” she says.

Ramsunder understands the level of hurt, but says the EFF’s criminal behaviour is just unacceptable. “It’s extremely disappointing it took this route. We’re a democracy with laws, and you just can’t do this,” he says.

Still, some may say that it was only the EFF’s militancy that forced Clicks to take the matter seriously. Would this case not have been quietly shelved, amid soothing promises about “diversity training”, but for Malema’s threats?

No, says Ramsunder. “We wouldn’t have kept quiet about this. We were working on it over the weekend, before the EFF’s threats. We’re not learning anything new from the EFF damaging our stores,” he says.

The way Phetlhe sees it, if Clicks were to bow to pressure and fire someone, this wouldn’t fix anything. Rather, open up real conversations and build proper diversity.

“We must get to a stage where, even if there’s no black person in the room, somebody will look at an advert like this and say: ‘No — this mustn’t happen,’” she says.

Sowetan editor Nwabisa Makunga tells Tim Modise on @businessdaytv there’s no doubt the hair advert by Clicks was racist, but says the EFF’s protest actions must be interrogated.

While most of its peers have taken capital offshore, Clicks has quietly built its health and beauty business domestically, creating jobs and paying ...
Opinion
1 year ago

There is no large, respected organisation that can deal out not only justice but also sense and enlightenment
Opinion
1 year ago
Next Article