The visceral fear in July 2021 has seemed similarly intense to that of April 1993 – but objectively viewed, we were in a very different and more dangerous place then 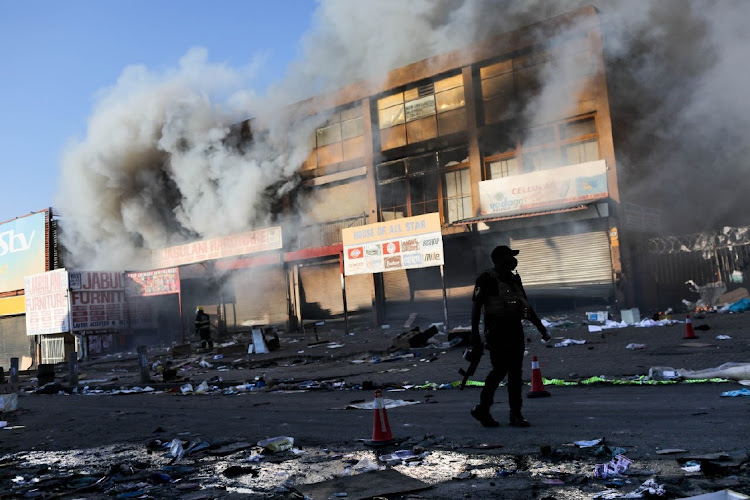 A police officer surveys the aftermath of the unrest. Picture: SIPHIWE SIBEKO

Saturday April 10 1993, Dawn Park, Boksburg: the assassination of the charismatic Chris Hani, leader of the SACP and said to be second only to Nelson Mandela in national popularity. That was the last time the country froze and held its breath, shocked and fearful, bracing for the worst.

What is this “worst” that we fear? Chaos; massacres driven by race hate; no food or medicine; the rule of law replaced by warlords and gangsters – indeed, the collapse of order into anarchy, a nightmare from which there is no return. And to paraphrase Ernest Hemingway (in The Sun Also Rises) on bankruptcy: revolution happens gradually – and then suddenly. For a few days last week, many thought it had arrived – some in KwaZulu-Natal (KZN) and Gauteng tasted it, and too suddenly for the state to give them any protection.

The visceral fear in July 2021 has seemed similarly intense to that of April 1993 – but objectively viewed, we were in a very different and more dangerous place then.

The National Party (NP) government of president FW de Klerk was still in office, but increasingly not in power. With every day that passed, more of its authority was draining away. The ANC, by contrast, wielded great power without any of the responsibilities of office – and many of its leaders were confident that they could take over government without negotiating a transition. Yet the NP still controlled the police, and the SA Defence Force.

Both sides were terrified of losing support in their constituencies by appearing to compromise with “the enemy”. As the NP’s foreign affairs minister, Pik Botha, put it to the FM earlier in 1993: “We as the NP are terrified of interim government by stealth. The ANC is terrified of co-option by stealth.” Neither side could afford to be seen to be negotiating – so instead of talks, there were “talks about talks”.

The Hani assassination jolted both sides into action. The following week, the FM wrote (under the headline “An injury to all”): “What has been heartening is the response of the ANC leadership. It is to be commended for setting out to channel the impotent rage into controllable public expression, while trying to douse the rhetoric of its romantic youthful revolutionaries. Above all, the ANC has argued that talks must continue … it perceives that there really is no alternative to talks.”

The assassination also created the moment at which the leadership of the country passed from De Klerk to Mandela, from white to black. It was Mandela who went on state-controlled television to call for calm. De Klerk at least had the grace to concede that he was no longer the de facto leader of the country. He did not see it in these terms, but the country knew it. Just over a year later, on May 10 1994, Mandela was inaugurated as president at the Union Buildings.

In 2021, with no help from the government, the reaction of ordinary South Africans has been extraordinarily inspiring and comforting. This time, they have a democracy and a constitution to defend. They have helped one another across class and race divisions, not least by literally joining hands in some communities to prevent further arson and looting. Whatever sympathy the jailed former president Jacob Zuma may have in KZN, its citizens have emphatically stated by their response that they will not go to war for him. They number in their millions, whereas the looters were at most a few thousand (and whether most of those cared about Zuma is highly debatable).

Yes, we have a lamentably weak state – but it has not been overthrown.

The FM commented in its April 16 1993 editorial that “the test of a leader is when to go with the tide, and when to strike out strongly against it”. We were referring to Mandela’s decision to urge restraint, when there were many louder voices calling for violent revenge. There was great political risk for him in that choice – but he did what was right for the country.

So far this century, the political tide has run strongly in favour of an ANC government dominated by thieves and incompetents. The reaction of the country to last week’s violence should finally give President Cyril Ramaphosa the confidence to strike out strongly and take the risks needed to turn the tide. He may not get another chance.

If the democratic alternative to the ANC’s failures cannot even be conceived of, then democracy itself is redundant
Opinion
11 months ago

BRYAN ROSTRON: ANC factionalism spills over into another uncivil war in the police

The sequence of last week’s violent incidents suggests a co-ordinated assault on SA’s logistics value chain. But members of the government are not ...
Opinion
11 months ago
Next Article

Looting cripples one in 10 Shoprite supermarkets

Looting cripples one in 10 Shoprite supermarkets