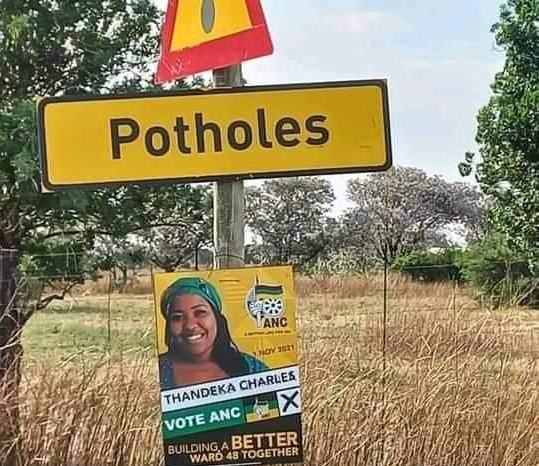 You have to feel for Thandeka Charles. This past week, the wannabe ward councillor became the literal poster child for the ANC’s service delivery failure when a picture of her campaign ad, placed under a road sign warning of potholes, did the rounds on social media.

There’s a serendipitous similitude in the gold tones of the pothole warning and the poster background. Or, as ANC elections head Fikile Mbalula would say: “It’s colours, guys! Nice colours!”

Adding to the irony is that Charles is standing for election in ward 48 of Mangaung – a scant 15km or so from where officials were furiously filling potholes on the weekend and clearing dumping sites ahead of President Cyril Ramaphosa’s visit to the metro on Monday, OFM’s Olebogeng Motse reports. Bet my bottom dollar they were earning overtime, on the taxpayer’s dime.

Over in ward 47, to the east of the CBD, there’s an informal settlement called Gatvol (yes, really). There, the residents of about 600 shacks share four taps – one of them connected illegally to the water supply at a nearby warehouse, the Sowetan’s Lindile Sifile reported in May. Residents, he wrote, mostly dig their own pit latrines. And on his visit, at least, raw sewage was spilling over from a nearby manhole, oozing into yards in the settlement. The Sunday Times’s Graeme Hosken and Iavan Pijoos reported similar decay throughout the metro during service delivery protests in May: sewage, litter, potholes, stench. A bakkie – uniformed schoolgirl on the back – stuck in the mud of a sewage spill.

The state of the city

For years, Mangaung’s governance has been red-flagged. In a qualified audit for 2018/2019, for example, the auditor-general (AG) warned of a lack of accountability and preventative controls in the metro. Unspent conditional grants – for things like urban settlements, disaster recovery and public transport – were channelled into operational activities, and more than R1bn was blown on unauthorised expenditure, including through overspending on salaries and overtime.

But despite being under administration since 2019, little seems to have changed, particularly from an accountability perspective.

Take the recent farce around the introduction of a metro police force for Mangaung. Despite repeated warnings by the National Treasury not to go ahead with the plan, the council did so anyway.

Then, amid concerns about funding, due process and the suitability of recruits (it’s claimed some have criminal records; the metro denies this) – and with shiny, newly branded metro cop cars already on the streets – the council hit pause and deferred the “glitzy” launch. At which point the city’s fearless law enforcers barricaded entrances to the 13-storey municipal administration building, demanding their letters of appointment.

The entire project has now been dissolved on the instruction of the Treasury and Deputy President David Mabuza, and at a national level there’s at least a notional calling to account. But the whole palaver has already cost taxpayers about R250m, the DA has told News24.

The cynicism of politics

The hapless Thandeka Charles will have been among the 10,000-odd council candidates the ANC rolled out on Tuesday night for the party’s inaugural “roll call” – a collection of virtual events around the country in which candidates pledged themselves to honesty, integrity and dedication. Because such values can’t be taken for granted in SA’s public service.

Even a promise is not enough: cheerleader Mbalula was on hand to remind candidates that each pledge is a legally binding document.

Speaking from the Alberton Civic Centre, Ramaphosa proclaimed that the candidates were promising “to take nothing from the people of our country … to accept no inducement, commit no fraud, disavow any form of nepotism and patronage, as well as to respect the women and the girls of our country”.

Really? I promise not to steal from the people I serve, not to accept bribes, or behave criminally; I won’t give jobs to my friends and family. Oh, and I’ll treat women right.

I’m not sure what’s more astounding: that the ANC saw it necessary to elicit these promises from prospective public servants, or that the party thought this would make good PR.

Sure, Ramaphosa is trying to show that this is a “new” ANC – one that will “do better and be better”. In his address, he made assurances that the party is changing: it’s making progress in the fight against corruption; has undertaken “mass public employment programmes”; is starting to turn around the country’s ailing state-owned enterprises. But these ring hollow, given the reality on the ground – the looting that has continued on his watch, for example, or the ballooning unemployment rate (now 44% on the expanded definition).

It’s so cynically convenient to pitch a “new” ANC against an “old” one, where the sins of the past can be parcelled off on the bogeymen of Jacob Zuma and Ace Magashule. It feels like such a craven plea for support.

“Our towns are dirty and filthy right now,” Ramaphosa said on Tuesday. “These candidates, when elected as councillors, are going to clean up. That is the instruction that I am issuing today.”

If it were that simple, it’s a pity it didn’t occur to Ramaphosa to issue the instruction when he took the reins of the party in late 2017. Or when, as deputy president, he sat at Zuma’s right hand.

With the ANC in full campaign mode, the actual business of running the country has ground to a halt
Opinion
7 months ago

If we ignore the rule of law by letting off Jacob Zuma and the hostage takers, our country will be in danger
Opinion
7 months ago

Ramaphosa has been busy on the campaign trail, but his tired smile can’t hide the fact that the ANC’s leadership track record at municipal level is ...
Opinion
7 months ago
Next Article