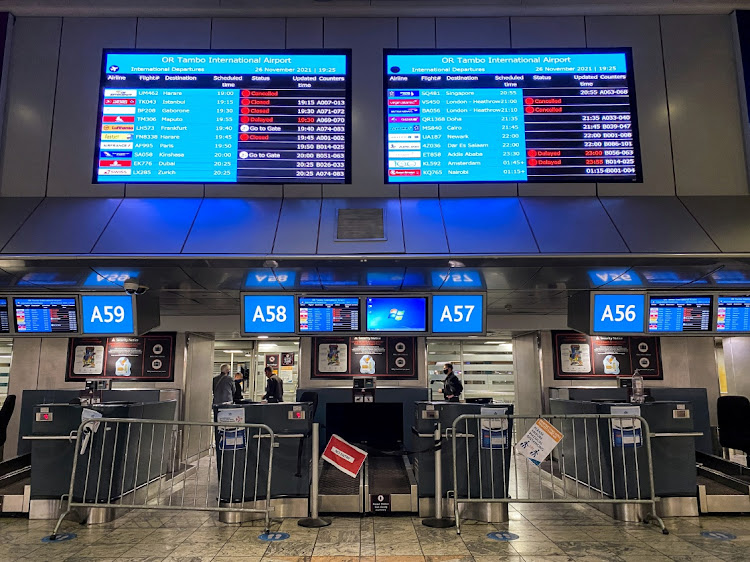 The government is trying to persuade countries that have  implemented travel bans from Southern Africa over the discovery of a new Covid-19 variant to reconsider their actions.

The latest restrictions, some implemented less than a day after local authorities confirmed the new variant, were “akin to punishing SA for its advanced genomic sequencing and the ability to detect new variants quicker”, the department of international relations & co-operation said in a statement on Saturday.

The World Health Organization (WHO) has classified Omicron, initially known as B.1.1.529, as a variant of concern as it might be more transmissible, more severe, or decrease the effectiveness of built-up immunity or vaccines.

“This variant has a large number of mutations, some of which are concerning,” the WHO said in a statement. “Preliminary evidence suggests an increased risk of reinfection with this variant…”

Due to the limited data available at this stage, the WHO called on countries to conduct further tests to determine Omicron’s “severity, effectiveness of public health and social measures, diagnostic methods, immune responses, antibody neutralisation”, among other things.

But during a briefing on Friday night, local health officials said there were indications that vaccines were effective against Omicron.

“We have additional people hospitalised, but the overall impression is that the ratio of unvaccinated to vaccinated is 4:1 at this time,” member of the ministerial advisory committee Prof Ian Sanne told the briefing. “People should still go out and get vaccinated.”

Health minister Joe Phaahla, who referred to the restrictions as “draconian” during Friday’s briefing, questioned the sense of the responses, especially by countries with daily rates significantly higher than SA’s. He suggested SA was being “punished” for its transparency, and said countries should instead co-operate as recommended by the WHO.

The department of international relations also said Omicron had been detected in other countries with no links to Southern Africa, while no bans were implemented.

Minister of international relations Naledi Pandor said the government’s “immediate concern is the damage that these restrictions are causing to families, the travel and tourism industries and business”.

A number of local tourism bodies condemned the bans. The Southern Africa Tourism Services Association (Satsa), representing over 1,300 businesses, described the UK’s ban as “devastating for the tourism industry” as travellers were forced to cancel their trips.

Meanwhile, the JSE fell the most since October 2020 amid global sell-offs, Business Day reported on Friday. Travel and leisure stocks were down 9.1% while the rand dropped to R16.36/$

Shortly after a number of European countries announced travel bans, reports emerged of travellers stranded on their flights at Schiphol airport in Amsterdam. Dutch authorities have since said 61 travellers from SA had tested positive for Covid-19, but that further tests were being done to determine if they were infected with Omicron.

The UK government said British Prime Minister Boris Johnson discussed the restrictions with President Cyril Ramaphosa on Friday to find ways to deal with the potential risks posed by the new variant and resume travel.

Correction: November 28 2021
Prof Ian Sanne was misquoted as saying the ratio of people hospitalised for Covid-19 was 4:1 vaccinated against unvaccinated. It is the opposite.

The meeting had been scheduled for Sunday amid rapidly increasing Covid-19 cases across the country, particularly in Gauteng
National
1 month ago

SA has said that the travel ban is unjustified, and Britain did not engage with the country before introducing the flight ban
National
1 month ago

Global authorities reacted with alarm on Friday to a new coronavirus variant detected in SA, with the EU and Britain among those tightening border ...
World
1 month ago
Next Article