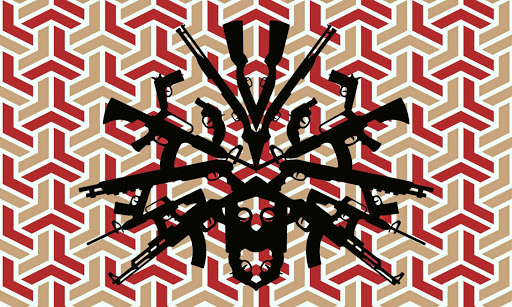 They’re billing it as the Gucci Revolutionaries vs the K-Way Militia. It’s a battle to the death between the huffing ground forces of the EFF and the puffing k(r)appie kommandos of AfriForum and the alt-white right.

And by "to the death", I don’t mean their deaths. No, those who will feel the effects of their incitement to violence will be the ordinary people, both active participants and the inevitable bystanders — collateral damage in the contest to see who can tweet the biggest swinging dick metaphor. The only death our heroes risk is having their social media accounts suspended for hate speech.

Yes, these defenders of the people and their supporters (actual definition of "people" may vary, not to mention "defenders") are tweeting pictures of rifles and threats of violence in the context of the killing of young farm manager Brendin Horner and protest action by "agricultural leaders and community members" at the courthouse in Senekal.

Last week, demonstrators stormed the courthouse, and a police vehicle was set alight. One of the demonstrators has been arrested and charged with malicious damage to property and public violence.

It’s the SA equivalent of Pop Idol, where "pop" is short for populist and "idol" is a corruption of "idiot". As the DA’s Phumzile van Damme tweeted: "Extreme left, extreme right. Same WhatsApp group."

Both parties are playing the same game, posturing for profit and pushing violence, that Viagra for the revolutionary who can’t get it up any other way.

EFF leader Julius Malema tweeted a picture of an AK-47, and followed it up with the injunction: "Since the government of Cyril Ramaphosa is extremely scared to respond decisively, we are on our own. Next appearance, all ground forces and peace loving South Africans will be in attendance, in defence of our democracy and property. Magwala a chechele morago! Fighters attack!"

One of his henchmen, MP Nazier Paulsen — member of the EFF central command team and guy in charge of fish for the EFF — tweeted a video of (presumably) himself firing various firearms from a balcony, as well as a separate firearm pic and the caption: "Get ready."

The ostentatious display of weapons isn’t a new thing, and you’ll find a liberal sprinkling of firearm pics on the social media streams of the alt-white bros as well, echoing the right-wing Americans they so desperately long to be.

What is it with the conservatives and their worship of the US? Do they think that watching a bunch of superhero movies qualifies them to be American?

AfriForum’s Ernst Roets even ran a poll recently, asking his followers which presidential candidate they’d choose if they were American.

The EFF is the most egregious offender, and the alt-white bros are way more circumspect about the captions they append to their strutting firearm mating displays. But Twitter users have dredged up a 2018 pic of Roets engaging in "target practice", which DA interim leader John Steenhuisen liked and commented on approvingly, in an effort to link the DA to the same scenario.

My reference to the reality TV show Pop Idol isn’t frivolous. In a recent London Review of Books piece titled "Who am I Prepared to Kill?", William Davies writes about "the tyranny of binary opinion" on the internet. He describes how we have become "a society of perpetual referendums", and how "the passionately positive and the passionately negative can usually be relied on to take part".

Because nuance has fallen out of favour, and politicians and organisations driven by single-cause logic pursue real-time audience acclaim in the forms of likes and retweets, populists tend towards the same strategies and issues.

Davies’ account of how this works in the entertainment world is amusing, and this is basically what our populist parties are: the dancing fools of reality TV.

"Talent shows are evidence of what happens when the plebiscitary form is extended to entertainment: singing and dancing become contests, tests of vocal and bodily agility, that eventually result in everyone straining for the same sound, look and appearance. Platforms such as Twitter and Instagram have a similar effect on the presentation of the self, where the goal is to win plaudits for instantly impressive slogans and iconography."

So when the Gucci Revolutionaries and the K-Way Militia compare red rompers with Cape Union Mart camo, or compete to see whose weapon is sexier, they’re two sides of the same debased currency.

And "once history itself becomes a matter of plebiscitary decision, we are assigned to cultural camps that we had no hand in designing, and whose main virtue is that the other camp is even worse".

Senekal, the small Free State town near the farm where Horner was murdered, is named after Boer commander Frederik Senekal, who was killed in the Basotho War in 1865.

The monument to commandant Senekal is inscribed with the words, "Dit is soet om vir die vaderland te sterf" (It is sweet to die for the fatherland). It’s the sort of rhetoric that many supporters of AfriForum and their ilk articulate.

Equally, the EFF claims a legacy of revolutionary action that relies on a limited, skewed version of history.

The Wikipedia list of notable people born in Senekal includes one "Louw Gertenbach, the biggest hunter in Africa. There is a rumour that he shot eight lions with his kettie when the lions attacked his slave."

The person who uploaded this information has made no attempt to contextualise slave-owning, or defend their choice of a slave owner as a notable historical figure.

It’s a curious blindness that is reflected in a tweet by one of the conservative demonstrators at a related protest, making fun of the EFF’s "ground forces". "The EFF did actually pitch up at today’s protest in Bronkhorstspruit. There were four of them and about 1,000 of us. They didn’t want to fight. One of the red hats even asked a few farmers if they had a job for him!"

In the world of populist polarisation, there is no room for a nuanced understanding of how poverty and gross inequality are drivers of the very murders against which they’re protesting, and of how ridiculing unemployed people is no way to heal divisions.

This example comes from the alt-white right, but they’re not the only offenders.

Ramaphosa said the following: "What happened in Senekal shows just how easily the tinderbox of race hatred can be ignited. As a nation we must resist any attempts to use crime on farms to mobilise communities along racial lines."

I think we’re all pretty much confident that the EFF and AfriForum, and their associated parasites, will ignore this plea with disdain. But we don’t have to buy into the Gucci Revolutionaries/K-Way Militia divide that they’re trying to convince us is the only way to think about these issues.

To echo Van Damme: "We must hold the moderate centre. It cannot be that our country is held to ransom by extremists of any kind."

As the US toppling of a statue of Iraqi dictator Saddam Hussein shows, removing monuments to a troubled past doesn’t take away the results of its ...
Features
11 months ago

Much of the EFF’s original impetus came from its battles against Jacob Zuma. More recently, it’s a toxic narcissism that has kept it in the public ...
Features
1 year ago

The road to anarchy

There are parallels between the events of a new book on the 2016 murder of two men outside Parys and the EFF’s increasingly violent rhetoric. Both ...
Features
1 year ago
Next Article

MARK BARNES: Give credit where it is due, and ignore ...