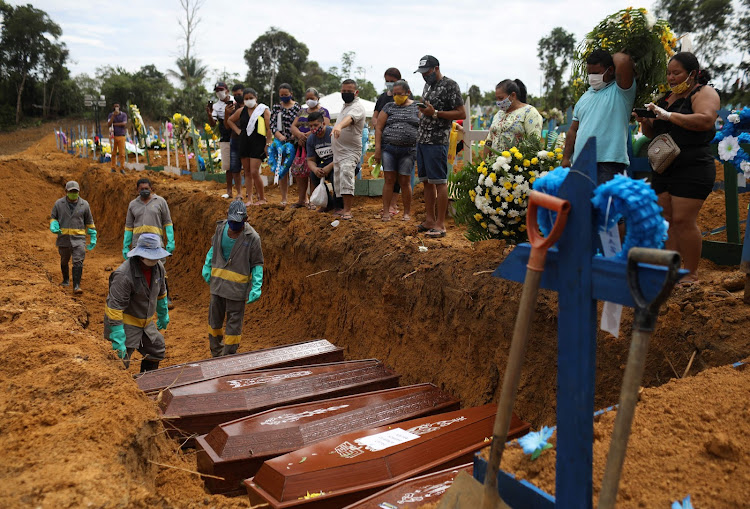 People struggling to breathe needed ventilators, he said, but there were not enough to go around; those with a slim chance of recovery were passed over.

“Every shift it was like that,” said Archer, a surgeon at a municipal hospital in Rio de Janeiro, a metropolis of 6.7-million people anchoring a state of the same name. “Sometimes, I would give them sedatives just so that they didn’t suffer. Eventually, they would pass away.”

Some of those deaths, state and federal prosecutors now say, may have been avoidable. They allege that top officials here sought to pocket up to 400-million reais ($72.2m) via corruption schemes that steered inflated state contracts to allies during the pandemic. The deals, they said, included three contracts for 1,000 ventilators, most of which never arrived.

Rio state health secretary Edmar Santos was arrested on July 10 and charged with corruption in connection with those contracts. A lawyer for Santos did not respond to a request for comment. Santos admitted to participating in various illicit schemes involving rigged public tenders, according to confidential court documents prepared by federal investigators laying out the alleged scams, which were reviewed by Reuters. He is now a co-operating witness in the probe, the documents said.

Separately, a federal judge suspended Rio state governor Wilson Witzel from office on August 28 out of concern that he might interfere with the investigations. Witzel is also facing impeachment proceedings over alleged graft.

He has denied wrongdoing. Vice-governor Cláudio Castro, who took over for Witzel in August, did not respond to a request for comment.

When Rio received a small batch of the ventilators from the company at the end of March, hospital workers complained to the SES that the machines lacked key components

Latin America has been hit hard by the pandemic, with over 8.9-million confirmed coronavirus cases as of September 24. Brazil alone has registered more than 139,000 Covid-19 deaths, second only to the US.

If the city of Rio were a country, its per capita mortality rate from the coronavirus would rank as the world’s worst, according to a Reuters calculation based on Johns Hopkins University data. More than 10,000 people have died from Covid-19 in this postcard city of sea and sand, and more than 18,000 statewide.

The region’s response to the pandemic has been hobbled by various factors, experts say, including poverty and crowded urban living conditions. Some leaders, including Brazil’s right-wing President Jair Bolsonaro, have played down the pandemic’s severity.

But the virus has also been aided by greed.

Similar to Brazil, investigators in Bolivia, Ecuador, Colombia and Peru have likewise alleged that officials there lined their pockets through pandemic-related graft schemes.

In court documents detailing the alleged scams in Rio, Brazilian prosecutors describe a series of inter-related criminal enterprises, in which emergency contracts for masks, coronavirus tests — even hand gel — were allegedly rigged.

Reuters reviewed hundreds of pages of prosecutors’ allegations, many confidential and not previously reported; and it interviewed more than a dozen medical professionals and good-government experts who condemned the opportunism they say has compounded coronavirus misery in Rio.

“The pandemic allowed governments to spend significant resources very quickly while internal controls were relaxed due to the emergency,” said Guilherme France, research director for Transparency International in Brazil. “It ended up creating a perfect storm for corruption.”

A representative of Witzel said the suspended governor increased internal controls in the Rio state government, adding that he had fired many public servants accused of “irregularities” during his time in power.

Rio state’s pandemic response called for seven field hospitals to treat Covid-19 patients. Officials at the state health ministry (SES), awarded contracts worth 836-million reais ($151m) to a non-profit health organisation named Iabas to build the structures, which were to open by April 30. Just two have  opened so far, one in mid-May, the other in late June, well after the initial Covid-19 surge.

In late July, as the pandemic eased in Rio, one of those structures located in the working-class city of São Gonçalo was dismantled amid a lack of patients. All that remains is a large field, stripped of grass and littered with debris.

Iabas contracts are part of an alleged kickback racket spearheaded by Mário Peixoto, a local entrepreneur arrested in May for reputedly defrauding the Rio state health system. Federal court documents submitted by prosecutors describe a complex scheme in which associates of Peixoto allegedly arranged for bribes to be routed to government officials to secure a variety of public health contracts, including the field hospitals.

Lawyers for Peixoto said he is innocent and did not participate in the field hospital deal. His trial is pending.

Federal prosecutors have not charged Iabas, but in confidential court documents they filed asking a judge to authorise the arrest of additional suspects, they said there was no “room for doubt” that Iabas’s winning bid was tainted by graft. Among the various irregularities cited by prosecutors: Iabas drafted its winning proposal before the SES solicited offers.

Iabas said it won the hospital contracts by offering the lowest price. It said the SES made frequent changes to the agreement, which slowed construction. Iabas said six of the seven structures were either completed or nearly finished in early June, when Rio state canceled its contract and took control of all the project sites.

In a statement to Reuters, the SES disputed Iabas’s characterisation of the progress it had made. It said four of the seven field hospitals were far from complete when the state took over.

The SES declined to comment on Iabas’s allegation that the health ministry made frequent changes to the construction agreement. The SES said it had saved more than 500-million reais by suspending payments to Iabas following the corruption allegations made by prosecutors. The ministry said it is co-operating with the investigation.

Prosecutors say Rio’s state government also rushed out ventilator contracts to three companies that had little or no relevant experience.

According to court documents summarising prosecutors’ findings, on March 21, Rio awarded a little-known firm, Arc Fontoura, a contract worth 68-million reais to provide 400 ventilators for immediate delivery. State auditors have since determined Rio’s health ministry paid a nearly 200% mark-up from the market price.

Arc Fontoura had not previously contracted with the state, and tax documents indicated the firm’s annual revenue was no more than 4.8-million reais, prosecutors said. The company’s registered address, Reuters found, is a small residence in a working-class part of the city.

When Rio received a small batch of the ventilators from the company at the end of March, hospital workers complained to the SES that the machines lacked key components, prosecutors said in the court documents summarising their findings. The documents did not make clear in which hospital the health workers were stationed.

Arc Fontoura did not respond to calls or e-mails or receive Reuters at its listed address.

On April 1, the SES awarded contracts worth a combined 116-million reais to two other firms — MHS Produtos e Servicos and A2A Comercio — to supply 300 ventilators each.

Rio prosecutors quickly identified irregularities, according to court documents, starting with the timing of the companies’ bids.  The little-known enterprises submitted its proposals less than an hour after the SES opened the tender, which was not advertised beforehand, a sign the firms had been tipped off, prosecutors said.

By May 8, Rio’s state health department said publicly that of the 1,000 ventilators it had ordered, just 52 had been delivered, all from Arc Fontoura. The SES said in early May it had canceled its contract with A2A because of “the company’s inability to deliver” the ventilators. A2A did not respond to requests for comment.

MHS owner Glauco Guerra  denied wrongdoing. He said in an e-mail that his company had significant experience providing services to federal agencies. He said he submitted his bid a day after the tender was opened, not within a few hours, as prosecutors had alleged. Guerra said the SES entered his bid documents into its computer system in a way that led prosecutors to misinterpret the timeline.

He said 97 ventilators were delivered to the SES on June 6, and that the agency later canceled the contract for the remainder. State prosecutors confirmed in public documents seen by Reuters that 97 ventilators ordered by MHS had arrived at a Rio airport in early June.

The SES said in a statement to Reuters that all contracts signed “during the pandemic are being audited and revised”, adding that any irregularities will be punished. The ministry declined to comment on  MHS’s claim that its bid documents were entered into the SES system in a misleading fashion, citing ongoing investigations into the matter.

Archer, the surgeon, said his experience battling Covid-19 without enough ventilators has left him bitter. During the peak of the pandemic in April and May, he said as many as 30 patients in his care were waiting for the machines. Many were too unstable to move to hospitals elsewhere and ultimately died, he said.

How many patients could have been saved, Archer wondered. How many did corruption kill? “It’s very difficult to accept things you know are wrong.”

The nightmare scenario some feared would come to pass in Syria or India appears to be unfolding in Brazil, which is becoming the new epicentre
World
1 year ago
Next Article

The ‘coronavoucher’ has pushed Brazil’s poverty to record lows

Brazil GDP plummeted 9.7% in second quarter due to Covid-19

The ‘coronavoucher’ has pushed Brazil’s poverty to record lows

Brazil GDP plummeted 9.7% in second quarter due to Covid-19