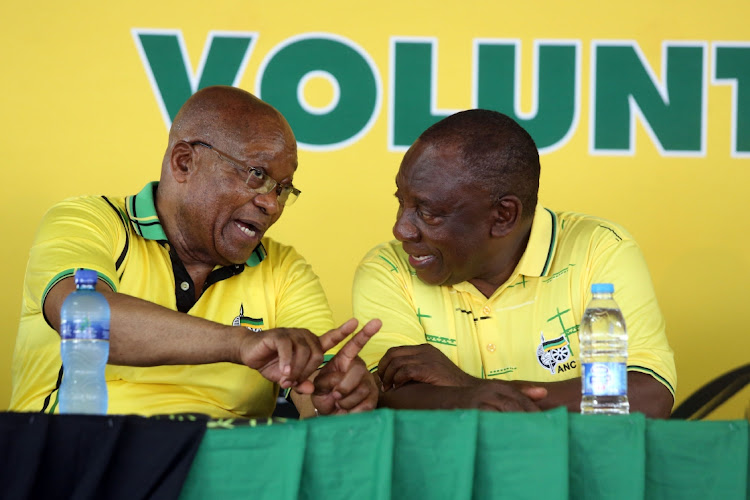 President Cyril Ramaphosa knew about, and in fact gave the green light for, the release of former president Jacob Zuma on medical parole.

This is according to the City Press this weekend, which reported that Ramaphosa had given Zuma loyalist and prisons boss Arthur Fraser the go-ahead to release Zuma on medical parole.

Fraser, who was Zuma’s bagman in the State Security Agency during his near-decade-long ruinous presidency, released Zuma against the advice of the medical parole advisory board, which found that the former president was in a stable condition.

According to sources quoted by the newspaper, Zuma’s release was part of the plan “all along”, which was decided “long before”.

If true – and Ramaphosa has not denied the reports – there are serious implications for the country, the application of the rule of law and the notion that everyone is equal before the law. It also means that Ramaphosa is more similar to his predecessor than thought, in placing the needs of the ANC above the integrity of the country and its constitutional order.

It is important here to return to the reason Zuma was jailed – his flagrant disregard of a judgment by the Constitutional Court, which compelled him to appear before the state capture commission of inquiry, cannot be ignored.

Ramaphosa agreeing to Zuma’s release after his conduct toward the apex court erodes his reputation as a constitutionalist.

It is clear that the ANC would have suffered considerable electoral losses in KwaZulu-Natal because of Zuma’s jailing, and there is no way to tell whether his release will undo the damage already done to the party in the province. But this was clearly top of mind when the decision was taken and agreed to – the ANC in KwaZulu-Natal had long warned of the implications of Zuma’s jailing for the party and expressed relief after news of his release on medical parole last week.

The ANC’s tip-toeing around Zuma, who destroyed the economy and crippled key institutions during his presidency, shows that reform remains a long shot for the party, still very much enmeshed in the toxic politics that emerged in the Zuma years. It remains packed to the hilt with Zuma enablers and is unlikely to change as long as the status quo remains. One of these enablers, current chair and former secretary-general Gwede Mantashe, this weekend said that to bring about true change, the ANC must be rid of all those accused of corruption –  both “flies and tigers”. Delivering an SACP lecture on Saturday, Mantashe said the ANC was beginning to deal with the big guns accused of corruption in its ranks to rid the party of corruption and factionalism.

Fine words when the alleged thief-in-chief is given special treatment at every turn.

Zuma’s release on medical parole is already being challenged in court by the DA and may also be challenged by the Helen Suzman Foundation, which has given Fraser until today to provide reasons for his decision to approve Zuma’s release.

Outside of the ANC’s electoral prospects, there is some personal gain to be had by Ramaphosa for treating Zuma with kid gloves. KwaZulu-Natal is a critical province in internal ANC dynamics; it brought the largest voting bloc of delegates to the party’s last conference. Ramaphosa was criticised by the ANC leadership in KwaZulu-Natal for his characterisation of the unrest in that province in July after Zuma’s arrest as an “ethnic mobilisation”.

Ramaphosa is set to face re-election for a second term at the helm of the party at its next elective conference in December 2022. Politically, alienating the province could pose a risk to his re-election prospects. Agreeing to Zuma’s medical parole could go a long way to ease the tempers of provincial power brokers, though it is not entirely impossible for a challenge to Ramaphosa to emerge from the province, perhaps even in the form of his former health minister Zweli Mkhize, who resigned after being embroiled in a corruption scandal involving a R150m communication contract to his close associates from which his family had benefited.

Still, Ramaphosa’s second term prospects are good -- what he does with that second term is what will count in the long run.

Growing the economy is crucial and SA took a tenuous step forward on Sunday night with Ramaphosa announcing a shift to a level 2 lockdown, which means an easing of restrictions on alcohol sales and a later curfew. The lifting of the restrictions is mainly to enable the ease of movement and gathering ahead of the local government elections on November 1.

Marrian is deputy editor of the FM

Since taking the reins of the ANC and the country, Cyril Ramaphosa has consolidated his position. But the momentum of his early gains has waned, and ...
Features
8 months ago

Does Ramaphosa approve of politicians bending the rules to suit themselves — or is he just willing to overlook it?
Opinion
8 months ago

A naked statement that Zuma was released after the government received a 'medical report' was never going to fly. To assuage the justifiable ...
Opinion
8 months ago

JUSTICE MALALA: Why did Cyril not shoot the deputies?

JUSTICE MALALA: Why did Cyril not shoot the deputies?