Journalist who appears to have a source in the NPA made an inquiry and broke the story, lawyer says in affidavit 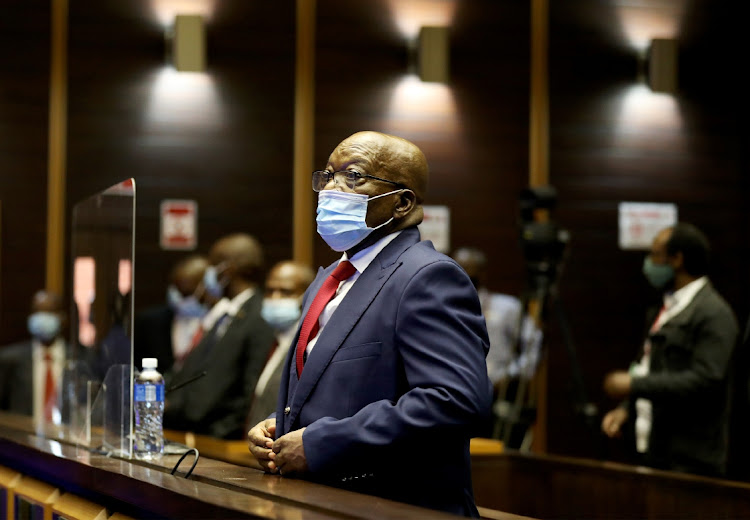 The state leaked former president Jacob Zuma’s medical records and brought in a specialist to examine him on the sly, the lawyer for Zuma has said in an affidavit.

Zuma’s attorney Bethuel Thusini filed the affidavit ahead of Thursday’s virtual hearing before Pietermaritzburg high court judge Piet Koen when the case against Zuma and French arms company Thales was adjourned until later this month.

The state has been given until September 16 to file its response to the latest allegations.

Zuma wants state prosecutor Billy Downer and all National Prosecuting Authority (NPA) advocates off the case‚ arguing they are biased. His trial‚ when it eventually begins‚ will kick off with his “special plea” in terms of the Criminal Procedure Act during which Zuma has indicated he wishes to give oral evidence.

Thusini has made an application to admit further evidence during the hearing of the plea. He said this will show that Downer had more recently been implicated in further acts of “alleged serious misconduct” that support Zuma’s bid for his disqualification from prosecuting him.

He said the court should take note of the fact that Zuma was released from custody on medical parole on September 5 because of his deteriorating health. He remains in a private specialist hospital until his doctors deem it medically appropriate to discharge him.

At the last hearing, in August‚ Zuma’s legal team presented a doctor’s report from Brig-Gen Dr Mcebisi Zukile Mdutywa from the defence department’s Military Health Services‚ which read he was undergoing an extensive medical evaluation for an emergency procedure that carried a “significant risk to life”‚ and it could take six months before he recovers.

Koen ordered‚ by consent‚ that Zuma’s legal team file a more comprehensive report by August 20. After that the state‚ if it wishes to‚ could get its own experts on board and examine him. However‚ the filing of the medical report was delayed by a week. The complaint is that Downer jumped the gun and wanted access to Zuma’s medical records and his specialist to examine him before the comprehensive medical report.

This‚ Thusini said‚ shows Downer had already formed an opinion that Zuma was “feigning his own sickness” and it was contrary to the court order.

Thusini said Zuma alleges two recent specific acts of misconduct against Downer “aided and abetted or enabled by the NPA” that demonstrate a continuous pattern designed to mire Zuma’s prosecution “with the effect that he is treated as if he is guilty of the crimes without leading any evidence”. One‚ he said‚ was the deliberate leaking of Zuma’s medical report to the media.

This was coupled with the NPA’s stance on the medical report — indicating that he was feigning sickness — which was a grave violation of Zuma’s constitutional rights. This was borne out by the NPA’s refusal to agree to a postponement, which was sought on the basis of a summarised preliminary medical report‚ in the form of a confidential letter‚ by medical doctors employed by the Military Health Services.

Thusini said on August 9 that Downer “strangely” filed an unsolicited affidavit in which he disclosed and annexed the confidential medical report‚ before Zuma’s application for the postponement had been filed.

“While preparing our application‚ an inquiry was made by a journalist who appeared to have a source in the NPA and who broke the story of the medical report and‚ to our utter shock and surprise‚ referred to its contents in such a way that it was abundantly clear the journalist had read or had been advised of its contents.”

Thusini said this was despite pleas by Zuma’s legal team to treat the report with the strictest confidentiality.

There was no evidence to support Downer’s view that Zuma‚ either alone or in cahoots with the state doctors‚ was intent on subverting the interests of justice‚ he said.

“This is a serious allegation. We have come to accept such insults from the biased media‚ but it cannot be countenanced from an organ of state. The leaking of the medical letter was reported to the president in a complaint filed with him and copied to the National Director of Public Prosecutions (NDPP) and the minister of justice.

“The president has since informed us that he has directed a full investigation to be conducted‚” he said.

To “add insult to injury”‚ without any legal basis‚ Downer sent a private doctor‚ Prof Andrew Sarkin‚ accompanied by a police investigator‚ one Col Du Plooy‚ to the private hospital to conduct an illegal medical examination of Zuma.

Thusini said this was in breach of Koen’s previous order that read the state could get its own doctors to examine him‚ but only after a detailed medical report had been given to the NPA for it to formulate an opinion.

“The fact that Downer and his prosecutors will not believe the word of state doctors unless the medical report is checked by Prof Sarkin‚ who has never treated Zuma‚ is a telling indication of the underlying prejudice and undermining of Zuma‚ his medical team and possibly his lawyers.

“It has never been made clear to Zuma who Prof Sarkin is‚ and why he was specifically chosen for this medical mission.”

Thusini has attached his complaint to President Cyril Ramaphosa and Ramaphosa’s response‚ in which he states: “We take note of the serious misconduct you make in your letter and we view these allegations in a serious light.”

Ramaphosa said the matter has been referred to the minister of justice and correctional services‚ who has final responsibility over the NPA‚ who in turn‚ has been asked to refer the matter to the Legal Practice Council.

In correspondence from the NPA to Mdutywa‚ also attached to the application‚ the NPA states it has appointed Sarkin‚ a cardiologist and specialist physician with more than 30 years’ experience‚ to examine Zuma with a view to determining his fitness to attend court and stand trial. Two dates were proposed: August 24 or 25.

“The correspondence notes that Prof Gert Saayman‚ chief state pathologist and head of the department of forensic medicine at the University of Pretoria‚ at the request of the state and in compliance with Koen’s order‚ had attempted to get access to Zuma’s medical records.”

He required the information to advise the state in what areas of specialisation a state-appointed medical practitioner should be chosen. Saayman was unable to obtain any information. In the circumstances‚ the state appointed Sarkin.

“Further correspondence speaks of a meeting between Kenneth Mthombeni‚ acting regional commissioner of the department of correctional services in KwaZulu-Natal‚ and Col Du Plooy‚ on August 11.”  This letter‚ signed by Downer‚ says Mthombeni, informed Du Plooy that he remained responsible for granting access to Zuma including while he was hospitalised at the Pretoria Heart Hospital‚ and the NPA must make a formal written application to see him.

POLITICAL WEEK AHEAD: All eyes fixed on apex court

1.
Supreme Court of Appeal clears the way for Billy ...
National
2.
Criminal case with Gupta-linked suspects among ...
National
3.
SA hurtles towards huge fuel price hike with no ...
National
4.
Strike-hit Sibanye says it will honour outcome of ...
National / Labour
5.
Most don’t appreciate what the job as Eskom CEO ...
National

1.
Supreme Court of Appeal clears the way for Billy ...
National
2.
Criminal case with Gupta-linked suspects among ...
National
3.
SA hurtles towards huge fuel price hike with no ...
National
4.
Strike-hit Sibanye says it will honour outcome of ...
National / Labour
5.
Most don’t appreciate what the job as Eskom CEO ...
National