Mboweni’s angst is a product of the dysfunction in his own party and cabinet. But this seesaw of crippling indecision is costing SA a prosperous economic future 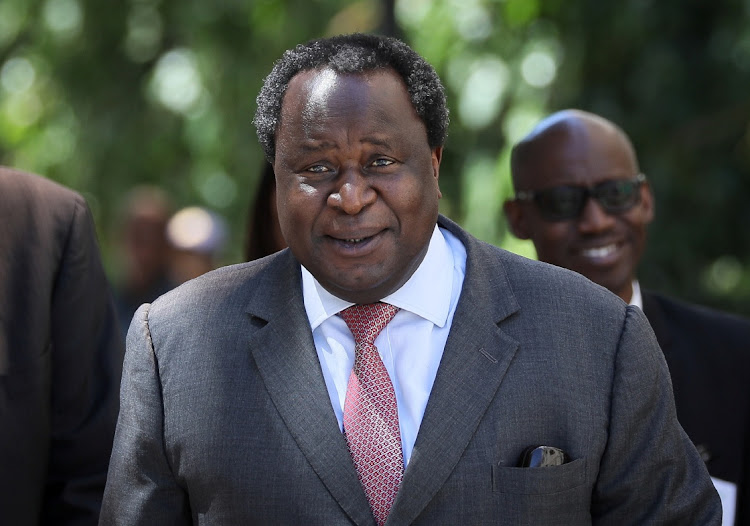 But I can imagine him moving around his office at home in Magoebaskloof, Limpopo, shifting from one 3G dongle to the next, to find enough reception to allow him to connect from the mountain. I’m told he has a 900-page book at hand too, presumably with volumes of budget data, which he uses as ammunition to tell everyone looking for “urgent” budget allocations to get lost.

Mboweni is under intense pressure from his cabinet colleagues right now, many of whom have several “off-season” ideas about why the government should dispense more money than was tabled in his February budget.

It can’t be easy. He is like a bodyguard of sorts who, with his National Treasury colleagues, is trying desperately to stick to the narrative of fiscal consolidation amid a sea of demands.

This pain was palpable last week, as he spoke of the need to respect the “sanctity of the budget framework”.

He’s not wrong — and it’s a big source of tension in a country with a tendency to make fiscal decisions on the fly, as though we’re constantly deciding whether a brown or pink face mask is suitable for the day.

Neither is it a new problem. It took root during the tenure of former president Jacob Zuma and culminated in him promising free tertiary education. And the result was inevitable: our sovereign credit ratings spiralled down, hitting junk status in 2017.

Gauteng’s e-tolls are also a prime example of this sort of reactive and inconsistent fiscal decision-making.

These tolls were financed by a government-guaranteed bond, and motorists were meant to pay to cover the cost. Yet, politicians routinely shot down this “user pays” principle, and nobody stood up to explain that abandoning this principle would represent a massive fiscal U-turn with negative consequences for our borrowing programme.

Given the culture that has developed of altering spending decisions mid-year, it would suggest that Mboweni’s February budget is far from cast in stone. The spectre of more “off-season” changes and “special appropriations” looms large.

Covid and the recent unrest have heightened the calls for extra resources.

The problem is, Mboweni and the Treasury do not enjoy the sort of political cover that would insulate them from crazy ideas from ministers or organisations like Cosatu.

Already, in the aftermath of the unrest, the government announced that the R350 per month grant for the unemployed will be reinstated for the rest of the financial year. It puzzles me how it was cancelled in the first place: even a first-year politics student could tell you that cancelling the grant in this environment was foolish.

The other idea currently touted is that of a basic income grant (BIG).

Here, it’s a question of affordability, and the government should know at this point whether it’s doable or not. Yet, it hasn’t said, either way.  This helps nobody. What confuses investors is the absence of certainty — not necessarily whether the decisions are right. Unfavourable choices can be prepared for and priced in. What investors want, more than the wisdom of Einstein or gimmicky slogans (think “new dawn”), is certainty.

What hasn’t helped Mboweni is that many of the “economic reforms” promised in recent years haven’t materialised.

On this score, I measure the success of President Cyril Ramaphosa’s “reform” using the yardstick of his 2018 undertaking to introduce e-visas.

Now, e-visas are a fairly simple innovation, which would allow tourists to enter the country with less fuss. Yet even this hasn’t happened.

And, if you can’t get something like that right, what are the odds you’ll be able to restructure a behemoth like Eskom or SAA?

Why is this? What are the blockages to even the simplest reforms?

My time in the backrooms of the government showed me that a lack of balls is the reason SAA had to be revived through a messy business rescue, instead of a self-managed process to either directly recapitalise it or shut it down.

The other one is the spectrum programme. Opening up broadband spectrum could, in one fell swoop, boost investor confidence and tangibly improve the opportunities for every South African. Again: nada.

Last week, Mboweni let rip during an interview with the SABC’s Vuyo Mvoko.

“This spectrum issue has been discussed for 10 years. Why has it not been resolved? The reason is … there are too many fingers in the till. Too many people are contaminating the system. They want this percentage or that percentage of the spectrum. They use political influence to delay decisions,” he said.

Some may have thought Mboweni was taking a dig at communications minister Stella Ndabeni-Abrahams. But I doubt it, since we’ve had more than half a dozen ministers in that portfolio in the past decade. The problem goes way back.

Mboweni is convinced that the reforms under the Vulindlela programme are bearing fruit. Vulindlela has become a technocratic detour through the Treasury and the presidency: it works as a bypass for policy decisions that may struggle in the portfolios under which they fall, often because the politicians running those departments are serving vested interests.

But the fact is, there would be no need for something like Vulindlela were Ramaphosa’s reform plan a real gospel, with authentic disciples.

It goes back to the reform promises of the CR17 campaign. Yet, even there, the disciples were former Zuma-ists — including Ramaphosa himself, who was co-opted into the train wreck when he volunteered to serve as Zuma’s deputy from 2014.

A cabinet crying out for change

Mboweni says the economy needs “lubricants” to ignite growth. That may be, but one of the reasons it isn’t happening is that we have a cabinet that is less coherent than a kindergarten class.

But there’s a joke going around that says Ramaphosa stopped his “new dawn” public walks because he found a box labelled “decision” in the doorway every time he stepped out of the house, and he thought it was too heavy a burden to pick up.

In truth, that may well be the reason he hasn’t reshuffled a cabinet just screaming out for change.

This sort of morass suggests there’s little chance that Mboweni will find the space to consolidate anything in the next two years. Bad ideas will continue to drown him out.

We’ve had talk of National Health Insurance (NHI) for years, so don’t be surprised if we keep hearing about a BIG for another decade. Of course, what may speed it up is the likely revival of the protests we saw last month.

Mboweni’s angst is a product of the dysfunction in his own party and cabinet.  But this seesaw of crippling indecision is costing SA a prosperous economic future too.

Can Mantashe extricate himself from the false dichotomy of coal-versus-renewables?
Opinion
1 year ago

SAM MKOKELI: A cabinet reshuffle is not enough to bring about reform