SA may avoid the worst-case Covid-19 scenario, but it will take a dramatic shift in approach if the economy is to rebound strongly from the pandemic 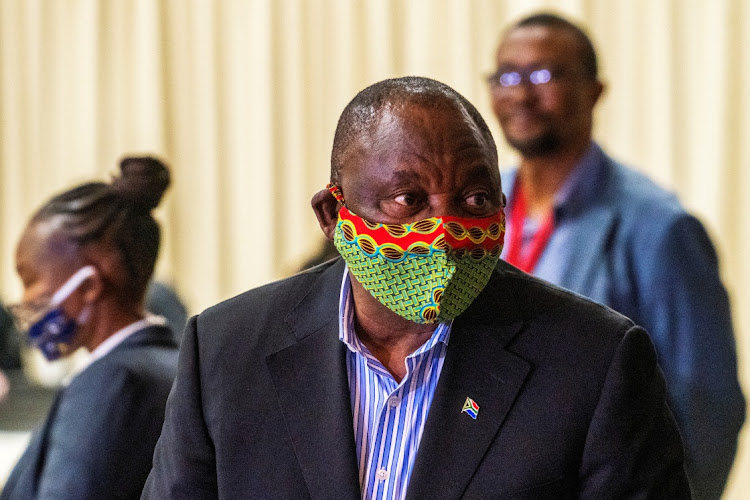 Though most of the country went back to work this week, it is going to take a lot more than the rapid reopening of the economy to minimise the lasting economic damage from Covid-19 and prevent job losses from becoming permanent.

Two other key ingredients are needed to ensure that the return to work is sustained and employment protected, argues University of Johannesburg professor of 4IR practice and national planning commissioner Miriam Altman in a new paper written for the Covid-19 Economists Group.

The first ingredient is obvious: providing widespread support for businesses and workers to limit the extent of permanent damage. To bridge across to the other side of the pandemic with some hope of getting onto a higher growth path, SA will need to reach up to 90% of those in distress, Altman says.

Crucially, says Altman, more viable ways must be found to achieve sustained compliance in townships and informal settlements, failing which SA could find itself back under a second, economically more devastating lockdown.

“The highest priorities in lifting out of a lockdown must be to dramatically strengthen risk-adjusted and physical distancing strategies, and to enable the fastest route back to economic activity by supporting workplace readiness,” says Altman. “This will give SA a chance of pulling through to a sustainable future.”

The Unemployment Insurance Fund’s temporary employer/employee relief scheme payouts are backed up to April. While R15bn has been paid out by May 26, benefiting 3-million workers, claims worth R2.3bn, affecting more than 76,000 employers and 500,000 workers, have been rejected.

As of April 28, one month into the lockdown, the department of small business development had disbursed roughly half its R530m budget to just 759 firms, having rejected more than half the 30,000 applicants.

The banking sector has done better, providing more than R15bn in loan repayment leniency and other relief to 85,000 individuals and 75,000 firms so far, according to the Banking Association SA. 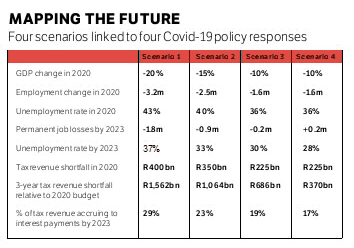 Up to R200bn in cheap government-backed loans to distressed but solvent firms finally started to flow through the banking system last week. So far the take-up has been “fairly low”, according to Reserve Bank deputy governor Kuben Naidoo, with only about R2bn-R3bn dispensed by each of the big four banks.

During the 2008 financial crisis almost 1-million jobs were lost and nearly all of these were among young people. It took five years for job numbers to recover on aggregate, but there were still 500,000 fewer 15-to 24-year-olds working at the start of 2019 than at the time of the crisis.

This time, most perniciously, the last industries that will be fully reactivated after lockdown will be retail and hospitality — SA’s biggest employers and the main creators of youth employment.

Most at risk are about 2.3-million formal jobs in retail and wholesale, hotels and restaurants; almost 900,000 in construction; and 2.9-million in the informal sector. Also vulnerable are the roughly 1.8-million workers who are on nonpermanent contracts, and 5-million who work in small firms.

Altman says much depends on the strength of policy implementation “to enable firms to cross the bridge to the other side with as many employees in tow as possible”, and to limit the damage to economic capacity.

With regard to testing, global shortages of reagents and test kits have led to a national backlog of more than 80,000 tests, resulting in a 10-day wait for results.

To be effective, SA should get test results in 24 hours and trace at least 80% of all infected people’s contacts within two to three days. Delays increase the risk of spreading the virus.

Altman ’s paper argues for better ways of optimising testing, for example by using a screening app that allows people to send information on their symptoms to the health authorities and have testing follow from there.

Wits University professor Shabir Madhi, a chair of the ministerial advisory committee on Covid-19, suggests that an even better approach would focus on strengthening non-pharmaceutical interventions such as distancing, mask wearing and disinfection.

A key message of the paper is that SA’s focus must shift. It has spent too much time on detailed control with both the government and populace having become preoccupied with the minutiae of lockdown logistics, not least fighting over the alcohol and tobacco bans.

Altman says SA’s overwhelming priority should be to strengthen risk-adjusted an physical distancing strategies. This would entail engaging deeply with communities to get buy-in for containment strategies that are workable in crowded settlements and on public transport. 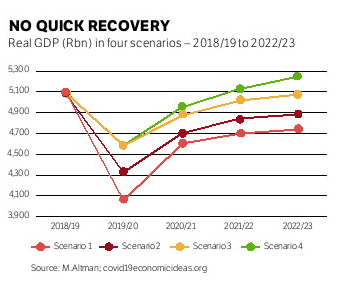 “I don’t think we’re near where we need to be in community-driven strategies,” say s Altman. “Most people aren’t taking this seriously in the townships, partly because [compliance measures] aren’t shaped in a way that people can actually adhere to … I’m arguing that the real watershed could be to start getting on top of methods for community engagement that work.”

Most forecasters have suggested SA is heading for a GDP contraction of at least 6%-10%.

However, modelling by development economist Channing Arndt and others for the National Treasury shows that while a three-week lockdown and rapid reopening might have caused the economy to contract 5% this year, an eight-week lockdown followed by a slow reopening could cause growth to plunge 12%, costing about 1.8-million jobs and lifting unemployment from 29% now to about 37% by the end of the year.

Altman presents four growth and employment scenarios. How well SA does depends largely on how many more days of economic activity are constrained by lockdowns. That, in turn, depends on how well SA executes risk-adjusted and community-based strategies to contain the virus.

For instance, each day of a level 4 lockdown cuts 2020 output by R4.1bn — but it doesn’t end there. How badly the economy is scarred also depends on how successfully SA limits retrenchments and firm closures.

Altman estimates that, when viewed over the following 12 months, the cost of a level 4 lockdown climbs by a further R1.2bn.

Scenario 1, the worst-case outcome, would unfold if the economy is reopened but containment measures are largely ignored in townships, leading to the reimposition of deeper lockdowns until September.

And, to compound the damage, the provision of business support is too little, too late.

If this happens, SA can expect GDP to contract 20% with 3.2-million initial job losses, of which 1.8-million are permanent. The new unemployment rate rises to 37%. Given the long-term destruction of economic capacity, Altman warns that SA would be consigned to a “dark decade” of rising fiscal and social distress and would ultimately require an International Monetary Fund bailout.

In scenario 2, SA performs a bit better at testing and tracing, so reduces the lockdown period by two weeks. But, again, far too few firms get support and there is significant retrenchment and business failure. GDP falls 15% in 2020 and 2.5-million jobs are lost — 900,000 permanently. Unemployment reaches 33%.

In scenario 3, the level 5 and 4 lockdowns last 65 days and then drop to levels 3 to 1 over the course of 2020. Support gets to 90% of distressed firms, which prevents many closures and retrenchments. Wearing a face mask, hand washing and sanitising become routine for all. There’s an app for people to report if Covid-19 symptoms appear. Testing and tracing are quick and effective.

In this event, GDP falls 10% in 2020 and 1.6-million jobs are lost, but only 225,000 of these are permanent losses, limiting the rise in unemployment to 30%. However, after recovering to pre-crisis levels, economic and employment growth remain stagnant because structural reforms are not introduced.

In the best-case scenario (4), the government goes beyond the requirements of scenario 3, putting great effort into professionalising the state and pursuing new sources of dynamic growth. Investment is stimulated in renewable energy, infrastructure, agro-processing and associated exports. Digital migration takes place, spectrum is released, and broadband access made more affordable.

This lays the foundation for growth to climb to 2.5% by 2023, and for employment to be restored to pre-lockdown levels and then keep climbing. Public finances are strained but there is a path to restore SA to fiscal sustainability.

“The best-case scenario presented in this paper really is the best case and will require significant commitment and course correction in Covid-19 policies and in demonstrating commitment to required structural change,” says Altman.

“The worst-case scenario is not the worst that can happen. There could be domestic reverberations into the banking sector or more dramatic shifting to reduce labour ratios or political cleavages that deepen as resources become ever more scarce.”

Given that the government is currently failing to achieve rapid testing or township compliance, or to provide substantial, timely relief to firms and workers, SA will have to pull out all the stops this month and next if it is to avoid sinking into the bottom two scenarios.

“If we stick to opening from June, it is possible we could achieve scenario 3. Government is definitely talking about the kinds of reforms needed, but we need to see movement on them,” says Altman.

“Credibility will be gained if we could see more forceful strengthening of government capacity. If so, then we would move to scenario 4 as a possibility. Veering back to scenario 2 is still possible, but it finally looks like we might avoid scenario 1 — it all depends on how we manage it.”

‘Fixing your roof before it rains’ is always solid advice, as is formulating policies based on real evidence
Opinion
11 months ago
Next Article

SIFISO SKENJANA: Business process services sector could be just what the doctor ...

Vehicle sales figures show the mountain the industry has to climb

SIFISO SKENJANA: Business process services sector could be just what the doctor ...

Vehicle sales figures show the mountain the industry has to climb