The relentless onslaught of bad news in SA is such that the public has become largely inured to tales of corruption and venality. You have to dig for the bits that make them come to life 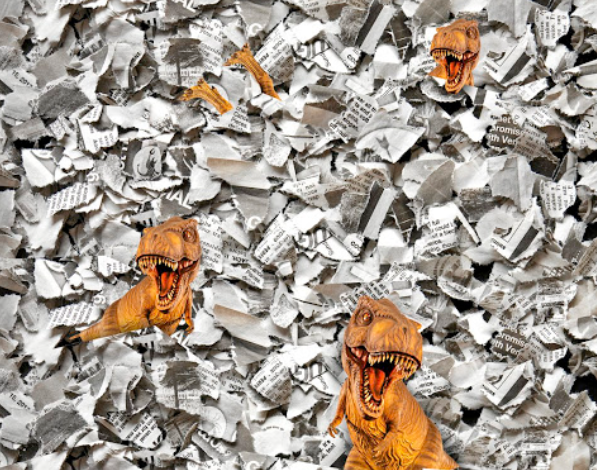 If you’re a Luddite looking for an allegory about how technology is destroying us, you need search no further than the story of the dinosaur that killed a Spanish man.

A father and son noticed a bad smell coming from a papier-mâché stegosaurus in Santa Coloma de Gramenet, a small town close to Barcelona. When they investigated, they saw, through a crack in the dinosaur’s leg, the body of a man.

A spokesperson for the local police said: "We found the body of a man inside the leg of this dinosaur statue. It’s an accidental death; there was no violence. This person got inside the statue’s leg and got trapped. It looks as though he was trying to retrieve a mobile phone, which he’d dropped. It looks like he entered the statue head first and couldn’t get out."

Death by dinosaur, or death by device.

I’m imagining this poor man trying to get a stegosaurus selfie, perhaps distracted by thinking about the amusing caption he’s going to use on Instagram — something along the lines of, "ha, here’s me trying to teach granddad to use his new mobile phone", except in Spanish obviously — and then dropping his iPhone 12 into the dinosaur’s maw.

He plunges in to rescue it — and that’s when he becomes a casualty of the confluence of tech shininess and human clumsiness, and a metaphor for species extinction.

There’s such an overwhelming torrent of bad news emanating from SA right now, like the stench of a decaying corpse trapped inside the dinosaur of democracy. It’s almost impossible to comprehend, and I think that’s why many people are deciding to deal with manageable, bite-sized chunks of news instead.

There have been many important stories in the news in the past few weeks. For example, there was (and it’s still ongoing) News24’s exposé of what it’s calling the Eskom Files — "a leaked trove of Eskom documents, including thousands of pages of letters, forensic reports, e-mails, bank statements, and payment analysis. The documents … reveal the depth and breadth of corruption at Eskom."

Corruption reports have become like sports journalism. You only care
about the score, and only if your own team is involved

This includes the revelation that the Special Investigating Unit is looking into dodgy contracts worth more than R178bn.

Weirdly, this huge news event hardly seemed to register on people’s radar. Corruption reports have become like sports journalism. You only care about the score, and even then, only if your own team is involved. (The current state capture score as tabulated by the Daily Maverick, by the way, is Guptas: R49,157,323,233.68; SA: 0.)

The bit that struck me about the Eskom Leaks is the tale of how a senior executive tried to organise a contract and directorship for his lover, pastor and mother of his child (those are all one person, apparently). I only remember this because his demands included "a house in Jamaican Music Street, Pretoria East, and a Mercedes-Benz worth R600,000".

What a great name for a street, I thought. At least the guy has some cultural capital of his own, even though the Merc is the usual crass overreach of SA’s nouveau-corrupt class.

I pictured him cranking up the sound system in his Merc, blaring out Them Belly Full (But we Hungry), Bob Marley’s classic warning song about letting your country’s poor people go hungry, and singing along joyously: "A hungry mob is an angry mob."

Alas, some quick research on TimesLive revealed that "the streets are named after Durban July racehorse winners — Jamaican Music, Spanish Galliard, Jollify Ring and In Full Flight — and some residents have their own horses".

The only bit that struck me as unusual was the crappy name of the company that received the R150m for supposedly phoning up the SABC and persuading it that news about lockdowns and people dying was of mild national interest.

The big stories are starting to struggle to stand out, there are so many of them. And the smaller stories that are still vitally important struggle even more.

The only reason I’m following the mayoral race in Joburg is because, apropos of Andile Mngxitama deciding to contest the election, someone shared a picture of the Black First Land First (BLF) leader arriving to vote in Tlokwe in 2019 on a cart drawn by two donkeys, like some sort of jury-rigged Jesus intent on turning five loaves of bread and two fish into a collapsed agricultural system.

It’s these little touches that make a story come alive. I pictured Mngxitama with a loudhailer, declaiming "Exult greatly, O daughter Zion! Shout for joy, O daughter Jerusalem! Behold: your king is coming to you, a just saviour is he, Humble, and riding on a donkey, on a colt, the foal of a donkey." And I do love how the tale of Christ’s donkey is basically an allegory for expropriation without compensation.

In Luke 19: 28-40, Christ says: "Go into the next village, where you will find a young donkey that has never been ridden. Untie the donkey and bring it here. If anyone asks why you are doing that, just say, ‘The Lord needs it’."

The gospel continues: "They went off and found everything just as Jesus had said. While they were untying the donkey, its owners asked, ‘Why are you doing that?’ They answered, ‘The Lord needs it.’ Then they led the donkey to Jesus. They put some of their clothes on its back and helped Jesus get on."

As convincing a biblical justification for radical economic transformation as you could hope for, and a useful echo to BLF’s belief that "the Christian faith calls for liberation by any means necessary. It’s a sin to be oppressed and allow evil to reign supreme in our midst."

In the tsunami of corruption revelations we’re all drowning in, every story needs its dinosaur to make it memorable. This is probably why people sometimes spend more time giggling at the ridiculous missteps of politicians than railing at their overwhelming evil.

When you’re trying to make sense of mundane chaos, you need the little details to give your brain a way to build incremental defences. You need the absurd narrative twists to muster the energy to imagine a path out of the morass.

It used to be that a ‘letter to the editor’ was a contribution to a debate, adding in missing details, or asking for clarification. How, in the age ...
Features
4 months ago

A free media is not something we should take for granted. Neither is the public’s guaranteed trust in the fourth estate
Features
4 months ago

Much of the breathless reporting of UCT lecturer Lwazi Lushaba’s now-infamous political science lecture is based on 12 seconds of a 55-minute video. ...
Features
5 months ago