SA society, always teetering on the edge of fracture, has turned particularly ugly behind the closed doors of the lockdown 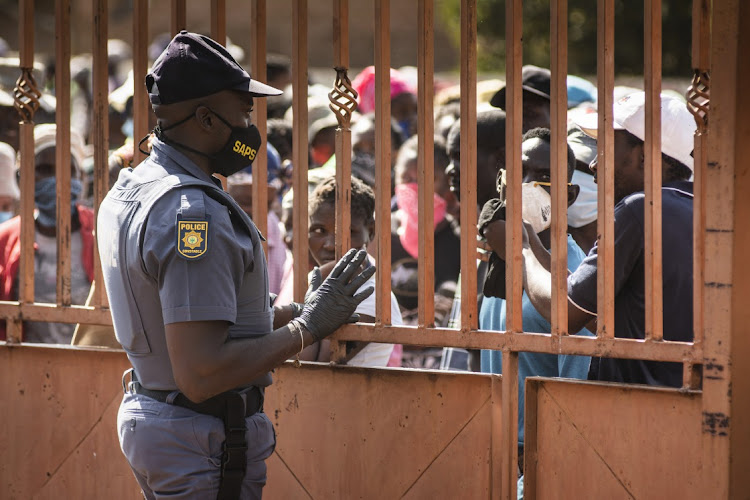 A police officer patrols as residents queue to receive food parcels at a distribution point at the Zenzele Counselling Project in Finetown, Johannesburg. Picture: Waldo Swiegers/Bloomberg

SA society, always teetering on the edge of fracture, has turned particularly ugly behind the closed doors of the lockdown. Even though there is little firm data on a pandemic that didn’t exist a year ago, and epidemiological and economic models are shifting all the time, many people have nonetheless formed inflexible, terrifyingly absolute positions.

On the one side you have the "enders" who swear every bit of data has always told us that lockdowns are an abomination, and the country’s workers should be flooding into offices; on the other, we have the "downers", who will regale you with terrifying data about Swedish towns where the elderly are being swept away as if by a flood.

In this war, played out in a blizzard of posts on Facebook and Twitter, both sides seem fatally compromised by confirmation bias, scouring for articles that accord with their viewpoint. Any data that undermines their view is dismissed as emanating from a "fringe expert".

How has it become impossible, in a country of such contradictions, for people to hold multiple viewpoints in their heads at one time? Surely one can be terrified that the pandemic is going to kill thousands and be in a panic about the economy collapsing, jobs vanishing and hunger rocketing?

There is, in particular, a narrative that suggests it is "big business", its craven CEOs and its media apparatchiks that are conspiring to strong-arm policymakers to end the lockdown and force people back into pox-ridden offices. To this school, the dichotomy is stark: save lives, or the economy.

Like most stereotypes, it falls flat at the barest prod. For one thing, as Northam CEO Paul Dunne points out (page 50), lives will be lost either way. And it is easy to call for extending the lockdown to reduce infections when you’re guaranteed a salary at the end of the month. But the fragility of SA’s economy means vanishingly few outside a privileged centre can be assured of this.

Companies are tumbling. This week, horseracing company Phumelela joined Comair and Edcon in business rescue. Cashiers, tellers and shop assistants are being told their wages aren’t guaranteed. It is this group who are most exposed in an economy that, Business for SA says, may contract as much as 17% this year. Most CEOs will be able to weather a protracted lockdown far better than their workers, many of whom are keenly aware of how tenuous their future income is.

The point is, in lifting the lockdown, it is better to be guided by evidence than by politics.

Last week, Discovery CEO Adrian Gore argued in the FM that we should be led by the data, imperfect as it may be. "Set out the key issues, and continually update the answers as data emerges," he said. Nor will those answers be absolute — all scenarios are messy, and entail juggling risks.

This week, economist Paul Krugman wrote in The New York Times how the University of Washington’s Covid-19 model has been drastically overhauled, with its predicted US death toll soaring from 72,000 to 134,000. "It turns out that epidemiologists often disagree, sometimes by a lot. Their forecasts are often wrong, sometimes very wrong indeed. They are, in fact, the worst people to rely on in a crisis — except for everyone else," he said.

Nobody forecasts pandemics especially well, said Krugman, but you’re better off listening to the epidemiologists than to law professors, politicians, or economists who claim to know better.

In SA, it does mean trying to eliminate the sloppiness that has entered our public debate in recent years, where facts are relative, and expendable. It might work in politics — it doesn’t work in public health.

University of Edinburgh politics professor Christina Boswell says one of the striking elements of Covid-19 in the UK has been "the apparent rehabilitation of the expert" from the nadir of the Brexit era, when economists, lawyers and academics were famously maligned.

South Africans, polarised by the lockdown, need to grapple with the uncertainty of Covid-19, rather than leap upon one piece of data and discard the next to fortify an intractable position. It is, in fact, a lesson we’d do well to take beyond Covid-19, to encourage more constructive conversations.

How are we to make crucial, rapid decisions in the absence of information and where the only certainty is uncertainty?
Features
11 months ago
Next Article