After the Covid-19 crisis SA cannot be the same as it was before the pandemic. There is an opportunity for the government to implement policies that place the country in a stronger position. But will this chance be grasped? 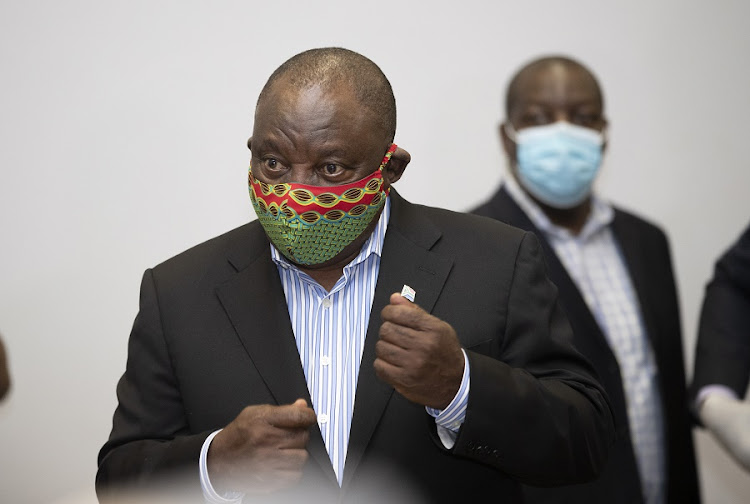 Call in the International Monetary Fund (IMF) for the economic restructuring that a factious ANC government cannot launch – increasingly, it seems inevitable. This proposition derives from the hallowed proverb, of which cabinet members might be unaware, that beggars can’t be choosers.

In mind here is not the IMF’s short-term cushy little “rapid financing instrument” quickly to smack an aberration. Over and above there lingers, for use in a full-blown payments crisis, the long-term biggie known as the “extended credit facility”.

It will come, if it comes, with “conditionalities” (see box) unlikely to meet with widespread applause in councils of the ruling party. This alone offers comfort that a possible 180-degree change in direction will be good for SA; a chance ultimately to escape from the economy’s hole that, even before Covid-19, was dangerously deep.

In the absence of fiscal space, a gradual and growth-friendly fiscal consolidation and increased spending efficiency are needed ... Given the structural nature of the growth slowdown, the consolidation should be accompanied by reforms that reduce the cost of doing business and boost private investment.

That much has long been evident. In his 2020 budget speech, finance minister Tito Mboweni mentioned that the increase in government spending was “mainly due to debt-servicing cost”. The amount was estimated at R229bn for 2020/2021. For context, it’s less than half the R500bn aid package being created to fight Covid-19.

The numbers are overwhelming, whether in the billions of rand to be thrown by SA at Covid-19 or the millions of people to be thrown onto the unemployment heap. For further context, consider that the size of the envisaged R500bn package is roughly double the R255bn in total contributions to all SA retirement funds for 2018.

Hypothetically, then, wholesale expropriation of all employer and employee contributions into public and private funds for the past two years would barely cover the R500bn. Put differently, R500bn (10% of GDP) equates to over 11% of the R4,4-trillion there was in SA pension funds at end-2018 valuations.

This point is made to illustrate that a skim from the top of all pension funds, for investment in assets that government will prescribe, would hardly touch sides relative to the magnitude of need. In a regime of prescribed assets, funds will be forced to buy mountains of government bonds and bills at whatever rates the government prescribes.

This will be a subsidy of the government by funds, to the detriment of members, leaving them with proportionately less to invest for market returns. It will also contradict government policy that has hitherto encouraged, via tax breaks, the carrying out of the purpose of pension funds to provide for pensions.

Basic arithmetic intrudes onto the dream that SA has the domestic resources to pay its way. To judge by the absurdities in lockdown restrictions, as if devoid of economic consequence, this dream has currency. As such, it’s all the more dangerous when employers small and big are forced to face collapse. They include JSE-listed companies that only months ago were among pension funds’ favourites for the reliability of their dividend streams, now forgone.

Perish the thought that Covid-19 outlasts the R500bn. The pair is in a race against time when the odds are unknown and the finish is unsighted. A dream, that there’ll be a rapid V-shaped recovery for buoyant tax revenues to kick in, contrasts with a nightmare, that there won’t be. Shock treatment is the SA Revenue Service’s estimate of a R285bn loss in tax collections for the year.

And yet, even in the gloom of economic devastation, human nature looks for a light. SA after the coronavirus cannot be the same as the SA before. For better or for worse? It depends on whether rare opportunities are grasped; so rare but also so momentous that they can be transformative.

This is the chance for SA to step from the ideological quicksand that has stalled prosperity and exacerbated poverty. It’s the only chance, because, once the Treasury is denuded by borrowings, and loans have devastated capital accumulation, the consequence of no money is no food. Mass starvation worked for Lenin but won’t work for occupants of Luthuli House.

Denialists, who opportunistically persist with populist rhetoric, are delusional. It’s equally delusional, when deep in a pit, to dismiss an IMF lifeline.

Money cannot be created from thin air. Taxation cannot be extracted, or new jobs created, from a shredded economy. Loans concluded must be repaid. Coffers raided (for example the Unemployment Insurance Fund) must be replenished. With the billions of rand signalled for raising from every conceivable source, for relief from hardship and stimulus for growth, policy direction should no longer be obfuscated in nebulous phrases.

President Cyril Ramaphosa is guilty of them. Early in the lockdown he was earning high praise for his statesmanship. Then he was talking of his resolve “to forge a new economy in a new global reality”. But a few weeks into the lockdown, he was telling a Durban audience that “radical economic transformation must be central to plans to rebuild and repurpose”.

Are they one and the same? If not, which does Ramaphosa favour?

Vague pronouncements play to all galleries but also frustrate them. There’s nothing to indicate whether this putative restructure will be weighted more to a market than a statist economy. They’re poles apart. The former is sensitive to investment and the latter is insensitive to incompetence.

The sanguine indication is that Ramaphosa is so far letting Mboweni have his head, despite embarrassing blips in midnight tweets. He is complemented by Reserve Bank governor Lesetja Kganyago and at their elbows are former finance minister Trevor Manuel, appointed as AU special envoy to international aid institutions, and his Rothschild colleague Martin Kingston as representative of organised business.

Between them there’s a meeting of minds that diverges from the Jacob Zuma leftovers. Yet these linger, even in cabinet, serving no purpose that is encouraging to business confidence. Like the trade unions, constrained by the surge of joblessness, they’re marginalised by an absence of choices. Much as they might rail against the IMF as an imperialist dog, it’s not the IMF’s cupboard that’s bare.

Government is going to the IMF for emergency Covid-19 assistance. Available at a nominal interest rate, it has to be repaid in dollars. The risk is therefore in further weakening of the rand. Additional long-term assistance, however, would come with conditions usually enunciated by the IMF in granting loans.

The IMF isn’t a philanthropic entity. When approached as lender of last resort, by a country whose fiscal deficit is unmanageable, it insists on structural reforms to ensure that the loan can be repaid. It means that the impediments that caused the borrower to request the loan in the first place needs to be remedied.

Done by SA, off its own bat, there’s no “loss of sovereignty”. Done at insistence of the IMF, or agencies that rate government debt, it will be so criticised. Beyond argument is that the restructure path be pursued while there’s still a tax base capable of resuscitation.

That much was recognised last year in the National Treasury growth plan, released by Mboweni for discussion and endorsed by Ramaphosa, when prospects for public-private partnerships generated enthusiasm. There wouldn’t be much daylight between the growth-plan principles and the expected IMF “conditionalities”.

Through the current environment – the perfect storm of corporate shrinkage, tax evaporation and jobs massacre – there can be no sacred cows in a credible review of obstacles to investment. They are sufficiently apparent from the downward slide of the past decade. Neither can there be infrastructure projects, on the scale envisaged, without participation of a private sector untrammeled by objectives of the “national democratic revolution”.

There will be disruption. Such is the likely proliferation of insolvencies and job losses to follow the lockdowns that the extent of severity is impossible to foretell. Better believe that the military hasn’t been called up, to revive memories of the 1980s-type repression, unless a serious need for crowd control is envisaged.

The Disaster Management Act falls short of the State of Emergency legislation. But it does give the minister designated by the president – in this instance, Nkosazana Dlamini-Zuma – wide-ranging discretionary powers; for example, to make regulations for “preventing or combating disruption”. It sounds authoritarian because it is.

That’s part of the trade-off between hunger-invoked civil disobedience and relative stability for economic revival. It’s the ungracious alternative to a social compact proven elusive during the best of times and no less today. Headlines reflect the doings of politicians, not the individual generosities by which more fortunate households support the less fortunate. It’s at this level that empathy and goodwill prevail over racist polarisations.

Through the lockdowns, out-of-the-box thinking has focused on raising and distributing money for immediate exigencies. More thinking should be applied for its use beyond rapid consumption, so that at least part of it can be used for sustainable activity. To be avoided is a total either/or between humanitarian relief and economic stimulus.

For example, there are ways to restructure social grants so that they aren’t only handouts. At present, they endorse dependency. Rethought, they can be multipliers that assist recipients to generate their own incomes. Reports on ways to do this have been gathering dust in the social development ministry.

And then there are the respectively frightening spectres of unemployment at record highs and the exchange value of the rand at a record lows. But rethought in combination, they’re the elements for an upsurge in local manufacture and forex earnings against the likes of China and India.

What’s the catch? Nothing other than an environment seen to stimulate and reward honest endeavour. In the corrupted SA of recent years, this would be a big ask. But given present circumstances, of indefinite duration, it’s a priority task for an inspirational leader. South Africans of all hues and creeds are forced by the dynamics of short-term survival and long-term prosperity to stand together now.

Covid-19 wouldn’t have been advocated as an opportunity. Having arrived, however, it can become one.

BUSI MAVUSO: Seeking an IMF loan will take us from dogma to pragmatism

ANC leadership is finally accepting the world as it is and not how it wants it to be, writes Busi Mavuso
Opinion
11 months ago
Next Article

CLAIRE BISSEKER: Our economy has run out of road, yet we are still hobbling ...

CLAIRE BISSEKER: Our economy has run out of road, yet we are still hobbling ...