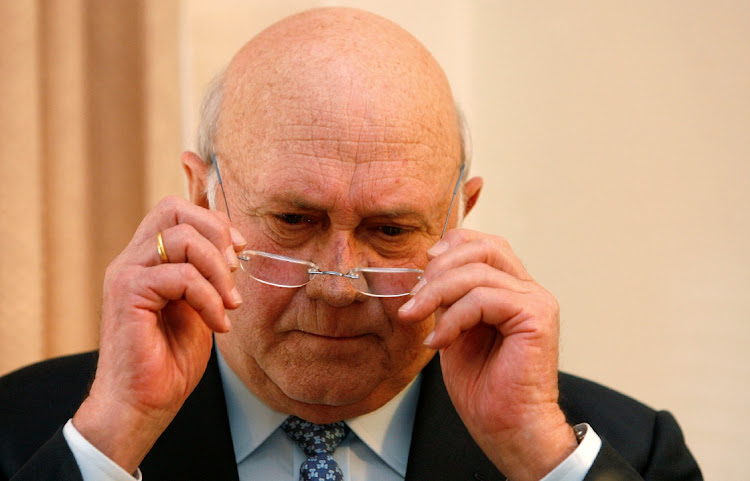 FW de Klerk’s death last week has generated a flood of differing assessments. It’s the result, one may say, of the former president’s complicated legacy. But no-one likes a complicated story. So we’re challenged to reconcile these disparate assessments to arrive at a rounded, fact-based understanding of De Klerk’s place.

De Klerk wrote himself into the history of SA on February 2 1990, when he announced the unbanning of the ANC and other liberation movements as well as the release of Nelson Mandela from prison. While this set SA on the path of reform, the facts show he failed both the transition and his foot soldiers alike. He was economical with the truth at the Truth & Reconciliation Commission — a stance that prevented South Africans from developing a shared understanding of where we come from. He was likewise unable to come to terms with the fact that apartheid was a crime against humanity.

That’s a huge and indelible stain.

So while De Klerk committed himself and his constituency to the transition from apartheid, he never reconciled himself to the transformation that is inherent in our democracy.

It was at his urging that the cabinet agreed in December 1989 that the release of Mandela, unbanning of the ANC and talks with the liberation movement were to be part of the way forward. He went on to persuade the majority of the white population to support the transition in the all-white referendum of 1992. It demonstrated a keen understanding of his constituency, but it led him to believe he could win the hearts and minds of the black population. In this, he failed to consider that while black and white occupied one country, centuries of colonialism and apartheid meant they operated in two different universes.

Frederik Van Zyl Slabbert showed some understanding of this when he was asked to explain the gulf between the Progressive Federal Party and the ANC. In a September 1990 interview, he acknowledged he knew "very little about the ANC and extra-parliamentary politics. I did not know people in the ANC. I had never met them. I never really understood, practically, ‘the struggle of the people’."

De Klerk’s own knowledge was confined to formal interactions with collaborators and sycophants spawned by apartheid.

De Klerk failed to cross the Rubicon into a transformed, democratic SA

His universe was defined by birth and upbringing: his father Jan de Klerk was an unapologetic segregationist; his maternal uncle was the hardline JG Strijdom. De Klerk’s world was immersed in Calvinist values, cultural identity and racial superiority.

This exerted its grip when he and his party engaged in the goal of the transition; the inconvenient fact was that he could not break out from the ideological stranglehold of apartheid.

Throughout the multiparty negotiations, his National Party (NP) pursued the idea of group rights. Its goal was to provide the white minority with veto power in decision-making — an aim that was the antithesis of democracy.

When this was firmly rejected, the NP came up with mechanisms to achieve the same objective: formulas for decision-making in the cabinet of the government of national unity (GNU), for example, and the proposal of a troika through which cabinet decisions would have to pass.

Eventually, the party agreed to the provision in the interim constitution that "cabinet shall function in a manner which gives consideration to the consensus-seeking spirit underlying the concept of a government of national unity as well as the need for effective government".

Despite his posthumously released defence of the constitution, this alone shows De Klerk was no democrat. He failed to cross the Rubicon into a transformed and democratic SA; he balked at bringing his constituency into a democracy in which transformation is a constitutional necessity.

Ultimately, De Klerk’s place in history is compromised by his remaining a prisoner of his past, and his resultant unwillingness to recognise apartheid as a crime against humanity.

Maharaj served alongside De Klerk in Nelson Mandela’s cabinet. He is the co-author of Breakthrough: The Struggles and Secret Talks that Brought Apartheid SA to the Negotiating Table

To traditional Afrikaner nationalists, he is the ‘verraaier’ who sold out  and capitulated to the ANC, writes Ray Hartley
National
7 months ago

De Klerk was no Nelson Mandela. Yet he did to apartheid what Mikhail Gorbachev did to Soviet communism: destroyed the last remnants of what was once ...
National
7 months ago