The spike being reported elsewhere shows that the world is nowhere close to beating Covid-19. That offers a vital lesson for this country to not let its guard down 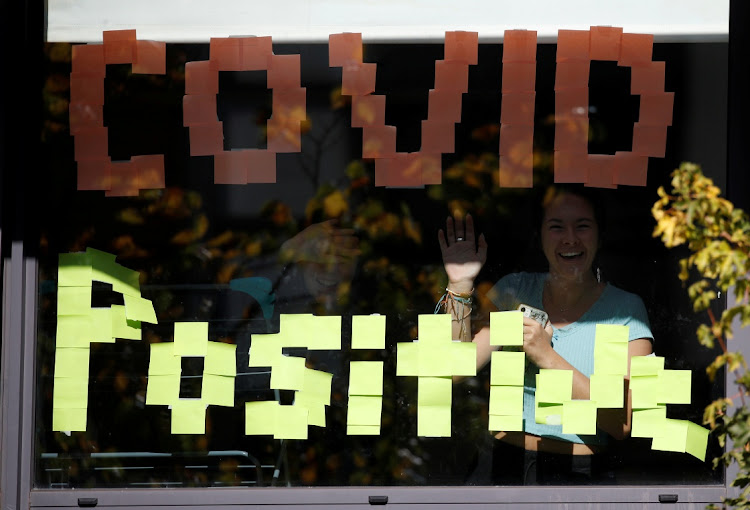 People wave through the window of a student accommodation building with a 'Covid Positive' sign displayed in it, following the outbreak of the Covid-19 coronavirus disease in Manchester, Britain. Picture: REUTERS/Phil Noble

“Don’t think that because you are in a better situation at the moment you can forget to pay attention to the virus,” French epidemiologist Dominique Costagliola recently told TV channel CNBC. “When you look at the worldwide map of cases, you see that even if you control the virus in your country, the virus is still there, so it can come back.”

Those aren’t words South Africans want to hear at the moment.

Right now, the average number of daily positive cases in this country sits at 1,239. It seems a trifling number when compared with the daily average of 12,269 that was recorded during the worst week of SA’s pandemic in mid-July.

This is why the mood is celebratory. Parks are full, shopping centres are buzzing and there is newfound optimism everywhere you look.

Maybe it’s just easier to ignore the resurgence of the virus overseas, even if the situation seems to be worsening there every week.

Some countries are dealing with more Covid-19 cases than they were when the virus first peaked in the region six months ago. The UK, France, Spain, Georgia, Albania, Bulgaria, Montenegro and the Ukraine are just some of the countries reporting a spike in new infections.

The World Health Organisation is particularly concerned about the severity of this second wave. Last week its head of emerging diseases and zoonosis, Maria van Kerkhove, said: “What is really worrying is that we’re not only seeing an increase in the case numbers, but an increase in hospitalisations. We’re seeing increases in ICUs [intensive care units].”

In France, ICUs in hospitals are nearing capacity, while hospitalisations are doubling every eight days in the UK. Other reports say hospitals in Madrid are also close to reaching capacity.

If anything, the spike shows that the world is nowhere close to beating Covid-19. And Europe’s recent experience offers a vital lesson for SA: the country cannot let its guard down.

Of course, policymakers are also grappling with how to contain the spread in a way that doesn’t cause even more damage to people’s livelihoods. Which is why many of the new restrictions look different to those imposed at the beginning of the pandemic.

As this article in Time magazine explains, some countries in Europe are wary of uniform, nationwide lockdowns that cripple their economies. Instead, they are locking down by region.

The article sets out the recent experience of four European nations: Spain, France, Ireland and Germany.

Take Madrid: there, almost 900,000 residents can leave their neighbourhood only to go to work, school or the doctor. Police are controlling access to these areas.

But the measures affect mostly poorer parts of the city. Protestors in Spain last week said that the government had done little to protect vulnerable people and have “instead opted for stigmatisation, exclusion and territorial discrimination”.

The Wall Street Journal argues here that Europe’s new hot spots are so far “struggling to configure local, lighter-touch restrictions that let economic recoveries continue but are also effective against the virus”.

Some scientists concede that public willingness to abide by lockdown rules has diminished. As a result, young people, who want to resume their social lives, have been one the main drivers of new infections all over Europe. Some of the new rules have been imposed to counter directly this fatigue with social-distancing and mask-wearing.

The countries that have kept rising infections at bay are also those that have maintained their testing infrastructure and persisted with contact tracing.

So how will SA policymakers respond if forced to confront a similar resurgence? Well, for one thing, maybe next time politicians will take the advice of their own scientists.

Again, it will also surely help SA that it is behind the curve of what is happening elsewhere in the world. With so much global experience to learn from, this country can only improve its handling of future waves of the coronavirus. Right?

Based on estimates from SA Tourism CEO Sisa Ntshona, it could take anything between 24 and 30 months for tourism activity to recover to levels ...
Opinion
11 months ago

Vaccines, and any new treatment for the disease, are not likely to mean an immediate and straightforward end to all the effects brought about by the ...
Opinion
1 year ago

Covid-19 regulations have given them an opportunity to push the boundaries of the legality, and sometimes the acceptability, of their actions
Opinion
1 year ago
Next Article

NEVA MAKGETLA: Covid-19 grant is vital, SAA not so much

The (sad) story of an SA doctor without support or protection

NEVA MAKGETLA: Covid-19 grant is vital, SAA not so much

The (sad) story of an SA doctor without support or protection