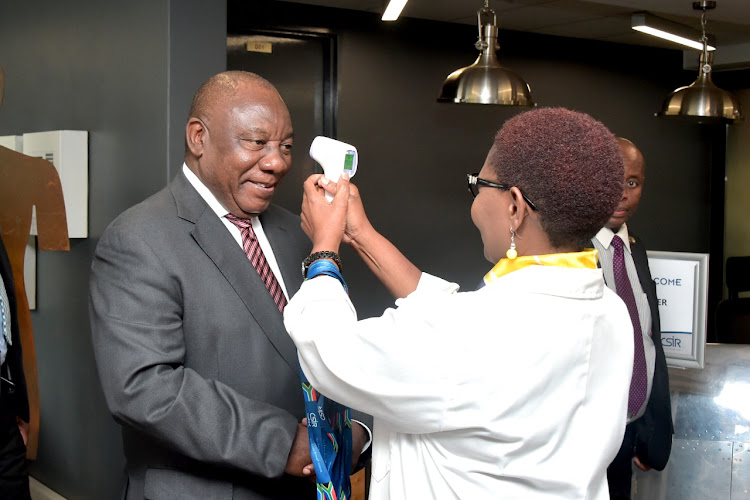 President Cyril Ramaphosa is scanned on a visit to the health department’s Covid-19 information centre in Pretoria on April 9. Picture: GCIS

It’s time for Cyril Ramaphosa to take back control from the roast chicken Gestapo, the police state disciples and the idiot ideologues in his cabinet.

Ramaphosa, heaped with praise for his decisiveness early in SA’s Covid-19 outbreak, finds his lockdown at a precarious stage. Confirmed infections, now at 3,158 with 54 deaths, are advancing slowly. But the legitimacy of the lockdown is now on trial as the autocrats in his cabinet seize power and the corrupt in his own party steal emergency rations meant for the poor.

On Friday, economic development minister Ebrahim Patel delighted in sermonising how the selling of cooked food, like rotisserie chickens at Woolworths, isn’t allowed. “As the law stands, it needs to be observed,” he said.

In the City Press on Sunday, the consistently excellent Mondli Makhanya pointed out that in denouncing “cooked food sales”, Patel sounds like a “fundamentalist denouncing the theory of evolution and insisting the universe was created in seven days”.

If Patel wants to illustrate why he deserves a salary paid with your taxes every month, he ought to explain exactly how selling cooked foods opens the gateway to the spread of Covid-19. He ought to show us his nonexistent model for this.

And while we’re at it, police minister Bheki Cele ought to reveal the epidemiological model he is relying on which shows how beating up citizens and invoking mindless petty ordinances halt the virus. There are some leaders in Brazil and the Philippines who’d just love to have the benefit of Cele’s data.

On the same score, what research did Nkosazana Dlamini Zuma, minister of co-operative governance and traditional affairs, conduct before issuing an edict banning the transport of alcohol – a body blow for SA’s export-reliant wine industry.

As Makhanya argues, there’s no real science to back it up – “the truth is that this is clearly just a ludicrous attempt to fulfil a certain desire to control”.

It’s the same with booze, he says. Of course, there are some reasons you could argue that alcohol shouldn’t be sold ever – but are any of these reasons directly correlated to the spread of Covid-19?

“What the state has done is impose a religious edict on adult South Africans to behave the way that the anti-booze brigade in parliament has always wanted,” says Makhanya.

It doesn’t exactly help, he says, that the state is displaying unnecessary force, and appearing to have loads of fun, as it mugs South Africans of their fundamental rights.

It’s tempting to see this as just ineptitude. But actually, it’s a whole lot worse.

In the Moses Kotane municipality in North West, one ANC councillor is due to appear in court for selling hand sanitiser to foreign-owned shops – and those who declined her generous offer were threatened with closure. There were other equally appalling tales of abuse of power which, if Ramaphosa’s statements are to be believed, should buy some members of his party some time in orange jumpsuits.

The president’s approval ratings, incidentally, are likely to get a large bump from his handling of the outbreak. But he risks losing that ground if he doesn’t lift Cele’s boot off the population’s throat, or if he drags his feet on putting thieving ANC officials in jail.

If Ramaphosa has led well, but has been constantly undermined by his own corrupt councillors, he’s done far better than US President Donald “It’s a hoax” Trump.

Trump, the statistics show, is a habitual liar. Politifact, the most credible source on fact-checking politicians, rates 69% of what Trump says as either “mostly false”, “false”, or “pants on fire” lies.

The Washington Post also has a fact-checker and according to its tally, Trump has made 18,000 “false or misleading claims” in his 1,170 days in the White House. Here’s a list of his biggest lies since the virus started.

But one of the more egregious lies was his obvious attempt to shift the blame to the World Health Organisation (WHO) for his country’s runaway Covid-19 numbers – at last count 757,000 infections and more than 40,000 deaths.

Last week, Trump announced that he was halting US funding for the WHO. Read here, in this Washington Post article, just how dishonest a move that was (the best place to read it if you’re not registered on washingtonpost.com is here.

Of course the WHO isn’t unimpeachable. Its hand-wringing over condemning China’s barbaric wet markets is a case in point. But as award-winning journalist Dana Milbank chronicles, 15 officials from Trump’s own administration were working inside the WHO from the first day of the Wuhan outbreak. So as usual, Trump is throwing his own officials under the bus.

Right now, SA is inching towards lifting the lockdown. It will be a phased uplifting, though: expect more shops, more businesses and restaurants to be the first given a licence to operate in a semi-liberated economy.

But the bad news is, if the rate of infection keeps rising, it’s possible that we may then have another hard lockdown later – maybe some time in June.

Intuitively, you’d have to think that Ramaphosa’s lockdown slowed the spread of the virus, protected our hospitals from exhaustion by flattening the curve, and ultimately saved lives.

But is that really true?

One of the best sources of Covid-19 news is Stat, a health news organisation based in Boston, which has been consistently at the front of this story.

There you can read a blistering assessment by Stanford University professor of epidemiology John Ioannidis, who argues that the Covid-19 response from governments across the world has been, in his words, a “fiasco”.

The “evidence” used to make policy decisions has been abysmal, Ioannidis argues. But as the epidemic drags on, and more countries adopt draconian countermeasures, “how can policymakers tell if they’re doing more good than harm?”

Without proper data, he says, we’ve only had extreme measures and “unfortunately, we do not know if these measures work”.

What Ioannidis wants is more evidence and better data to inform society so that if we decided to jump off a cliff, we’d have better odds of “landing somewhere safe”.

It’s an important point. SA’s economy is likely to lose more than 1-million jobs this year, pushing our unemployment rate beyond 45% (at the widest definition), and yet our policymakers only share the scantest information with us about their projection for what will happen with Covid-19, economically and epidemiologically.

It could be that by being coy with the data, they’re trying to control the news flow so that nobody panics. Or it could be that they just don’t have that information. Which is an even scarier prospect.

SHIRLEY DE VILLIERS: How Ramaphosa is being undermined by his own ministerial clowns

The drop in trauma cases and violence has been significant, leaving hospital beds open for Covid-19 cases, researchers say
Features
11 months ago

During this lockdown, some of our politicians have let their masks of ‘commitment to democracy’ slip
Opinion
11 months ago
Next Article

Lockdown day 24: Pictures of the day

Necessity: The mother of innovation

A bad week for Ace Magashule

Lockdown day 24: Pictures of the day

Necessity: The mother of innovation

A bad week for Ace Magashule