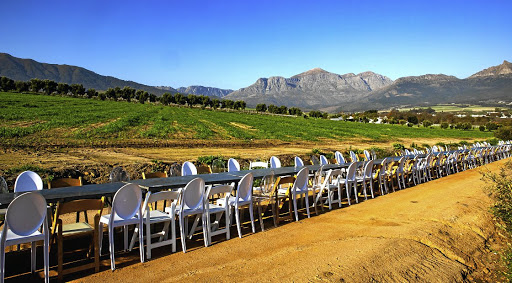 Left out: A 200m table with a 1,000 seats on the Bosman family farm in Wellington raises awareness of the jobs lost within the hospitality industry due to the national lockdown. Picture: Gallo Image/Jacques Stander

Not only is SA’s R500bn stimulus response to Covid-19 failing to get to those on the ground fast enough, it’s not sufficient to counter unemployment and rising social tensions.

With less than half the promised package coming from "new money", and a large chunk (R130bn) from reprioritising the existing budget, SA’s response, amounting to 10% of GDP, lacks the firepower of those of, say, Germany or Japan, which capitalised on fiscal prudence to roll out packages of 35% and 20% of GDP respectively.

Globally, almost $12-trillion in monetary and fiscal stimulation is being pumped into the financial system — the highest since World War 2. SA’s R500bn (about $26bn) response is a drop in the ocean, and what resources we have are being hampered by three headwinds.

The first is that SA entered this crisis on its knees. Even before lockdown, the country had recorded three quarters of negative growth. Now, looking at an expected contraction of -7% for the year, according to National Treasury and Reserve Bank estimates, it’s clearly staring down a depression.

Second is that population growth has been outstripping growth in the economy for years. This was evident during the late 1980s, and it’s steadily led to greater social tension and growing unemployment, as has been the case over the past three years. Unemployment rose to 27% before the pandemic, and could worsen to between 35% and 40% in the coming months.

Third is a powder-keg combination of corruption and poor execution. Without this two-pronged and sizeable headwind, the size of our stimulus would be less of an issue. 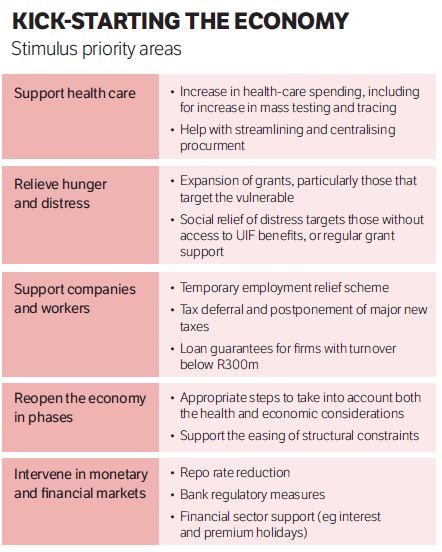 The government clearly recognises the problem, with President Cyril Ramaphosa making it clear that tackling Covid-related corruption is a priority. But the proof of the pudding will be when someone finally gets prosecuted.

Potentially the biggest sticking point is how SA executes the stimulus. This applies to the R500bn package, which is designed to help the country through the pandemic and restart growth, and to the R270bn infrastructure development programme that’s intended to kick-start the economy.

We’ve heard the infrastructure numbers before, during Ramaphosa’s investment summits, so this form of stimulus is not new. All that’s needed is effective implementation — the government’s Achilles heel. Already we are seeing how rollout challenges are affecting the stimulus package across the key priority areas.

Assessing the progress across these five areas shows the cracks in implementation. Based on our analysis, overall progress in instituting the R500bn stimulus scores a success rate of below 40%.

Only one green light offers some hope: the actions of the Bank in cutting rates by 3% in the year to date, which is equivalent to a R100bn injection. The Unemployment Insurance Fund temporary employment relief scheme benefit has also proved successful, with about R34bn of R40bn being paid out.

The drags include the fact that, by end-October, only half the social grants aimed at countering hunger and distress will have come into being — just as the programme is due to end. In addition, only a third of the special grants, equal to R350 per person per month, have been dished out. And only 6% of loan guarantees to small businesses have been applied.

While the early response to the crisis was strong and decisive, and Ramaphosa should be acknowledged for this, many aspects of SA’s response have been too slow, and the country simply doesn’t have sufficient resources. In addition, poor implementation and corruption are derailing the effort.

When it comes to the politics, the government’s strategy has been clear, if not always consistent: prioritise saving lives and securing the public health-care system first; ameliorate the economic impact and harm to livelihoods second. 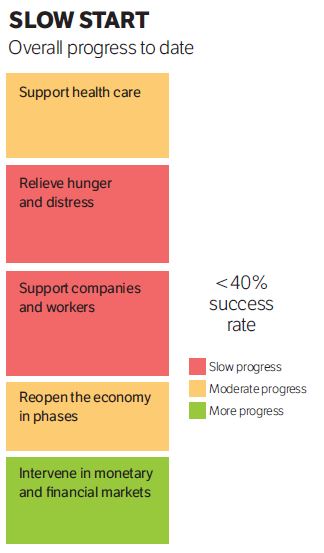 There is a sort of implicit Faustian pact at work here. Lives, especially those of poor people, will be saved at the expense of the livelihoods of many, and the profitability and even existence of significant numbers of businesses. In return, the government will throw money at the problem.

Herein lies the difficulty: going into this crisis, the fiscus simply didn’t have the muscle to provide anything near the scale of support needed. So cutting up and disbursing the available pie becomes fundamentally political: decisions must be made as to who gets what, when and how. There’s just not enough to go around.

The restaurant industry is a classic example, thrust into the spotlight recently by peaceful protests that were met not with a sympathetic ear but with violence, in yet another inexcusable example of heavy-handed "policing" that treats people as subjects, not citizens.

The pandemic has devastated the hospitality industry across the world. Social meeting spots are feared as places of potential contagion by customers and governments alike. And the economic downturn means people have less money to spend on such luxuries.

Some early studies suggest that global restaurant sit-down capacity has decreased by more than half during this period. One can imagine a far worse situation during the peak of the virus in one of the most affected countries.

The problem with the government is not so much the measures themselves, but its approach to deciding who should get what, when and how. Its record of consultation, and of listening to the concerns of economic stakeholders, is at best excellent (in respect of much of the retail sector, for example), and at worst wilfully and dogmatically negligent — as in the case of the tobacco and alcohol industries. They have been treated as purveyors of evil rather than as substantial employers and taxpayers.

The closure of any economic activity should be a last resort, and less restrictive means must be explored thoroughly with the respective sector. This was the principle that ostensibly sat at the centre of the "risk-adjusted strategy" — to pick the economic sweet spots where the economy could be reopened with maximum positive impact on livelihoods but minimum risk to lives.

The other side of the coin is that the recovery package should have been focused like a laser on those industries, such as the hospitality sector, that employ a lot of people and are essential for other parts of the economy, such as tourism (which generates nearly 10% of SA’s GDP).

Yet, to conclude that the economic support package has failed, one needs to be clear on its original purpose, which was to provide fractional interim relief to the most vulnerable businesses and to workers laid off by the crisis, and to ease restraints on borrowing.

It was never meant to overcome the economic disaster in full, and nor could it.

Some businesses do receive a bit of government support; others get relief from the private sector (where some funds have been set up for small businesses) or from insurance claims. Beyond that, though, the painful truth is that loss is inherent in such a crisis, and, to use a legal maxim, the "loss lies where it falls".

The national mood has seldom been gloomier. A recovery plan, led by government and backed by business, is the last throw of the dice. But with ...
Features
11 months ago

A woeful 3.5% of the state’s R200bn loan scheme has been issued to desperate businesses. So what’s the hold-up?
Features
1 year ago
Next Article